The Department of Defense announced back in January 2014 that religious dress accommodations had been added to uniform guidelines on a case-by-case basis. 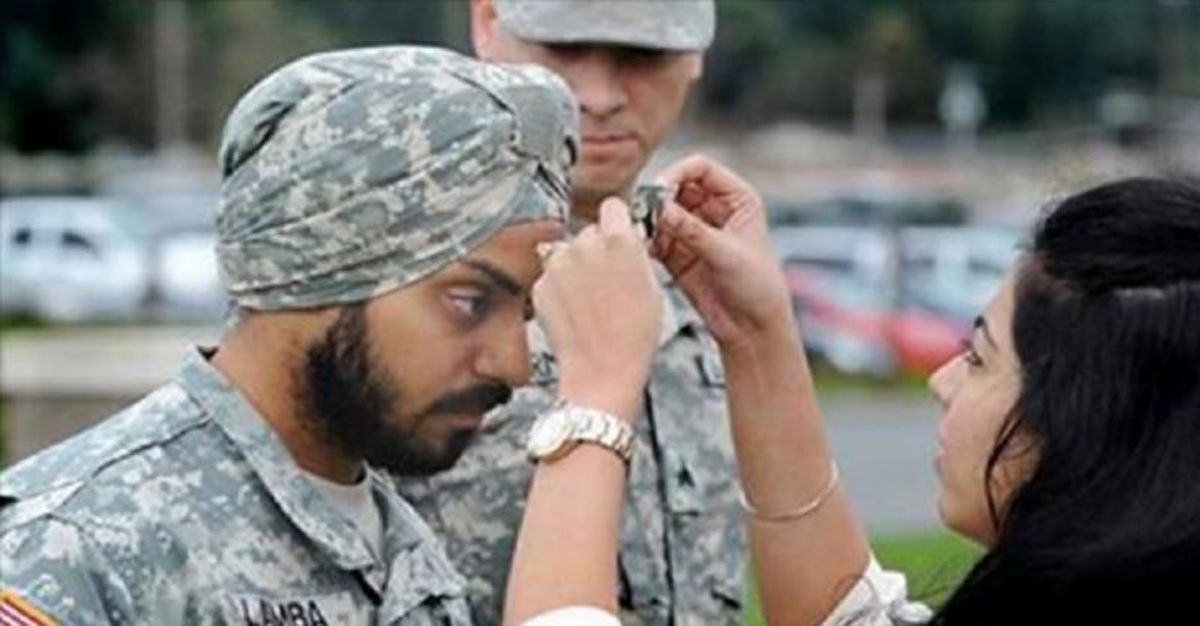 The Department of Defense announced back in January 2014 that religious dress accommodations had been added to uniform guidelines on a case-by-case basis.

U.S. military uniform regulations were not changed in response to "demands" from Muslims (and beards and turbans are a religious requirement of male Sikhs, not Muslims).

On 1 September 2014, the disreputable American News web site published an article whose clickbait headline stated that Muslims had "demand[ed] the Army change its dress code to include turbans and beards.

The article text itself made no mention of any such "demands" from "Muslims," however, but merely summarized an earlier Department of Defense (DoD) announcement regarding religious accommodation in uniform codes:

The Department of Defense released regulations to protect the rights of service members to wear a turban, scarf, or beard, to display their religious beliefs — as long as the practices don’t interfere with “military discipline, order, or readiness.”

“We welcome the important decision to broaden the religious rights of American military personnel,” a statement from the Council on American-Islamic Relations read, “We hope it will allow all those in uniform to practice their faith while serving the nation.”

The American News article about changes to military dress code regulations was dated 1 September 2014, but no such regulations were issued or updated on immediately prior to that date. Several months earlier, on 22 January 2014, the Department of Defense did issue a press release titled "DOD Releases New Religious Accommodation Instruction" via the American Forces Press Service which painted a far less alarming picture of the issue than the American News headline did.

In a 22 January 2014 statement, Pentagon spokesman Navy Lt. Cmdr. Nathan J. Christensen explained that as a result of a DoD instruction, allowance for religious dress accommodations would be added to U.S. military uniform guidelines on a case-by-case basis:

A DOD instruction implements a policy or prescribes the manner or plan of action used to carry out a policy, operate a program or activity, and assign responsibilities.

"The new policy states that military departments will accommodate religious requests of service members," Christensen said, "unless a request would have an adverse effect on military readiness, mission accomplishment, unit cohesion and good order and discipline."

Requests to accommodate religious practices will be assessed on a case-by-case basis, the spokesman noted.

Accommodation requests that require a waiver will be forwarded to the respective military department for determination.

Christensen elaborated on factors that could warrant a denial of accommodation:

The release concluded with a final quote from Christensen:

The Department of Defense places a high value on the rights of members of the military services to observe the tenets of their respective religions and the rights of others to their own religious beliefs, including the right to hold no beliefs.

On 22 January 2014, the Council on American-Islamic Relations (CAIR) issued a press release responding to the DoD's updated guidelines. The CAIR release made reference to a successful 2011 effort that resulted in the relaxation of Junior Reserve Officers' Training Corps (JROTC) dress codes to allow for religious attire:

The [DoD] policy now states: "Service member's expression of sincerely held beliefs (conscience, moral principles, or religious beliefs) may not be used as the basis of any adverse personnel action, discrimination, or denial of promotion, schooling, training, or assignment."

"We welcome the important decision to broaden the religious rights of American military personnel and hope this updated policy will allow all those in uniform to practice their faith while serving the nation," said CAIR National Executive Director Nihad Awad.

Awad noted that CAIR has dealt with past requests for religious accommodations by Muslim military and ROTC personnel.

In 2011, CAIR successfully urged the Department of Defense (DOD) to allow Muslim and Sikh students who wear an Islamic head scarf (hijab) or a turban to participate in the Junior Reserve Officers' Training Corps (JROTC).

At the time of the dress code update, CAIR spokesman Ibrahim Hooper said:

What we are seeing is not a revolution but an evolution in military policy. It sends a message that the military is friendly to minority faiths.

Jasjit Singh of the Sikh American Legal Defense and Education Fund said the updated guidelines were structured in such a way that they continued to discourage Sikhs (who are not Muslims) from military service:

Unfortunately, this continues to make us have to choose between our faith and serving our country. This is an expansion of the waiver policy that is decided person by person. It does not open doors and say you can apply as a Sikh American and serve your country fully.

It has been a work in progress, but we were hoping they would go further. What we want is not to be an exception. Sikh Americans want to be able to serve their country as any other Americans are allowed to do.

The updated regulations affected a number of faiths and was supported by interfaith groups. A New York Times article quoted the leader of a Sikh advocacy group and provided a short explanation of the effect the previous ban on beards and turbans had on Sikhs:

"There is still a presumptive ban, which would discourage any recruit," said Rajdeep Singh, director of law and policy with the Sikh Coalition, an advocacy group. "If I sign up to join the Army for example, and wear a turban, there's no guarantee my accommodation request will be granted."

Sikhism is a monotheistic religion founded in the 15th century in the Punjab region of what is today northwestern India. Five articles of Sikh faith were established to give Sikhs a sense of identity when they were chafing under the Islamic Mughal court of Delhi. The five articles are unshorn hair, a comb, a wristband made of iron or steel, underwear (a symbol of sexual modesty and personal hygiene) and a sword. The turban is worn as a sign of religious respect but also as a practical matter, to bind up long hair.

At least two requests for religious accommodation were denied by the Army in 2014.