Is This a Picture of Tulsi Gabbard with Antifa?

Gabbard, a 2020 Democratic presidential candidate, met with a number of veterans during the Standing Rock protests in 2016. 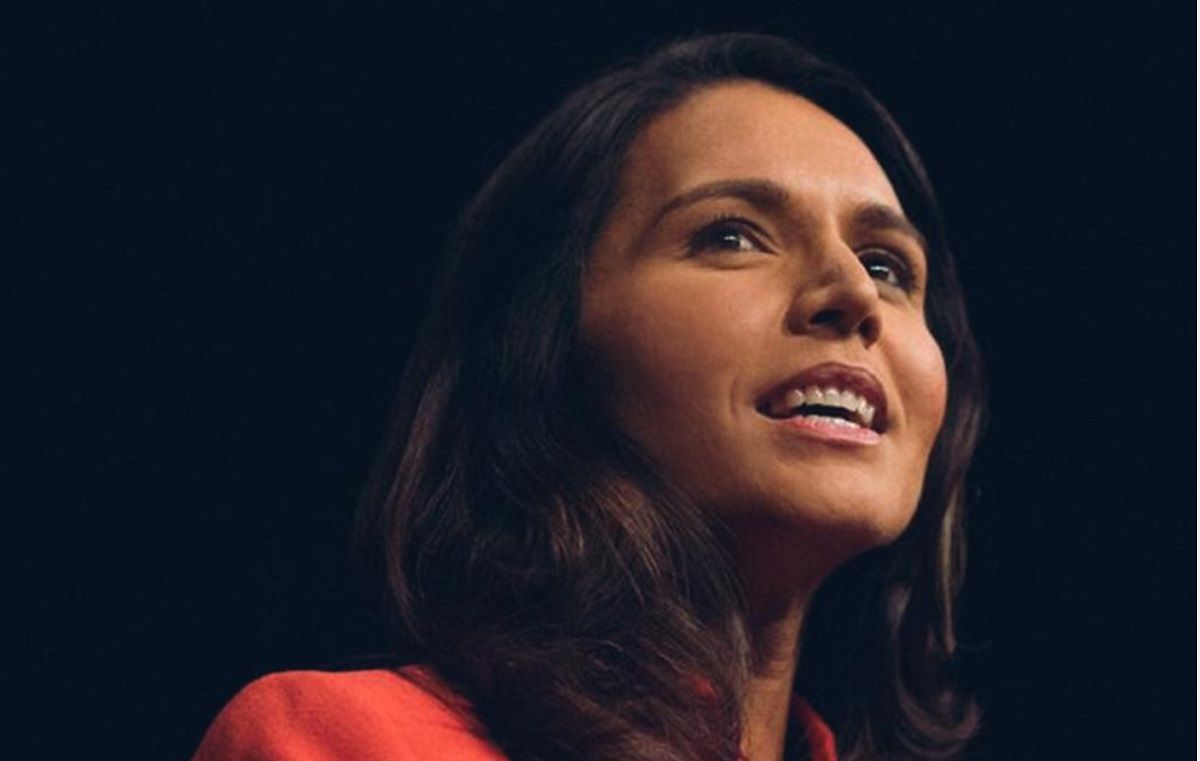 This photograph was taken at the Standing Rock protests in December 2016, not at an Antifa event, and it captures environmental protesters and not an "Antifa crew."

A photograph supposedly showing U.S. Rep. Tulsi Gabbard of Hawaii, a candidate for the 2020 Democratic presidential nomination, posing with members of Antifa (specifically with the "leader of Portland Antifa," Evan Duke), was widely circulated on social media in October 2019:

This is a genuine, undoctored photograph of Gabbard with Duke. (Gabbard is the woman in the center left of this image; Duke is standing just over her right shoulder.) However, this picture does not depict an "Antifa crew," nor is it evidence that Gabbard is an "antifa fascist fangirl."

Antifa is a political protest movement that opposes fascism, racism, and other extreme right-wing ideologies. The group has been involved in some violent altercations, however, and some critics have argued that Antifa deserves to be classified as a terrorist organization. Although this photograph truly shows Gabbard with Duke, the latter a supporter of Antifa, this picture was taken at an environmental protest in 2016 and (with the exception of Duke's presence) has little or nothing to do with the Antifa movement.

The photograph was taken in December 2016 during the Dakota Access Pipeline protests at the Standing Rock Indian Reservation in North Dakota. These protests were focused on environmental issues related to the construction an oil pipeline from the Bakken oil fields in North Dakota to central Illinois and not fascism.

Many veterans attended the Dakota Access Pipeline protests in support of the Native American tribes fighting for their land. Gabbard, who is also a veteran, traveled to Standing Rock to join "thousands of veterans from across the country to stand in solidarity with the Standing Rock Sioux in North Dakota who are protesting the construction of the Dakota Access Pipeline through their tribal lands," according to her press secretary.

Gabbard shared the viral photograph to her own Facebook page with the following caption:

Last Sunday night at #StandingRock, with fellow veterans at their camp. They established a command team and an operational TOC, and are assisting with safety and security operations in the camp. I'm honored to have met these incredible veterans, who inspire as they continue their mission of service. They are in this for the long haul, planning to stay until the drilling pad and construction equipment are removed. #nodapl #mniwiconi #waterislife #veterans

This photograph shows Gabbard with a group of veterans and environmental protesters in December 2016. The claim that it captured Gabbard posing with members of Antifa was based on the inclusion of Duke, who had been involved with the Standing Rock protests and the Occupy movement, and who has more recently shown support for Antifa and "Occupy Ice," a group that wants to see the Immigration Customs Enforcement agency abolished.

Duke provided the following caption when he shared this image to his Facebook page:

#NoDAPL #StrengthAndHonor Occupy/Veterans camp built an HQ and barracks for incoming vets at Standing Rock with donations from people across the United States. <3 We processed and housed as many people as we could on the ground during the blizzards. We were invited to be Tulsi Gabbard's security detail during her stay at camp. Before she left she came to our little plywood and 2x4 HQ to tell us how proud of us she was. With tears in her eyes she told us we were on the right path to creating the change this nation needs. We shed tears with her and said our Alohas. We taught her the Lakota word Doksha (until we see you again). Farewell relative. You are one of us! <3

We have been unable to find any statements from Gabbard regarding her position on Antifa. When asked if she would denounce the anti-fascist group by Turning Point USA in August 2019, Gabbard responded that she had already "denounced Antifa." However, we were unable to locate any interviews, news articles, tweets, or Facebook posts in which Gabbard denounced the anti-fascist group.

We reached out to Gabbard for comment on this photograph but had not heard back by press time.