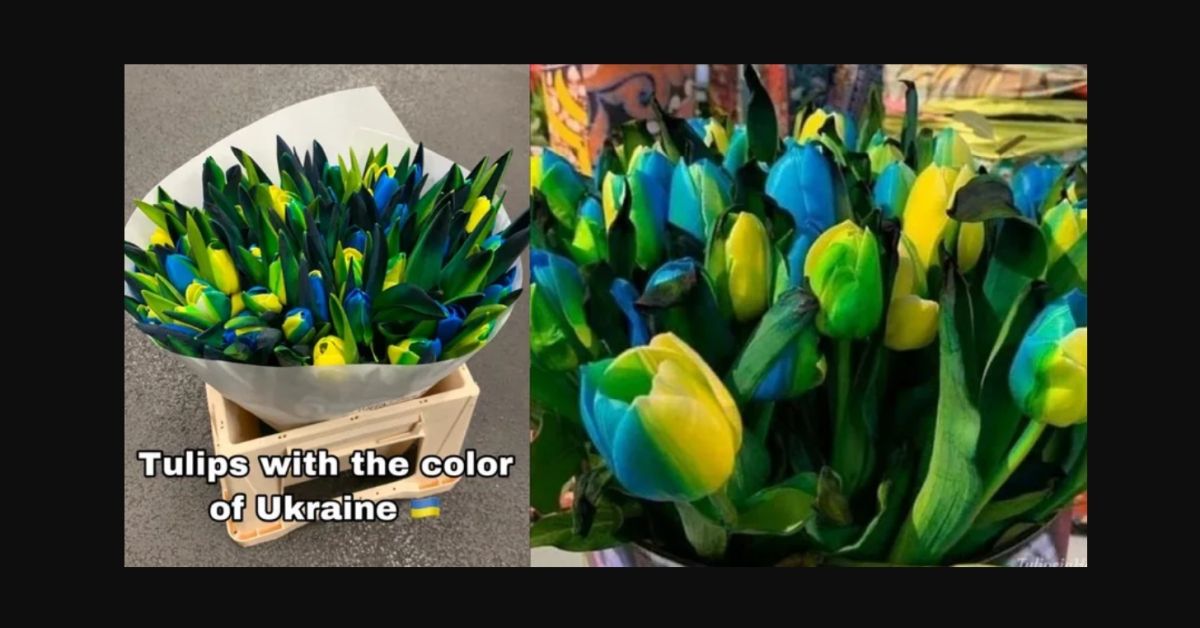 Image Via Tulips In Holland

Claim:
The "Tulipa Ukraine," a new breed of tulip bearing the colors of the Ukrainian flag, was created by a Dutch florist to honor Ukraine during the Russian invasion.
Rating:

There are genuine photographs of blue and yellow tulips created by a Dutch florist. However, these flowers weren't grown or bred in these colors. They were dyed blue and yellow to honor Ukraine.

In April 2022, a photograph was widely circulated on social media that supposedly showed a new breed of tulip called "Tulipa Ukraine" that was bred in honor of the country's struggle against Russian aggression. While this is a genuine photo of blue and yellow tulips that were created in honor of Ukraine, many social media posts incorrectly claimed that these flowers had been "grown" in this fashion, and that "Tulipa Ukraine" was a new breed of flower. But that's not the case. The tulips shown above were dyed these colors after they were grown.

The above-displayed photo was first shared to social media by TulipsinHolland.com. When social media users asked where they could purchase seeds to grow their own Tulipa Ukraine flowers, the website explained that they had been dyed blue and yellow:

The "Tulipa Ukraine" flowers shown above were created by Hoven & de Mooij BV, a flower shop in the Netherlands. This Dutch florist has created a few other versions of blue and yellow flowers in honor of Ukraine.

In March, the shop shared photos of two additional flowers that had been painted blue and yellow, and posted the message: "Our thoughts go out to the people of Ukraine. God bless and stay strong!" While the "Tulipa Ukraine" may bear the colors of the Ukrainian flag, this isn't the only flower that has been used to honor Ukraine since the Russian invasion. The sunflower, Ukraine's national flower, is now a symbol of resistance. The Washington Post reported:

The sunflower has long held a meaningful place in the hearts of many Ukrainians as the national flower. But since Russia invaded their country last week, the plant has become a global symbol of resistance, unity and hope.

In recent days, people around the world have been adding bright yellow sunflower emoji to their social media profiles and wearing sunflowers in their hair and on their clothing. Some are planting seeds so more sunflowers can grow.

In a video that recently went viral, a Ukrainian woman was heard telling armed Russian soldiers on Ukrainian soil, “Take these seeds so sunflowers grow here when you die,” BBC News reported.