Did Tucker Carlson Ask Hunter Biden for Help Getting His Son into College?

The Fox News host was once friendly with the president’s son. 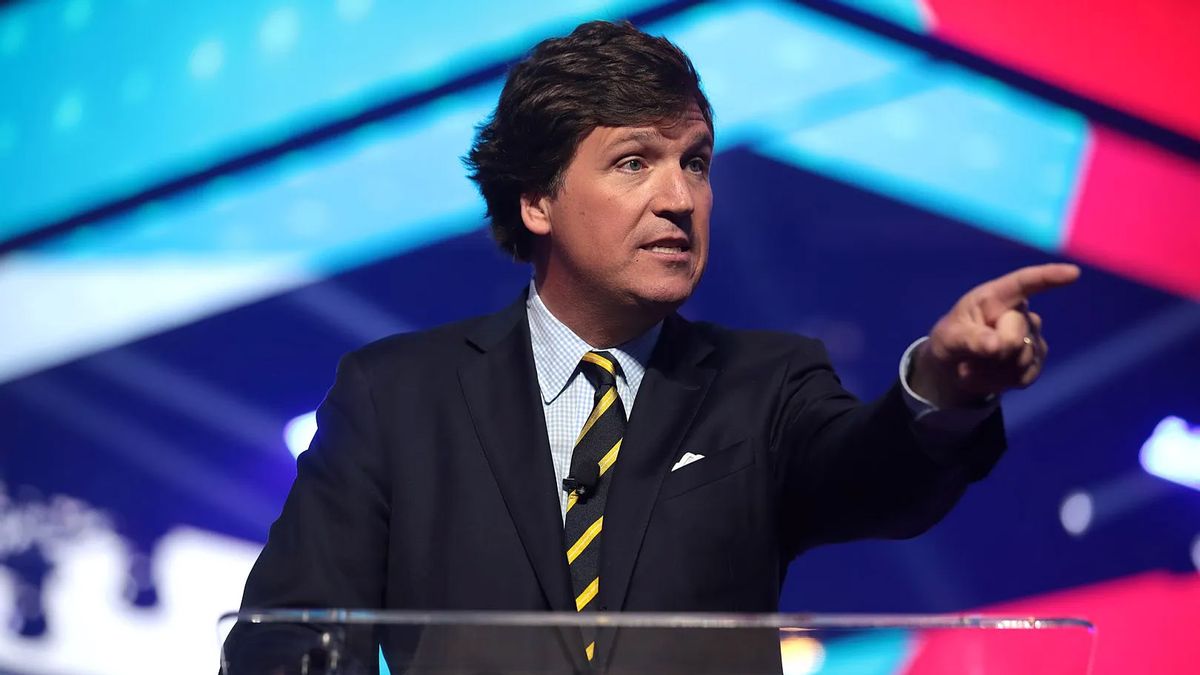 Claim:
Tucker Carlson emailed Hunter Biden asking for his help in getting his son into Georgetown University, including writing a recommendation letter.
Rating:

Since the 2020 elections, Fox News host Tucker Carlson has attacked U.S. President Joe Biden's son, Hunter Biden, for allegedly engaging in business practices by means of which Hunter allegedly benefited from his father's position. But just a few years ago, according to an internet rumor, Carlson was asking for the younger Biden's help in getting his son into college.

A meme going around claims that an email shows Carlson thanking Biden for writing a letter to Georgetown University on behalf of his son, Buckley. 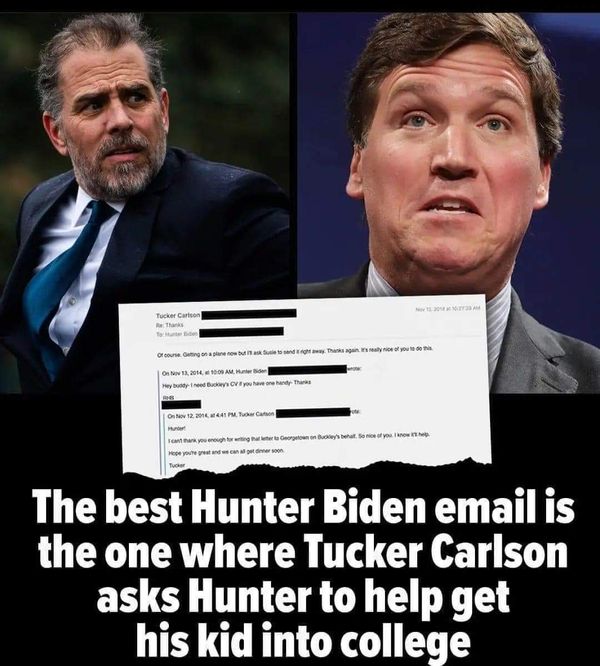 This claim is accurate. In 2014, when Joe Biden was serving as vice president, Carlson and his wife, Susie, reached out to Hunter Biden for help in getting their son into Georgetown University. Their email communication was revealed through forensic analysis of a laptop once owned by Biden that he had purportedly left at a Delaware computer repair shop in 2019. The laptop was obtained by Trump's then-lawyer Rudy Giuliani, and its contents pushed out to the New York Post in 2020. The correspondence on Biden's hard drive, a copy of which was also in the possession of the FBI, was largely used to investigate his overseas business dealings during his father's time in the White House, but also have illuminated more about the Carlson-Biden relationship.

The emails were given to The Washington Post on a hard drive by activist Jack Maxey, who received it from Giuliani. The Washington Post revealed the details of Carlson's and Biden's communication in May 2022, and was able to confirm with the help of forensic analysis and interviews with people familiar with the communications that this and other emails on the hard drive were real.

So what did Carlson actually say? The Post shared an image of a few of the emails in which he thanks Biden for writing a letter to Georgetown "on Buckley's [his son's] behalf." He added, "So nice of you. I know it'll help." 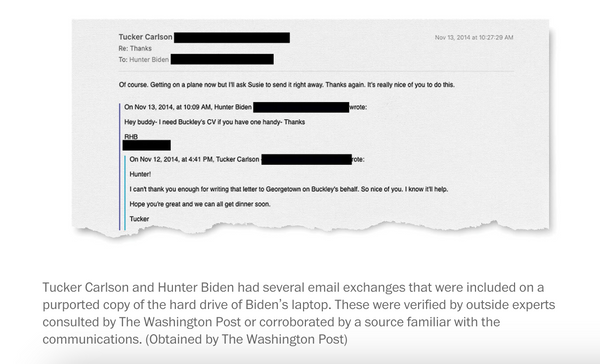 Carlson's wife wrote to Biden in 2014: "I realize you don't really know Buckley. Maybe you could meet or speak to him and he could send you a very brief resume with his interests and grades attached."

She also wrote: "Tucker and I would be so grateful if you could write a letter or speak to someone in the Georgetown Admission's Office about Buckley."

Biden wrote back that he would be honored to help. "I will do anything you would like me to do," he said.

Carlson described his son's interest in squash and fly fishing and wrote, "He loves Washington for all the right reasons, I think, and really wants to go to school here."

When Biden agreed to write a letter for Buckley, Susie responded with, "Tucker and I have the greatest respect and admiration for you. Always!"

Carlson admitted that he was once close with Biden in a phone interview with the Post. He said: "Hunter Biden was my neighbor. Our wives were friends. I knew him well. I talked to him many times about addiction, something I know a lot about. And I've said that. I think that Hunter Biden is an addict and that's why his life is falling apart, and I feel bad for him. I've said that many times, and I mean it."

He refused to discuss the emails, however, pointing (with apparent irony) to claims that the timing of the laptop's emergence in 2020 had the hallmarks of Russian disinformation. Previously, Carlson had dismissed and mocked claims of a Russian disinformation campaign as an effort by the establishment and tech giants to protect Joe Biden's 2020 election campaign. It is unclear if Biden ended up writing a letter, but Carlson's son did end up going to the University of Virginia.

"I can't confirm these emails. The emails that you're referring to were described by our intel community as Russian disinformation," he said. He added that he could not verify the emails as he did not have access to the account.

Since 2020, Carlson has regularly skewered the younger Biden on his show, accusing him of getting "lucrative jobs … because he had an important father."

He did say there were certain lines he would not cross, pertaining to the laptop. In October 2020, he said: "Much of the material on the laptop is of limited relevance to the public. [...] And by the way, if we're being honest, some of the exchanges between Hunter Biden and his father, and they are on there, too, reveal that whatever you say about them, Joe Biden really loves his son, and they're touching."

But following the 2020 election, Carlson's anti-Hunter Biden rhetoric grew, and he even poked fun at his addictions in an October 2021 segment: "So again, let's say you were a crackhead through your 40s, made a lot of pornographic videos mostly of yourself, your genitals covered in M&Ms, and then once you got to your 50s, decide, 'Hey, I want to be Andy Warhol. You probably couldn't do it unless your dad happened to be the president, and that's how Hunter Biden pulled that off."

Pengelly, Martin. "Tucker Carlson Tried to Use Hunter Biden to Get His Son into Georgetown." The Guardian, 20 May 2022. The Guardian, https://www.theguardian.com/us-news/2022/may/19/tucker-carlson-hunter-biden-georgetown-emails. Accessed 7 Dec. 2022.