The Fox News host used his show to promote election disinformation both old and new. 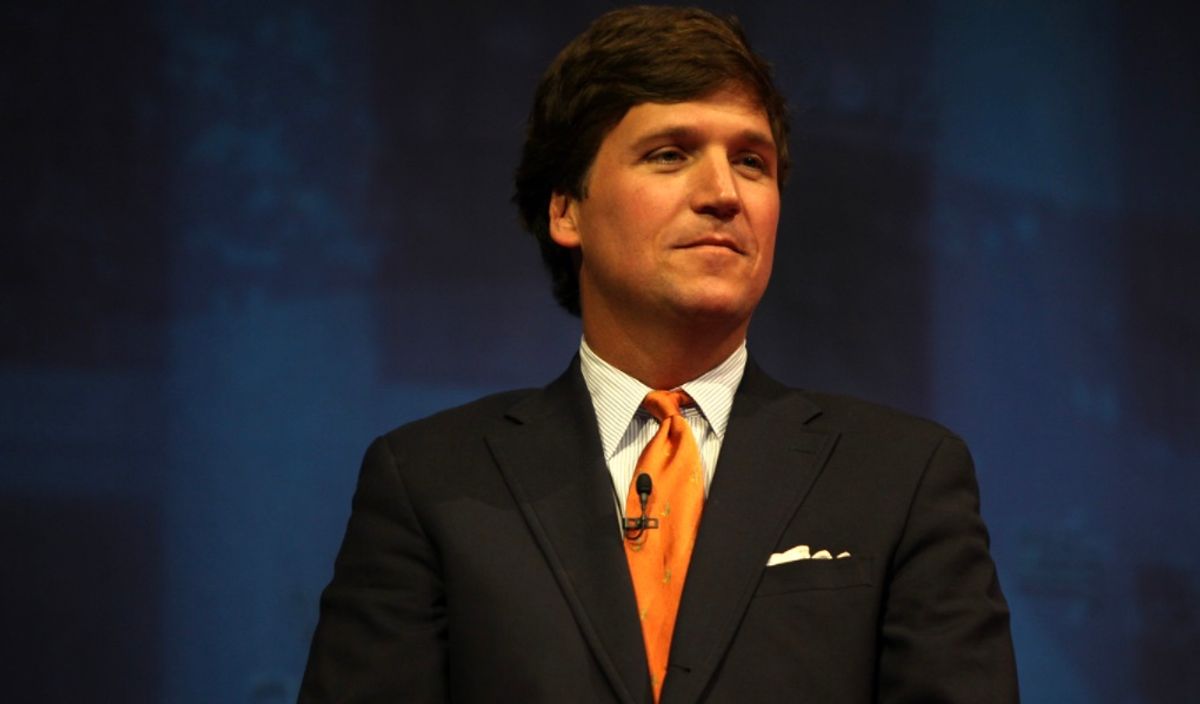 In the lead-up to and aftermath of the 2020 election, Trump and his supporters falsely claimed the election was "stolen" by means of a massive voter fraud conspiracy, but never presented evidence for these claims that withstood scrutiny. Trump's own Department of Homeland Security stated that the 2020 election, which took place during a pandemic, was, in fact, "the most secure in American history." Georgia's ballots have been counted three times.

None of the lawsuits put forward by Trump or his supporters were successful in court and in fact, Trump's attorney in the matter, Rudy Giuliani, had his law license suspended for spreading election lies.

Despite the fact that there is no evidence for claims of mass voter fraud and even though those claims have led to deadly violence, Carlson persisted in promoting them.

The segment that aired on July 14, 2021, contained various claims that have either been already debunked, or are statements based on supposition and lack evidence. (We note that Carlson's employer, Fox News, argued in a court case that Carlson's show shouldn't be viewed as factual.)

During his July 14 primetime show, Carlson stated, "It now appears there actually was meaningful voter fraud in Fulton County, Georgia last November." He later added, "That is not a conspiracy theory. It's true."

Carlson's July 14 segment cited the findings of an activist group called VoterGA. The group supports Trump's false claims of massive election fraud and has embarked on a search for evidence of said fraud.

The primary plaintiff is Garland Favorito of the group VoterGA, who has fought against Georgia's elections infrastructure for more than a decade, including a failed lawsuit against Georgia's old direct-recording electronic machines. Favorito has also questioned the authenticity of events surrounding 9/11, pushed conspiracy theories about former President Bill Clinton and the assassination of John F. Kennedy and is now serving as the latest vessel for false claims of fraud with the 2020 election.

We will now look at the claims Carlson made on his show.

The Alarm at the Fulton County Election Warehouse

The segment opened with a weeks-old piece of disinformation about an alarm sounding at an election warehouse in Fulton County. Carlson stated:

On a Saturday night in late May of this year, an alarm sounded in a big nondescript warehouse in Fulton County, Georgia. The warehouse was an unlikely place for a burglary. It was under round-the-clock surveillance by both private security and local law enforcement including armed deputies with the Fulton County Sheriff's Office.

Any unauthorized person entering from the outside would have to get past a locked 100-pound steel door, as well as a maze of motion detectors -- not easy -- but someone tried to do it, anyway and at just the perfect moment, 20 minutes after the deputies in charge of guarding the warehouse left their posts.

By the time those deputies returned to check out the alarm, someone had opened the 100-pound door to the warehouse. So, what happened that night? And why? We still don't know.

In fact, we do know.

Georgia Public Broadcasting reporter Stephen Fowler took to Twitter to point out that not only did Carlson use a photograph taken by Fowler without crediting him, the photograph was lifted from a story that explains why an alarm went off and what happened with the door.

Fowler reported in June 2021 that the alarm didn't come from the area where ballots were secured.

"The source of the alarm was a motion detector in an upstairs office belonging to the Clerk of Superior Court in the warehouse, and the county said a test showed that alarm is audible from where the private security officers were stationed off property."

As for who opened the door, it was law enforcement.

"The officers opened it themselves, and it was not 'left wide open,'" as pro-Trump media had reported at the time, Fowler explained in the report.

"Surveillance footage obtained by VoterGA appears to show large numbers of ballots being scanned multiple times," Carlson stated. In this segment, Carlson directed viewers' attention to a woman wearing a yellow shirt in a video he said was obtained by VoterGA.

But that video doesn't prove that the state's election results were falsified by ballots scanned multiple times, and importantly, Georgia's election results were recounted after the election, including by hand. That means that if any ballots were scanned more than once, in order for it to end up in the final vote tally, those ballots would have needed to have been counted more than once in both the heavily-scrutinized machine recounts and in the hand counts of the ballots.

The video used by Carlson was from a surveillance camera at State Farm Arena in Atlanta, where ballots were being processed on the night of the election. Investigators looked into allegations of fraud at that time and found no evidence of wrongdoing.

The closest Carlson came to offering an independent source for the figures he regurgitated from VoterGA was a July 13 report by the Atlanta Journal-Constitution (AJC). In doing so, not only did Carlson acknowledge that VoterGA is a problematic source on its own, he also misrepresented the Journal-Constitution's report. Carlson stated:

Now before you dismiss [attorney] Bob Cheeley and Voter GA as dishonest partisan actors, keep in mind that the strongly left of center "Atlanta Journal Constitution" appears to agree with this at least in outline. The newspaper reviewed the available digital ballot images independently and concluded that hundreds of ballots were improperly duplicated.

The AJC didn't report that "hundreds" of ballots were improperly duplicated. It reported that "nearly 200" ballots were scanned twice before a recount. An important part of the AJC report left out by Carlson was that there was "no indication any vote for president was counted more than once in official results."

The newspaper, which offered readers the opportunity to look at ballot images themselves, further reported:

The ballots counted twice would have given Biden 31 extra votes. After a recount, official results reflected that Trump gained a total of 121 absentee votes in Fulton. Biden won the county with 73% of 524,000 votes cast.

Although it's true that a small number of ballots were duplicated in Fulton County, the numbers are nowhere near as large as Carlson claimed; and contrary to what Carlson stated, the amount wouldn't have changed the outcome of the presidential election.

The source for this assertion is a July 13 news release posted by VoterGA which claimed that the group found "7 falsified audit tally sheets containing fabricated vote totals for their respective batches."

But a discrepancy between those two numbers is not evidence of fabricated vote totals or even of wrongdoing. At this time, we don't know how election workers sorted and counted ballots.

'None of the Ballots Had Any Creases on Them"

Carlson cited a "whistleblower" who stated she saw mail-in ballots without creases on them.

"That's strange because of course mail-in ballots need to be bent in order to be mailed in," Carlson observed.

Georgia election official Gabriel Sterling explained this to The New York Times in an interview published Jan. 4 about false election fraud claims being promoted by Trump and his supporters:

STERLING’S EXPLANATION: “Pristine” ballots aren’t unusual, Mr. Sterling said. For instance, many military and overseas voters receive electronic ballots that they print out, complete and mail back. But these printed ballots aren’t the right size for scanners, so election workers have a standard process for transferring the votes to scannable ballots. A ballot that gets damaged and can’t be scanned may be transferred in the same way.

The Claim That Voters Moved

""Nearly 35,000 Georgia voters moved out of their county of residence more than a month prior to election day," Carlson said. "They were ineligible to vote. And yet they did."

This claim comes from a July 12 story published by the pro-Trump website The Federalist. Although the article cites an "expert in voter data analytics and residency issues" named Mark Davis, it doesn't link to his work. It only reports that he compared two different databases, the U.S. Postal Service national change of address database and data from the Georgia Secretary of State's Office, and came up with a figure: 35,000 Georgians registered a change of address but voted in their old county.

But The Federalist admitted the reason for this isn't known and it may be perfectly legitimate in most cases:

While some of those nearly 35,000 voters may have been students, members of the military, or may have only relocated temporarily—situations which do not affect an individual’s residency for purposes of election law—everyone else in this group voted illegally under Georgia law. Now we are seeing from Davis’ further research that as of May 2021, more than 10,300 of those individuals have updated their voter registration to their new address, thereby confirming that the move they had previously informed the USPS of was permanent.

Insinuating that there were 10,300 votes cast by people illegally is pure supposition, however. No evidence is offered that this number, if accurate, represents 10,300 illegally cast votes. About that, The Washington Post reported that "If true — again, this is unproven third-party analysis — it’s illegal in the sense that going 67 in a 65 is illegal, not in the sense that you’re driving a stolen car."