Did Tucker Carlson Produce an Unusual Trailer for 'The End of Men'?

Some observers saw an undercurrent of homoeroticism in a video that contained plenty of shots of shirtless, muscular men. 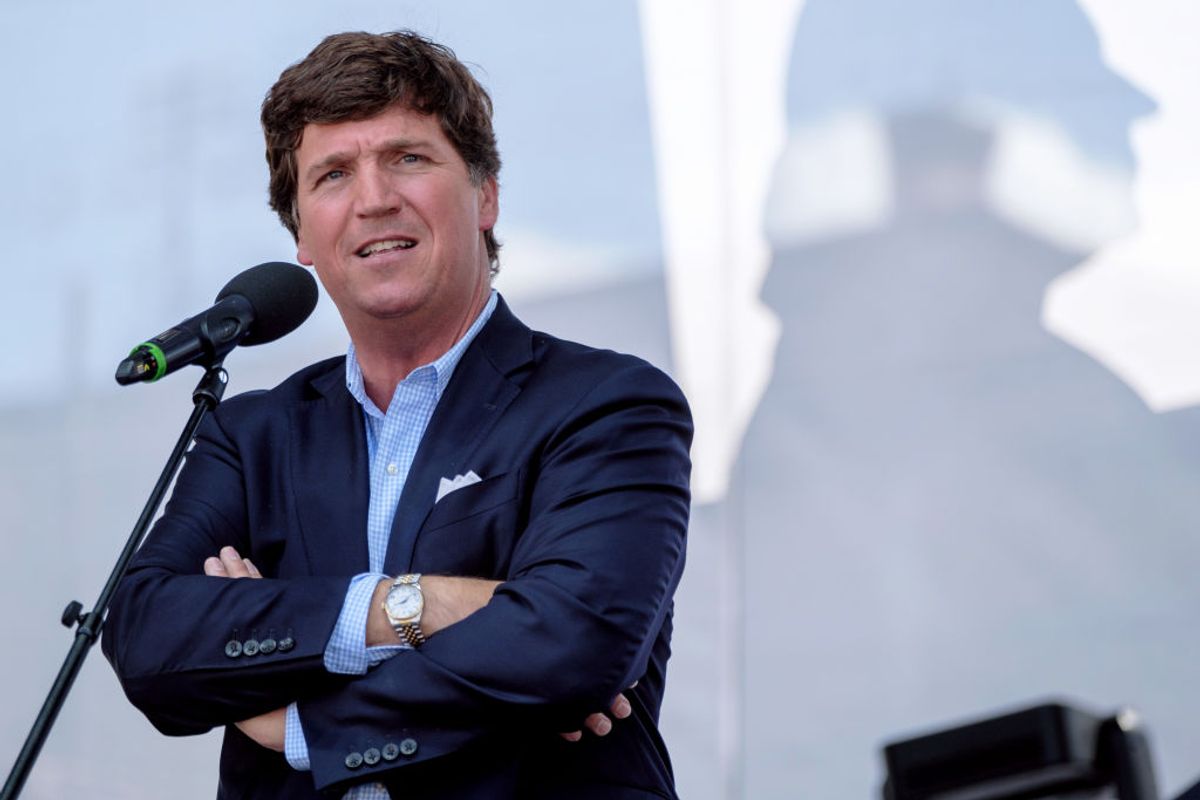 Claim:
A video shared widely in April 2022 showed an authentic trailer for a Tucker Carlson program entitled "The End of Men."
Rating:

The viral, 49-second clip was entirely authentic and was taken from a real trailer, which was posted to Carlson's own website on April 15. However ...

The shortened clip did cut out relevant expository framing and context that was included in the original, and gave the slightly misleading impression that Carlson's trailer consisted entirely of muscular, half-dressed men exhibiting their physical prowess.

In April 2022, some social media users reacted with bemusement to what appeared to be a 49-second excerpt from the trailer for a forthcoming program produced by right-wing Fox News host Tucker Carlson, entitled "The End of Men."

One widely shared clip, posted by Nikki McCann Rodriguez from the progressive Media Matters for America, contained slow-motion footage of muscular and shirtless men wrestling, working out and chopping wood, and an almost naked man who appeared to be tanning his genitals. The trailer culminated with a caption that read "Tucker Carlson Originals presents: 'The End of Men.'"

Social media users, primarily those ideologically opposed to Carlson, mocked the clip, describing it as homoerotic, while others questioned whether it was authentic or a parody. The clip was entirely authentic, but it was taken from a longer trailer published by Tucker on April 15, to promote the second season of his Fox News feature series "Tucker Carlson Presents."

It did give a slightly reductive and over-simplified impression of the trailer, which was more than twice as long, and contained more context than was shown in the clip. The trailer did contain what many observers might regard as an inordinate quotient of half-dressed, muscular men, but that's not all it contained. As a result, we are issuing a rating of "Mostly True."

The full two-minute, 13-second trailer can be viewed on Carlson's official Vimeo channel and was posted to his own website on April 15: Although the clip shared widely on Twitter did come from the authentic trailer, it contained less than half the footage of the original, and did slightly misrepresent the original, which contained expository framing and context, while the viral clip consisted almost entirely of muscular men displaying their physical prowess.

In order to demonstrate this discrepancy, and in the interests of thoroughness, the following is a lightly annotated transcript of the trailer:

Archive footage of President John F. Kennedy: I welcome this opportunity to speak to the people of America about a subject which I believe to be most important, and that is the subject of physical fitness.
Caption: IN AGES PAST / A CYCLE BEGAN / HARD TIMES / MADE STRONG MEN / STRONG MEN / MADE GOOD TIMES
Kennedy: A country is as strong, really, as its citizens, and I think that mental and physical health go hand in hand
Caption: GOOD TIMES / MADE WEAK MEN
Kennedy: There is nothing, I think, more unfortunate, than to have soft, chubby, fat-looking children. I hope that all of you will join, and everybody in the United States make sure that our children participate fully in a vigorous and adventurous life —
Caption: WEAK MEN / MADE HARD TIMES
Kennedy: — which is possible for them in this very rich country of ours.
Unnamed voiceover: There's been a 50 percent decline in sperm counts in the last 40 years, along with a precipitous decline in testosterone production. We're headed for a calamity. And that's not hyperbole, it's not exaggeration, it's just a mathematical fact.
Off-screen reporter asks Dr. Paul Turek: Would you recommend young men to tan their balls?
Turek: To what?

Caption: IN THE CURRENT YEAR / THE CYCLE CONTINUES
[Footage of an almost naked man who appears to be tanning his genitals]
Unnamed voiceover: Once a society collapses then, you're in hard times. Well, "iron sharpens iron," as they say. And those hard times inevitably produce men who are tough, men who are resourceful, men who are strong enough to survive. Then they go on to re-establish order, and so the cycle begins again.
Caption: TUCKER CARLSON ORIGINALS PRESENTS / THE END OF MEN.