Did Tucker Carlson Say He Was 'On Board' With Democratic Socialism?

The viral video clip appeared to cut off just as the Fox News host was building to a "but." 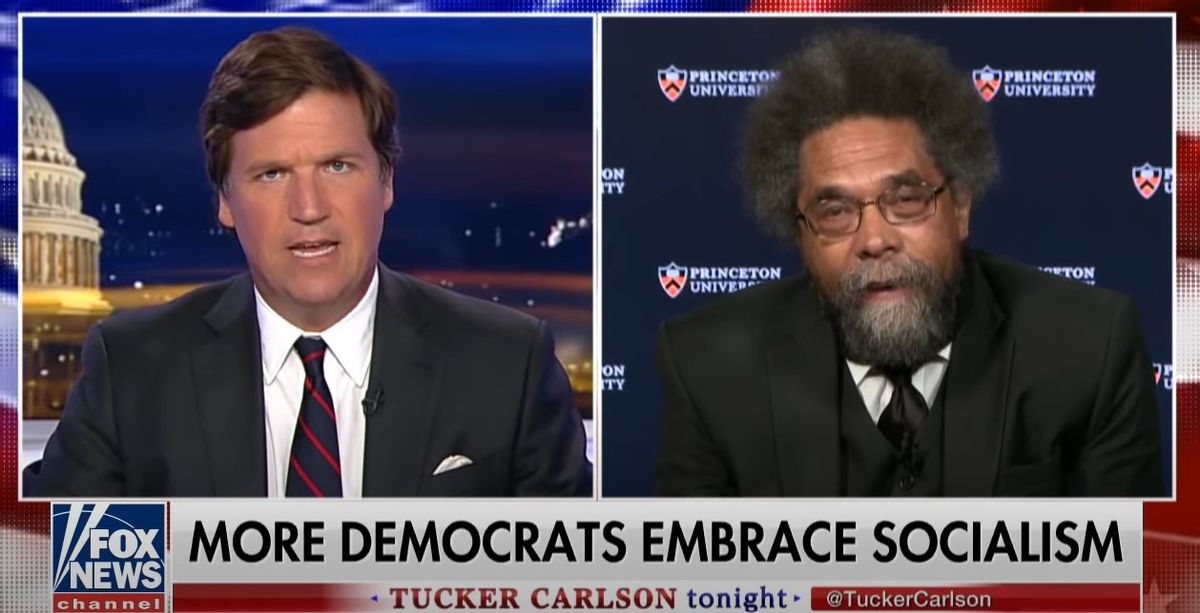 Claim:
A video shows Fox News host Tucker Carlson saying that he was "basically on board" with the tenets of democratic socialism.
Rating:

Carlson did say that he was "basically on board" with the goals of democratic socialism after political activist Cornel West described the ideology as working for the "dignity of ordinary people and making sure that they can live lives of decency."

However, a video clip (originally aired in 2018, not 2020) from the segment that went viral does not show Carlson's full remarks. In the full clip, Carlson says that while he agrees with the goal of democratic socialism, he doesn't think that the ideology has actually worked anywhere in the world.

On Sept. 18, 2020, a video clip started to circulate on social media that supposedly showed Fox News' host Tucker Carlson saying that he was "basically on board" with democratic socialism after his guest, political activist Cornel West, described the ideology as providing ordinary people the opportunity to "live lives of decency." One version of the video racked up close to 4 million views within a day of its initial posting:

This is a genuine clip of West and Carlson on the Fox News show Tucker Carlson Tonight. However, this clip did not air in 2020 (it's actually from 2018) and it doesn't capture Carlson's full comments about democratic socialism.

The clip comes from a July 2018 episode of Tucker Carlson Tonight. While the above-displayed clip is genuine, the footage is cut off right before the "but" Carlson was building to in his remarks and it doesn't fully encapsulate the Fox News host's position on democratic socialism. In the full clip, which can be viewed below, Carlson adds: "But the details matter [...] Has it struck you as interesting that it's never actually worked anywhere?"

Here's the full clip from Fox News. Carlson introduces West around the 2:20 mark:

A transcript of the relevant portions of this broadcast appears below. The first block quote shows the portion of this conversation that was included in the viral video. The first few lines (italicized) come just before the start of the viral video:

WEST: No, I don't think that democratic socialism as an ideal has been able to be embodied in a larger social context.

There's different forms of it. Some are bad, some are medium, some are better. But the fundamental commitment is to the dignity of ordinary people and to make sure they can live lives of decency.

So, it's not an -ism, no, brother. It's about decency. It's about fairness. It's about the accountability of the powerful vis-a-vis those who have less power -- at the workplace, women dealing with a household, gays, lesbians, trans, black people, indigenous peoples, immigrants.

How do we ensure that they are treated decently and that the powerful don't in any way manipulate, subjugate and exploit them.

CARLSON: I mean, if that's democratic socialism is, then I'm basically on board. I do think that ordinary people, middle-class people ought to have dignity.

CARLSON: And I think that our current systems make it hard for them to have dignity. So, I agree with all of that.

The following transcript shows the conversation that was left out of the viral video:

CARLSON: But the details matter.

WEST: That's precisely why - that's why Albert Einstein, Helen Keller, Norman Thomas, Eugene Debs, Martin Luther King Jr., Ella Baker, we can go on and on, they're all democratic socialists. Michael Harrington, one of the great founders of Democratic Socialism of America --

CARLSON: I understand. But has it struck you as interesting that it's never actually worked anywhere. So, the question is not what are our goals. Our goals are the same. How do we get there is the question.

So, what happened in Venezuela? They called that democratic socialism, but they don't have toilet paper, and it's less equal than ever.

In short, Carlson told West that he was "on board" with the general goals of democratic socialism, which were defined by West in their exchange as making sure that ordinary people can live lives of decency. Carlson disagreed, however, that democratic socialism was the political ideology that could achieve that goal.