Does This Photograph Show President Trump Visiting a WWI Cemetery in the Rain?

President Trump was widely criticized for skipping a ceremony commemorating the 100th anniversary of the end of World War I due to the rain, but he did attend another event (also in the rain) to honor the occasion. 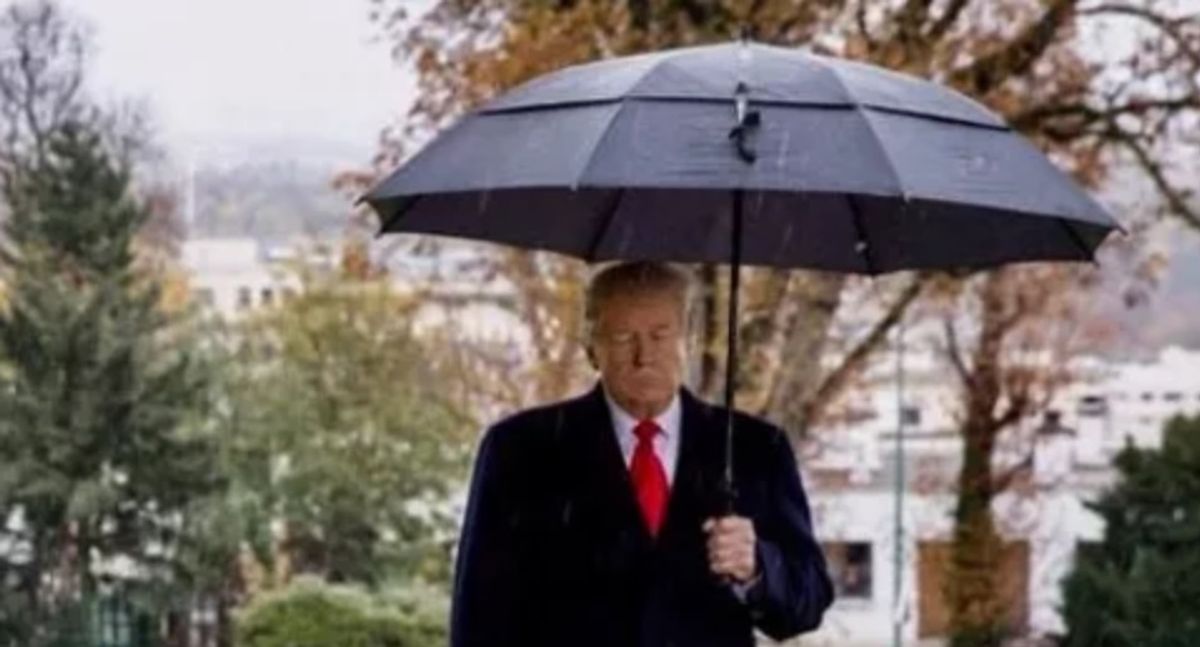 Claim:
Photographs show President Trump commemorating the 100th anniversary of the end of World War I at a cemetery in the rain.
Rating:

President Trump was widely criticized over Veterans Day weekend in November 2018 after he skipped an event at the Aisne-Marne American Cemetery in France commemorating the 100th anniversary of the end of World War 1 due to inclement weather.

Social media users chided Trump for bowing out of the scheduled event, which was attended by other world leaders such as Canadian Prime Minister Justin Trudeau, German Chancellor Angela Merkel, and French President Emmanuel Macron, sharing photographs of "real presidents" who had previously honored veterans while standing in the rain.

President Trump took issue with this coverage, however, and on 13 November 2018 he took to Twitter to explain his absence (asserting that his helicopter couldn't fly because of the rain) and proclaim that he had delivered a speech in the "pouring rain" the following day but that the event was "little reported" by the "fake news": President Donald Trump paid tribute on Sunday to Americans who fought in the two world wars, saying the nation is forever in their debt during a visit to a cemetery in France where more than 1,500 of them are buried.

“It’s been a wonderful two days we spent in France, and this has certainly been the highlight of the trip," Trump said in remarks that capped a weekend in Paris where he and more than 80 other world leaders marked the 100th anniversary of the end of World War I ...

Standing at the presidential podium under a steady rain without an umbrella, Trump joked to six World War II veterans about their enviable position keeping them dry.

“You look so comfortable up there under shelter as we're getting drenched,” Trump said, drawing laughter from the crowd. “Very smart people.”

“You look like you’re in very good shape, all of you,” he added. “I hope I look like that some day. America is forever in your debt.”

The ceremony in Suresnes certainly drew less attention on social media than Trump's absence at the Aisne-Marne American Cemetery the previous day did, but it isn't accurate to say that his visit to the Suresnes Cemetery was "little reported." In addition to the aforementioned NBC News report, Trump's speech was also covered by outlets such as CNN, USA Today, CBS News and Time magazine.

Despite this coverage, a number of social media users seemed surprised when they came across a photograph posted to Facebook by Dan Scavino, the White House Director of Social Media, which showed President Trump standing solemnly in the rain at a cemetery: Social media users took to the comments section to claim that this image was fake and that Trump had been digitally inserted into the picture. While it's possible that Scavino applied some sort of filter to this photograph (Trump's outline is surprisingly crisp), a number of similar pictures can be found via news outlets such as NBC News and photography agencies such as Getty Images: