The "Girther" conspiracy theory is based on false assumptions about how the human body can vary from person to person. 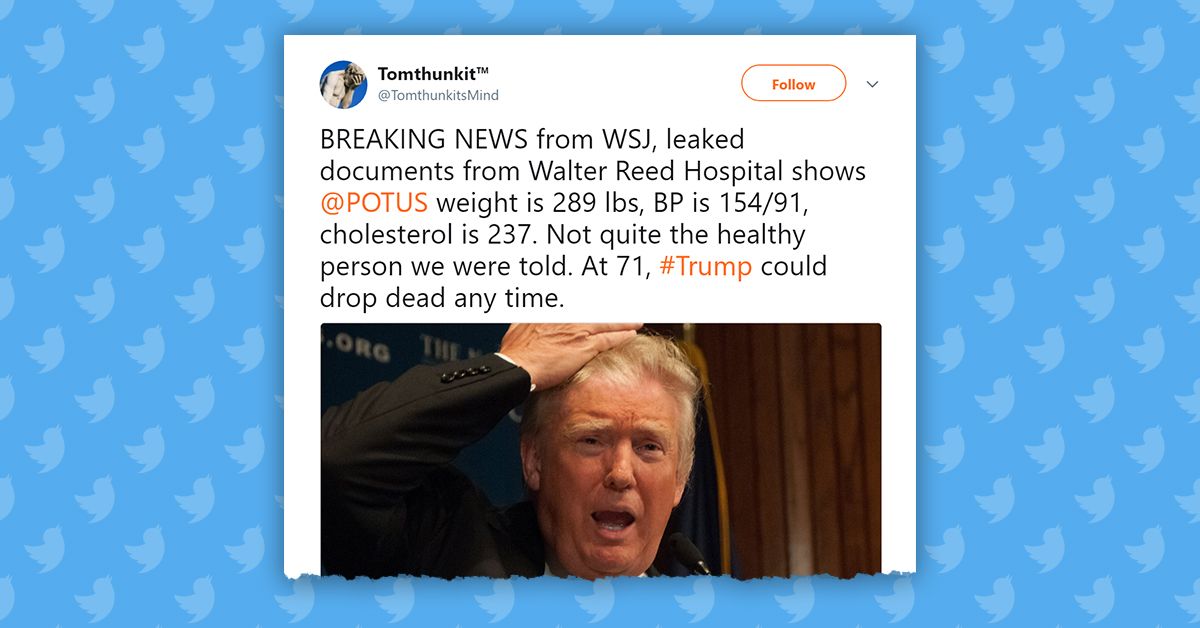 Some observers greeted the details of the "periodic physical exam" with skepticism, expressing doubt about Trump's weight, in particular, which Jackson listed as being 239 pounds, and his height, which he listed as 6'3".

This skepticism, which often comes from individuals who are otherwise critical of the president and his policies, and part of the loosely-defined anti-Trump "Resistance," has coalesced online into a self-described "Girther" movement, a reference to the "Birther" conspiracy theory which surrounded former president Barack Obama and which was championed by Trump himself.

In late April, Jackson was embroiled in controversy after reports emerged of an alleged pattern of drinking to excess while at work, overprescribing medication, and harassing colleagues. As a result of these allegations, Jackson withdrew from consideration for Veterans Affairs Secretary, a position for which Trump had nominated him.

Around the same time, the "Girther" movement crystalized into a full-blown conspiracy theory, claiming corrupt practices by the president in nominating Jackson for a cabinet position in return for the favor of — according to the theory — lying about his vital statistics.  In the midst of all this innuendo and outright allegation, a viral meme emerged which appeared to some to be the smoking gun. Although the exact wording has varied, the meme typically reads as follows:

BREAKING NEWS from [the Wall Street Journal], leaked documents from Walter Reed Hospital shows [sic] [the President of the United States] weight is 289 lbs, [blood pressure] is 154/91, cholesterol is 237. Not quite the healthy person we were told. At 71, Trump could drop dead any time.

BREAKING NEWS from WSJ, leaked documents from Walter Reed Hospital shows @POTUS weight is 289 lbs, BP is 154/91, cholesterol is 237. Not quite the healthy person we were told. At 71, #Trump could drop dead any time. pic.twitter.com/rbyAUyVsXi

In reality, the Wall Street Journal has not published any leaked documents from Walter Reed regarding Trump's physical condition.

Presidents of the United States are under no legal obligation to make their private health records public, but occupants of the White House (as well as candidates) typically agree to do so as a matter of convention.

For someone who has custody over a sitting president's medical records to disclose those records without the consent of the president would most likely be a serious violation of HIPAA, the Health Insurance Portability and Accountability Act, a 1996 law signed by then-president Bill Clinton. HIPAA states:

There is absolutely no evidence that anyone has done this with Trump's private medical records, nor that the president's physical condition was not accurately described in Jackson's January 2018 examination report. The Wall Street Journal has certainly not published anything resembling a "leak" of Trump's "true" physical examination.

Those who attempt to attack the credibility of Trump's officially-recorded weight by comparing photographs of the president with elite athletes are basing their skepticism on false assumptions about the relationship between height, weight and body fat. Body shapes and types vary from person to person, based on several factors, and not everyone who weighs 239 pounds and is 6'3" has a muscular build, or is required to have one in order to meet that weight at that height.

Dr. Martin Binks is an associate professor of nutritional sciences at Texas Tech University and an expert in obesity and metabolism. While he did not specifically address the case of President Donald Trump, Binks explained the science to us:

Observations of weight status made based on a fully clothed individual’s appearance are inappropriate..."Appearance", when it comes to body composition and health risk, is basically useless (as is weight). Two people of equal height and weight may have vastly different body composition based on relative differences in body fat, bone density, muscle and water retention.

Weight by itself is not a "meaningful gauge" of a person's health, Binks added, and sometimes fat deposits that are not visible to the casual observer can be more strongly associated with health risks than are visible ones:

Visceral fat deposits — those for example surrounding and within organs, typically beneath the muscle — are associated with greater health risk. Yet someone may appear to have considerable visible body fat (subcutaneous) immediately beneath the skin, which is associated less strongly with health risk.

Not only is there no evidence of a conspiracy to suppress the president's "true" weight and mislead the American public, but the "Girther" theory is based on a fundamentally flawed understanding of how the human body can vary from person to person.