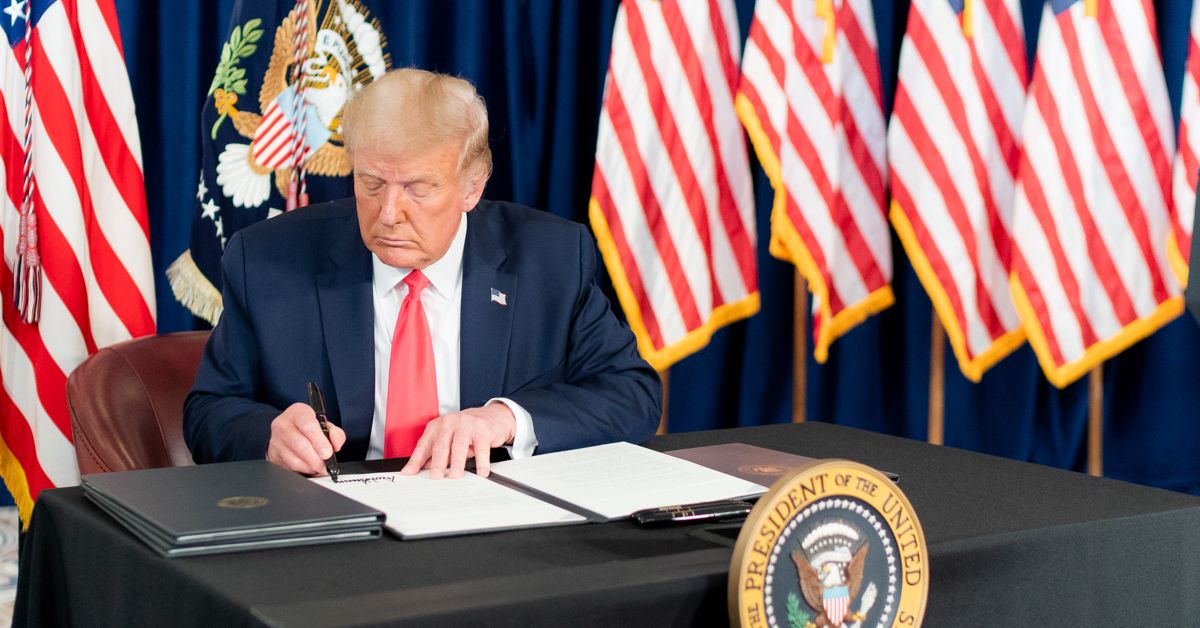 On Aug. 8, 2020, U.S. President Donald Trump said he intended to "terminate the tax," referring to Social Security and Medicare payroll taxes. It's a step that would — if taken in isolation — remove nearly 90% of funding for Social Security benefits, and thus likely pose a threat to the continued existence of those programs.

It's unknown whether Trump had a plan to replace the shortfall in Social Security funding in the event that he eliminated payroll taxes.

In the summer of 2020, less than three months before that year's U.S. presidential election, several readers asked Snopes to examine the accuracy of reports that President Donald Trump had vowed to "terminate" Social Security.

On Aug. 8, 2020, the non-profit group Social Security Works published a news release with the headline "Donald Trump: If Re-Elected, I Will 'Terminate' Social Security." In the press release, the group's president Nancy Altman wrote:

Social Security is the foundation of everyone’s retirement security. At a time when pensions are vanishing and 401ks have proven inadequate, Trump’s plan to eliminate Social Security’s revenue stream would destroy the one source of retirement income that people can count on. Moreover, Social Security is often the only disability insurance and life insurance that working families have. If reelected, Trump plans to destroy those benefits as well.

On the same day, left-leaning website Common Dreams posted an article whose headline read, "Donald Trump Just Admitted on Live Television He Will 'Terminate' Social Security and Medicare if Reelected in November." The Common Dreams article stated that "President Donald Trump openly vowed to permanently 'terminate' the funding mechanism for both Social Security and Medicare if reelected in November ... Announcing and then signing a series of legally dubious executive orders ... Trump touted his order for a payroll tax 'holiday' — which experts noted would later have to be paid back — but said if he won in November that such a cut would become permanent."

Trump did not explicitly vow to terminate Social Security, as those headlines claimed, but one of several plans he mentioned in an Aug. 8 press conference involved eliminating payroll taxes — a move that would, as things stand, remove the overwhelming majority of funding for Social Security and likely pose a threat to its continued existence.

On Aug. 8, the White House published a raft of executive orders and memoranda, including one on "Deferring Payroll Tax Obligations in Light of the Ongoing COVID-19 Disaster." That memo read, in part:

(a) The deferral shall be made available with respect to any employee the amount of whose wages or compensation, as applicable, payable during any bi-weekly pay period generally is less than $4,000, calculated on a pre-tax basis, or the equivalent amount with respect to other pay periods ...

In other words, employees who earned less than the equivalent of $100,000 per year — before taxes — would have their payroll taxes deferred from September until the end of the year. (This means they would not pay payroll taxes for four months, but would be expected to pay them at a later date).

On Aug. 8, Trump announced his executive actions at a press conference held at his golf club in Bedminster, New Jersey. During the course of his remarks, Trump referred to the payroll tax deferral, saying, "In a few moments, I will sign a directive instructing the Treasury Department to allow employers to defer payment of the employee portion of certain payroll taxes from September 1."

However, the president made additional remarks that were not contained in the memorandum itself, indicating that he intended to extend that deferral beyond Dec. 31, 2020; to waive any later obligation on employees to pay the deferred contributions; and even that he planned to eliminate payroll taxes entirely. The following is an edited transcript of the relevant section of his remarks. (A full transcript of his press conference is available here, and his remarks can be viewed in full below.)

"If I'm victorious on November 3rd, I plan to forgive these taxes and make permanent cuts to the payroll tax. So I’m going to make them all permanent ... If I win, I may extend and terminate. In other words, I’ll extend it beyond the end of the year and terminate the tax. And so, we’ll see what happens."

Trump articulated several intentions in that section of his speech.

First, he said he planned to "forgive" the payroll taxes in question, meaning that rather than simply being delayed, the obligation to pay those four months' worth of Social Security and Medicare taxes would be removed entirely. Second, he said he planned to "make permanent cuts to the payroll tax," suggesting that the rate at which Social Security and Medicare contributions are withheld would be reduced from 6.2 % and 1.45 %, respectively. Third, Trump said he would "extend" the payroll tax deferral beyond Dec. 31. Finally, Trump said he would "terminate the tax."

Although Trump articulated several plans for payroll taxes, it remains the case that he did at one point say he would "terminate the tax." Doing so would remove the overwhelming majority of funding for the two benefits that comprise Social Security: Old-Age and Survivors Insurance (OASI), and Disability Insurance (DI), known collectively as OASDI. According to the federal Social Security Administration, fully 89% of OASDI came from payroll taxes in 2019.

It is reasonable to suppose that removing so much funding for Social Security, without replacing it, would pose a threat to the continued existence of Social Security itself and its associated OASDI benefits. In his Aug. 8 remarks, Trump made no reference to a plan for replacing the funding that would be lost if he carried out his stated intention to terminate payroll taxes, nor has he done so anywhere else. (Snopes asked the White House and the Trump campaign to provide details on how the president intends to cover the shortfall in Social Security funding, but we did not receive a substantive response from either.)

Since Trump has publicly articulated an intention to eliminate payroll taxes, and he has not accompanied that with any proposal to replace the taxes as a source of Social Security funding, it is reasonable to argue that, as Social Security Works and Common Dreams did, Trump's payroll tax proposals, as they stand, could effectively spell the end of Social Security.

However, it should not be ignored that, in the same Aug. 8 speech, Trump also articulated several other plans in relation to payroll taxes, and that at least one of those plans was mutually incompatible with "terminating the tax," since Trump could not initiate "permanent cuts" to payroll taxes if those taxes no longer existed. As a result, we are issuing a rating of "Mixture" for this claim.

Previous Article
Next Article
Article 6 of 38 in Collection