The description of the alleged product says, "Make your company great again!" 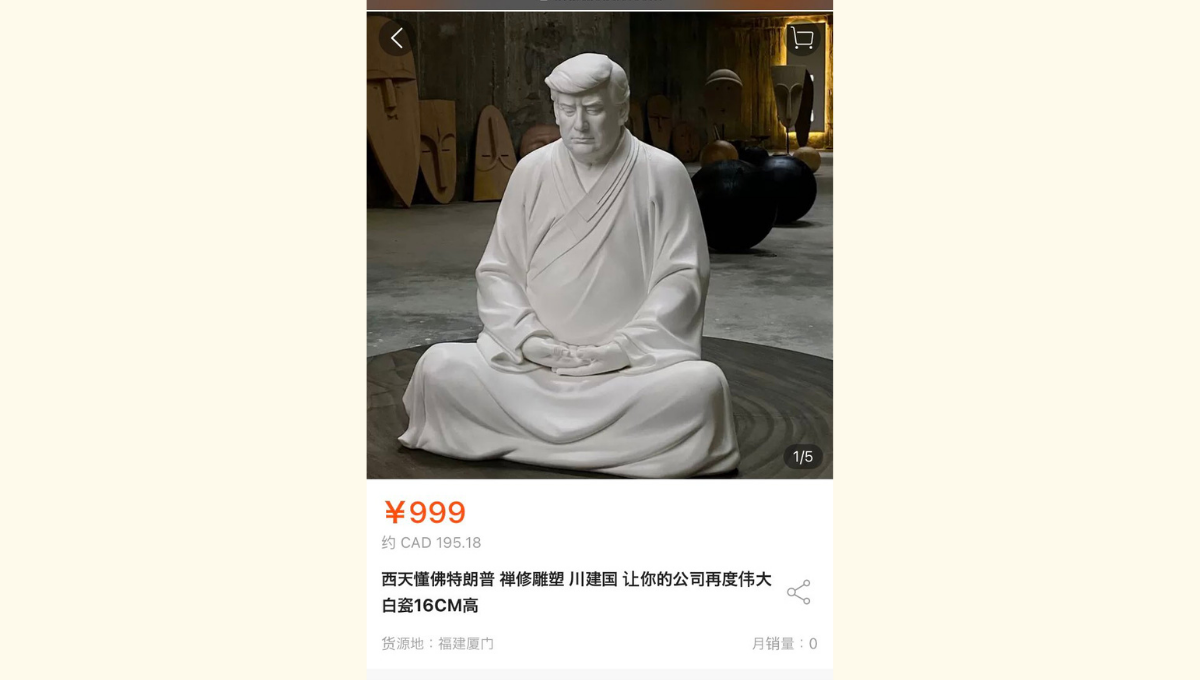 In March 2021, Snopes became aware of viral pictures supposedly depicting a ceramic sculpture of former U.S. President Donald Trump wearing a monk's robe and sitting in a meditative pose that resembled Buddha. We sought evidence to determine whether the figure existed in the physical world. The Global Times, a state newspaper, first reported on the sculpture on March 9, saying a vendor listed the item on the e-commerce site Taobao with the caption, "Make your company great again!"

That story included quotes from the sculpture's alleged creator and someone who supposedly bought the figurine from the online vendor. However, the article did not identify those sources nor provide a reason why, exactly, they were granted anonymity.

"I bought it for fun and put it on my desk at home as a decoration," a buyer from Shanghai supposedly said. "Trump can also be regarded as a representative of an era, and extreme egoism. Now the era has passed but I want the statue to remind me: Don't be too Trump."

Then, days later, The New York Times published a separate story on the piece of art, featuring an interview with Hong Jinshi, a 43-year-old furniture maker and decorator in southern China.

He not only confirmed that he created the ceramic statue of Trump but elaborated on his artistic process, as well as his experience selling the product.

"[Trump] is still having fights with all kinds of this and that every day," Jinshi said. "So I think this image is exactly the opposite extreme of him and his personality."

Using Taobao (which The Guardian said is a popular source of Trump merchandise), Jinshi was selling the sculpture in two sizes — 6 inches and 18 inches — for the price of $153 and $615, respectively. As of the publication of the Times story, he had sold roughly 100 of them. The news outlet reported:

Mr. Hong considers the Trump Buddha a work in progress. He said the wrinkles on Mr. Trump’s lips are too deep, creating an effect incongruous with his vision. He said he has given no thought of creating a sculpture of Mr. Biden, though he is fascinated by another prominent American entrepreneur, Elon Musk.

As word of the Trump product spread online, other vendors copied the artist's work and listed those knockoffs for cheaper prices. Jinshi told The New York Times he reported the pirating to Taobao but, ultimately, the perpetrators found ways around any restrictions.

In other words, pictures of various versions of the sculpture circulated online and not all were authentic products of the original artist, Jinshi. However, considering his interview in a reputable news outlet that confirmed the existence of the sculpture of Trump in a contemplative pose evoking Buddha, we rate this claim "True."

It was far from the only viral statue of the former president.

See here for our fact check to determine the validity of a video purportedly showing attendees of the 2021 Conservative Political Action Conference (CPAC) wheeling in a gold-colored statue of Trump to the event venue, as well as this report that investigated whether a photo indeed captured people praying for or bowing before that statue.