Trump Gets a Spray Tan Before Appearing on Television?

A photograph purportedly showing President Donald Trump getting a spray tan before a television appearance actually features a wax replica of him. 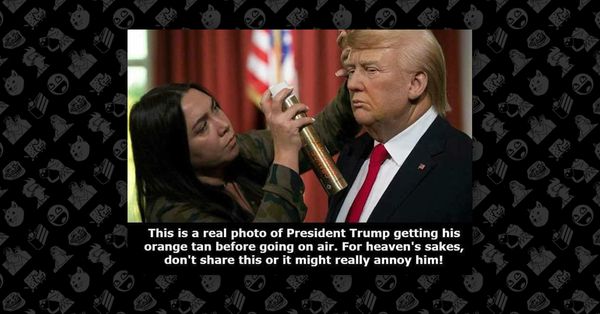 In August 2017, an image appeared purportedly showing President Donald Trump getting a spray tan before a television appearance: This photograph is real. However, it does not feature President Donald Trump, but a wax replica of him. The photograph was taken by Chris J. Ratcliffe for Getty Images on 18 January 2017, during the unveiling of the President Trump wax figure at Madame Tussauds wax museum in London:

The inauguration is still a few days away, but this "Donald Trump" has already moved into the Oval Office.

Madame Tussauds in London, famous for immortalizing the famous in wax, unveiled their figure of the president-elect on Wednesday, who stands proudly in a replica of the Oval Office. Unlike the Barack Obama figure revealed in 2009, who was depicted smiling, Trump appears resolute and quite serious.

The woman in the image is hairstylist Gemma Sim, who appears to be using hairspray (not spray tan) on the figure.

Other images show the wax replica from other angles: