Was a Photo of Trump in the White House Situation Room Staged?

Critics claimed a picture of President Trump watching a raid in Syria unfold from the White House was actually taken after the fact. 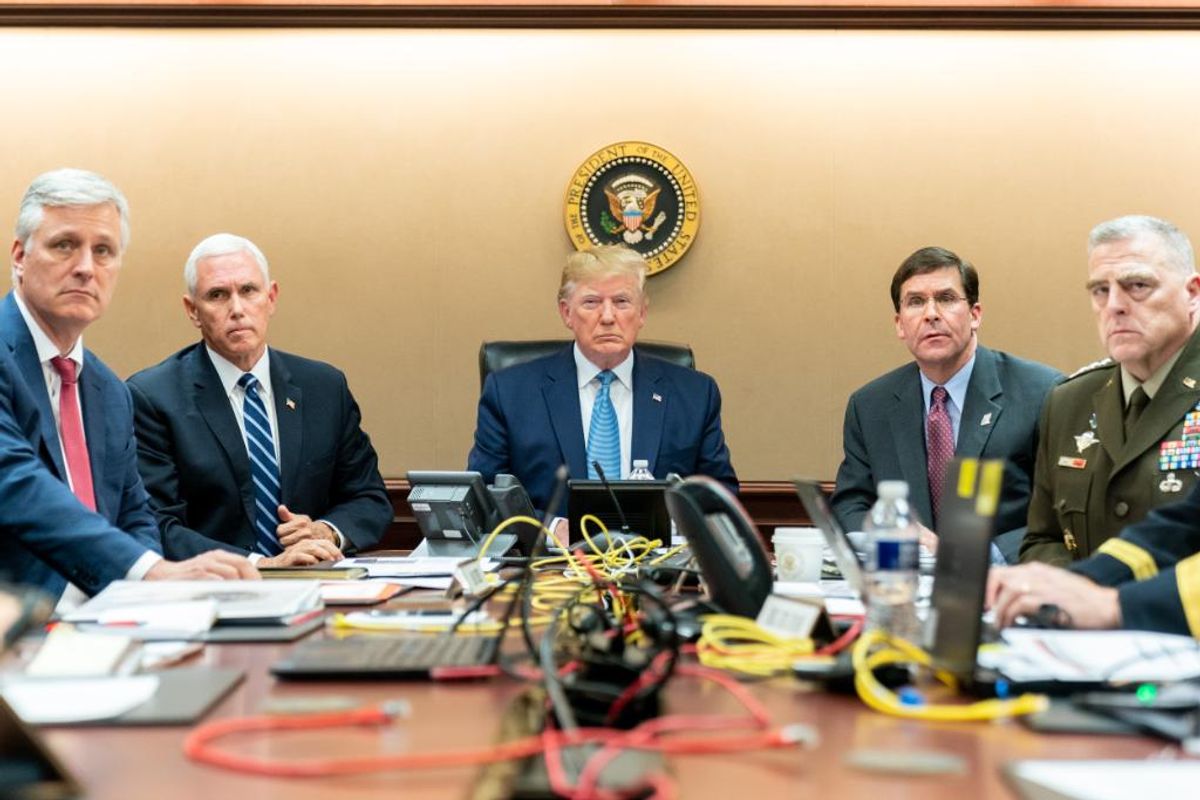 Claim:
A photograph of President Donald Trump in the White House Situation Room during a military raid in Syria was staged after the fact.
Rating:

U.S. President Donald Trump's announcement on the morning of Oct. 27, 2019, that a military operation in Syria had resulted in the death of Islamic State leader Abu Bakr al-Baghdadi prompted many comparisons and contrasts with President Barack Obama's similar announcement several years earlier about the raid in Pakistan that had killed al Qaeda leader Osama bin Laden. In particular, attention focused on photographs taken of the two presidents with members of their national security teams in White House situation rooms while those operations were in progress: As some critics noted, in the former photograph Trump is in the center of the photograph at the head of the table, everyone pictured is dressed neatly in suit and tie, the subjects are all looking into the camera and appear to be emotionally composed, and the table curiously contains a bunch of colorful ethernet cables that don't appear to be connect to anything. By contrast, in the latter photograph Obama is neither in the center of the pictured nor seated at the head of the table, most of the persons present (including Obama, Vice President Joe Biden, and members of Obama's national security team) are lacking suit coats and/or ties, no one pictured is looking at the camera, and the tension felt by those present in the room is palpable.

These differences led some critics to claim that Trump's situation room photograph had been staged, and that (just as had been falsely claimed of Obama several years earlier), Trump had actually been out golfing when the operation got underway. Particularly, Pete Souza, the official White House photographer who snapped the famous situation room photograph of Obama seen above, suggested that timestamps indicated the former photograph to have been taken well after the raid that led to al-Baghdadi's death:

Many online commenters also seized on records and reports supposedly showing that Trump was on a golf outing until just after 3 p.m. on Oct. 26 and didn't arrive at the White House until 4:18 p.m., past the reported time the raid in Syria was taking place: However, Souza later backed off his previous tweet, maintaining that he hadn't said the situation room photograph was staged, and that its timestamp meshed with Trump's broad statement about timing:

Just to be clear, I didn't say it was staged. Trump himself said he didn't arrive to the Situation Room until "around 5pm". So it's definitely possible the photo was taken during the raid. https://t.co/h3yx8BbLAT

Moreover, these claims of a "staged photograph" are based on the premise that the raid in Syria was underway or had concluded by 3:30 p.m. EDT on Oct. 26, which doesn't appear to be the case. New Yorker reporter Ben Taub, for example, noted the first “on-the-ground posts about a helicopter raid in Idlib started surfacing shortly after 11:00 p.m. local time in Syria." As well, a Time/AP news report described "an attack carried out by a squadron of eight helicopters accompanied by a warplane ... in the Barisha area north of Idlib city, after midnight":

This isn't true. First on-the-ground posts about a helicopter raid in Idlib started surfacing shortly after 5PM EST, 11PM in Syria. Yes, the photo looks staged as hell, but this timing controversy is based on a false premise. https://t.co/eIGqv2e8MS

Idlib, Syria, was six hours ahead of Eastern time on the day the raid occurred, so if the operation was indeed unfolding between 11:00 p.m. and midnight in Syria, that would correspond to the interval from 5  p.m. and 6:00 p.m. in Washington, D.C., at a time when the situation room photograph's metadata indicated it was snapped.

We're awaiting more precise information about the timing of various events that day, but the available evidence does not seem to support the notion that Trump was away from the White House during the entirety of the Syria operation, and that the photograph of him with his national security team in the White House Situation Room was therefore taken after its conclusion.

Whether the photograph was "staged" in the sense that its subjects were allegedly posing for the camera rather than being captured naturally and candidly is not something that can be determined from metadata and timing of events.