Did Trump Sign a 'NAFTA Agreement' in the Wrong Place?

A moment from U.S. President Donald Trump's time in the White House resurfaced on Reddit in 2022. 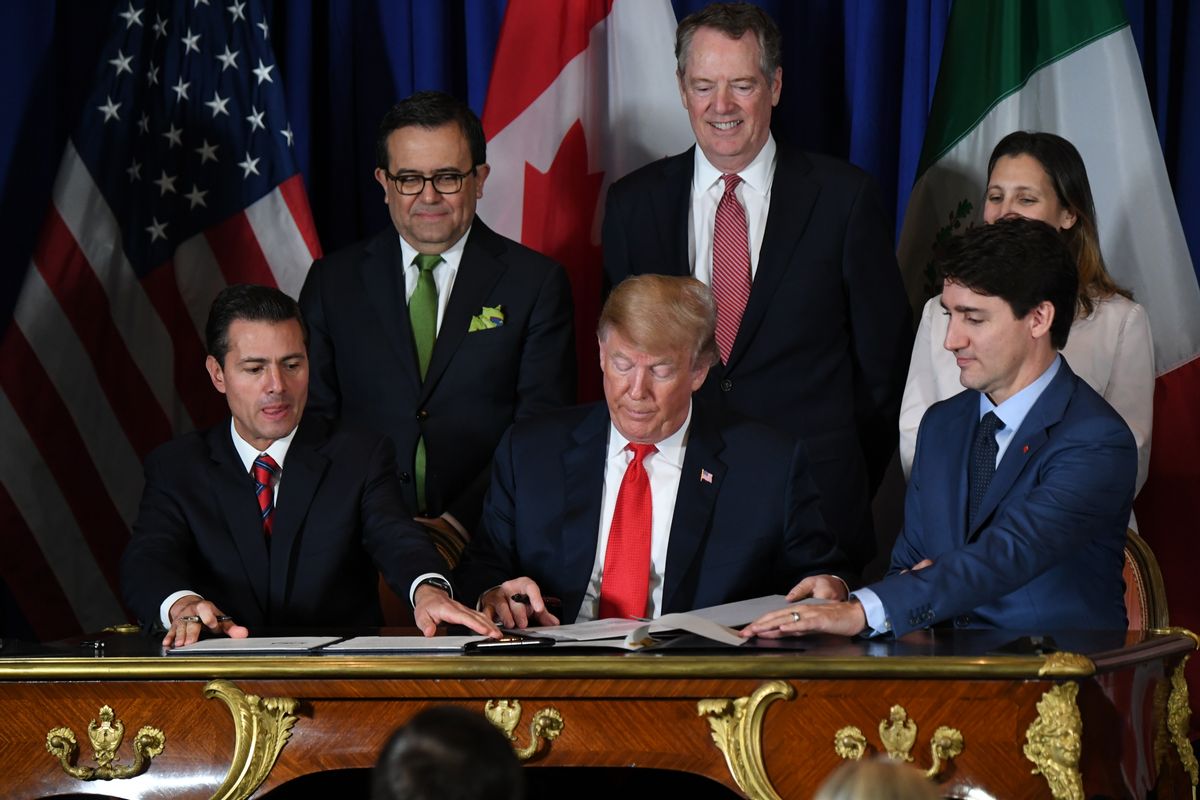 On Feb. 15, 2022, a Reddit post with a 30-second video claimed that it showed U.S. President Donald Trump signing a "NAFTA agreement" wrong by mistake. The caption read: "The look on the faces of world leaders when they realize that Trump signed the NAFTA agreement wrong." The video included shots of Trump, Mexican President Enrique Peña Nieto, Canadian Prime Minister Justin Trudeau, and others. It originally came from a tweet by @MuhammadLila that said Trump "[appeared] to sign in the wrong place" on one of the documents:

According to The Associated Press, the video was recorded on Nov. 30, 2018. On that date, the three world leaders sat down to sign the United States-Mexico-Canada Agreement (USMCA), not the North American Free Trade Agreement (NAFTA) as the Reddit post claimed. (USMCA was replacing NAFTA.)

The signing ceremony took place in Buenos Aires, Argentina, while they were in town for the G-20 Leaders Summit. Placed on the signing table in front of each of the three men were three booklets of documents. Each one had three signature blanks. Trump, Peña Nieto, and Trudeau needed to sign all three booklets. One was confirmed to have been printed in French, meaning that the other two were likely English and Spanish.

At the 0:25 mark in C-SPAN's video of the signing, Trump, Peña Nieto, and Trudeau all signed their names on the left side of the booklet in front of them. This indicated that the signature blanks were not in the same order in all three of the booklets.

Trump signed his name to the agreement with what looked to be a Sharpie marker, which created a little bit of noise with the way it made contact with the paper. Also, Trump's way of signing was slower than the other two men. He took about nine seconds to sign in the video from 0:25 to 0:34. Both of these factors were likely the reason why Peña Nieto and Trudeau glanced in Trump's direction as he finished signing.

After the first signature, the three world leaders exchanged booklets and signed again, this time with Trump signing in the middle blank. As they were trading booklets ahead of the third signature, Trump asked, "Which is the one that matters?" Trudeau slightly laughed and responded, "Each of us get a copy."

At the end of the signing, Trudeau was the only man to not hold up his booklet. This led some to believe he did it to hide the supposed mistake made by Trump. However, as BuzzFeed News reported, it may have been because he was not as enthusiastic about the agreement as the other two men.

BuzzFeed News also previously received word from the White House in 2018 that said Trump signed in the correct spots on the documents. While trusting a source from the government in question might not be the most trustworthy way of finding answers, BuzzFeed News had taken things a step further. They were also "told by a government source in Ottawa that the three leaders' names, and the line where each had to sign, were not all in the same order in the three documents." This would explain Trump's signature being on the left for the first booklet and later in the middle for the other two documents.

Since 2018, no new evidence had come to light that showed that Trump signed one of the "NAFTA agreement" booklets in the wrong place. We were unable to find any close-up pictures of all three booklets and could not definitively confirm that the claim was false. For this reason, we have rated this claim as "Unproven." See our description for this rating here.