Did Donald Trump Call Himself the 'Second Coming of God,' the 'Chosen One' or the 'King of Israel'?

Multiple internet memes and news reports played off comments the 45th president made in a series of statements in August 2019. 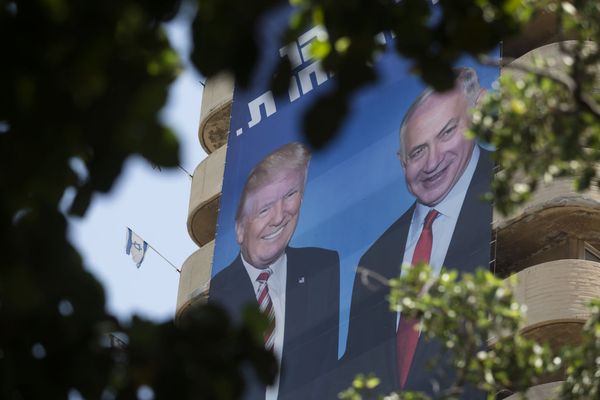 In a brief aside during remarks about the ongoing U.S.-China trade war, Trump said "I am the chosen one."

Trump's "chosen one" aside was likely tongue-in-cheek, not a sincere profession of any belief in his own messianic status. Separately, in a series of tweets, Trump quoted a radio host who claimed Jewish people in Israel admired the U.S. president so greatly that it was as though Trump were the King of Israel or the second coming of Christ. Trump never himself articulated any such belief.

In August 2019, we received inquiries from readers about multiple claims that U.S. President Donald Trump had, in one day, called himself the "second coming of God," the "King of Israel," or "the chosen one."

On Aug. 21, the left-leaning Facebook page Occupy Democrats posted a meme that featured a quotation attributed to Trump: "I'm the King of Israel. I'm the chosen one" along with an unattributed quotation that read: "The Anti-christ will pretend that he is the son of God." (That quotation is not Biblical in origin, and appears to have originated in a famous medieval text about the antichrist, written by the French Benedictine monk Adso of Montier-en-der.)

Promoted the idea that he is "King of Israel."
Retweeted that he's "the second coming of God."
Then said he's "the chosen one."

And in a third post on the same subject, Occupy Democrats published a meme that read: "Trump says he's 'the second coming' and 'the chosen one.' I say we throw him in the sea to see if he can walk on it."

Other mostly left-leaning sources posted similar claims on Twitter, garnering a high volume of retweets. One of them wrote:

"When the president of the United States starts declaring that he is:
- 'The King of Israel'
- 'The Chosen One'
- 'The Second coming of God'

It means he is out of his goddamn mind & it's time for the 25th amendment now."

When the president of the United States starts declaring that he is:

It means he is out of his goddamn mind & it’s time for the #25thAmendmentNow.

Vanity Fair also published an article with the headline "Trump Declares Himself 'King of Israel,' 'the Second Coming of God.'"

The reality was much more complicated, and the claims and reports mentioned above largely misrepresented what Trump actually said or wrote by removing them from their proper context or issuing inaccurate descriptions of them.

While speaking with reporters about the ongoing U.S. trade war with China, Trump did briefly say "I am the chosen one," but it's quite possible, even likely, that he was merely speaking tongue-in-cheek or for rhetorical effect.

His remarks came on Aug. 21, while he was speaking with reporters on the South Lawn of the White House. In response to a question about recent talk of an impending economic recession, linked to the U.S.-China trade war, Trump held forth on what he presented as sharp economic practices by China, a common topic of discussion for the president. He said:

President Trump: "I am the chosen one."

The concept of a "chosen one" — an individual predestined by prophecy to perform the role of a savior or messiah for a particular people — has roots in various cultures and religious traditions, including Christianity, Judaism, and Islam. However, it has evolved beyond those parameters to gain much looser and more secular connotations.

It is a common trope in fiction and literature, especially science fiction and fantasy (think of Harry Potter), and is also frequently invoked, sometimes with tongue in cheek, in the context of sports. For example, the basketball player LeBron James famously had "Chosen 1" tattooed on his back, after Sports Illustrated published a cover story about him, describing the then-phenomenally promising high school junior as "the chosen one."

In theory, Trump could have been seriously declaring a sincere belief that he is destined by prophecy to be the savior of the American people, or indeed the world, when he said as an aside "I am the chosen one," during a discussion with reporters about U.S.-China economic relations. However, it seems much more likely to us, especially in light of his somewhat theatrical glance to the skies, that he was either using the phrase as a figure of speech born out of his apparently rather certain belief in his own talents, or that he was simply speaking with tongue firmly in cheek, or a little bit of both.

If the U.S. president refers to himself as "the chosen one" again, and with less ambiguous, more clearly messianic connotations, we will update this article accordingly.

'The King of Israel' and 'the second coming of God'

Trump never declared or called or described himself as "the King of Israel" or "the second coming of God." Further, he did not even quote someone who personally professed that belief, and the person he did quote was not even claiming that others held that belief. As such, many sources, including those mentioned above, grossly misrepresented the pronouncements made in this episode.

However, in a decision that concerned many observers, the president did directly quote the conspiracy theorist and radio host Wayne Allyn Root as saying that "The Jewish people in Israel love [Trump] like he's the King of Israel" and "like he is the second coming of God." Trump did this in a series of tweets, also on Aug. 21, which he prefaced by writing "Thank you Wayne Allyn Root for the very nice words":

.... like he’s the King of Israel. They love him like he is the second coming of God ... But American Jews don’t know him or like him. They don’t even know what they’re doing or saying anymore. It makes no sense! But that’s OK, if he keeps doing what he’s doing, he’s good for .....

Trump almost entirely accurately quoted remarks Root made on his "Newsmax" TV show on Aug. 20. In response to a caller who lamented the purported irrationality and blind loyalty of Democrat voters, Root held forth on the traditional support for the Democrat party among Jewish voters in the U.S., in contrast with what he presented as widespread support for Trump among Jews in Israel. He said:

The remarks in question can be watched here (beginning at 36:45). Root was echoing similar statements Trump himself made earlier that day. Speaking to reporters at the White House, the president addressed the controversy over Israel's reversed decision to bar U.S. Reps. Rashida Tlaib, D-Mich., and Ilhan Omar, D-Minn., from entering the country.

Trump proclaimed: "Where has the Democratic party gone? Where have they gone where they're defending these two people [Tlaib and Omar] over the state of Israel? And I think any Jewish people that vote for a Democrat, I think it shows a total lack of knowledge or great disloyalty."

(It is a matter for a separate discussion that the second component of Root's simile was woefully theologically illiterate. An important distinction between Christianity and Judaism is that Judaism traditionally rejects the notion of Christ as a messiah, thereby rendering the concept of a second coming inapplicable, and this part of Root's simile nonsensical by definition.)

Root later emphasized the fact that he was engaging in simile, rather than claiming Trump was, in fact, the king of Israel or the second coming of Christ, or even that Israeli Jews regard him as such. During a discussion with former Fox News host Bill O'Reilly on Root's "Newsmax" TV show, Root said:

We know that certain Christians in the United States and beyond have professed a fringe belief in Trump as a Christ-like or messianic figure. It's even possible, theoretically, that Trump himself might harbor similar suspicions of his own destiny. But the series of statements he made on Aug. 21, 2019, did not constitute evidence of any such belief on his part.

The president did say "I am the chosen one," but he made the remark as an aside, combining it with a theatrical glance towards the heavens, while making a broader point about his engaging in a supposedly overdue trade war with China. The context, along with Trump's penchant for flippant and tongue-in-cheek asides, makes it highly unlikely he was choosing that moment to earnestly articulate some sincere belief in his own messianic destiny.

So the widely promulgated claim that Trump, simply by quoting Root's remarks, was in effect declaring himself to be the King of Israel or the second coming of Christ, was inaccurate by a considerable distance. Trump did not even quote someone who professed that belief, and the person he did quote was not even claiming that others held that belief.

Washington, Jesse.  "The Magazine Cover LeBron James Got Tatted On His Back."   The Undefeated.  15 February 2017.