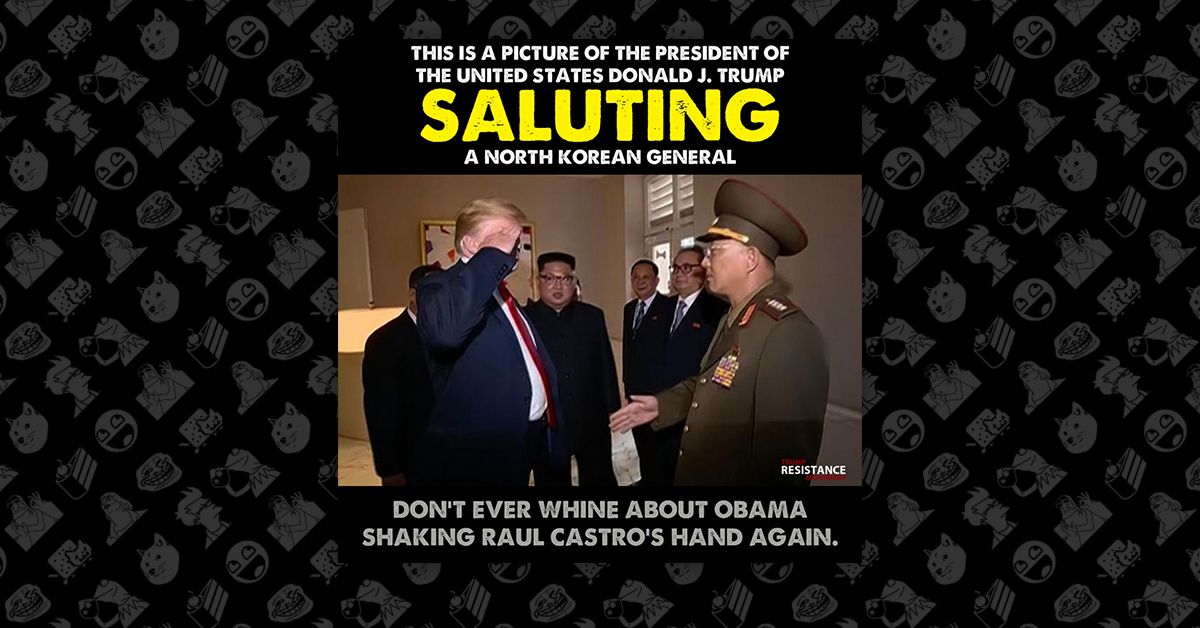 On June 13, 2018, North Korean television aired video footage of the summit meeting in Singapore between former President Donald Trump and Chairman Kim Jong Un, in which Trump is seen saluting a general in the North Korean military.

The footage shows Trump being introduced to a line of North Korean dignitaries. When he reaches out to shake the unidentified general's hand, the latter quickly withdraws his hand and responds instead with a military salute. Trump respectfully salutes in return.

The awkward exchange wasn't captured by Western media sources, but can be seen in a clip tweeted by the BBC:

The footage was part of a 42-minute propaganda video by Korean Central Television touting Kim's "supernormal political acumen" at what it termed "the meeting of the century." Trump's salute takes place just after the 23-and-a-half-minute mark (and he appears to return a salute from the same military officer again again 36 minutes into the video):

Controversy ensued, of course — just as it did when President Barack Obama bowed while greeting King Abdullah of Saudi Arabia and, later, Emperor Akihito of Japan in 2009. In the first case, critics accused Obama of showing obeisance to a foreign ruler and Islam. In the second, they called his behavior "treasonous."

Critics of Trump's behavior in Singapore noted that despite the friendly tone of the summit, North Korea is still an "adversarial" nation ruled by an authoritarian regime with a long history of egregious human rights violations.

In a statement issued after the release of the North Korea video, retired U.S. Army Major General Paul D. Eaton called Trump's behavior "wholly inappropriate," saying that "It is wholly inappropriate for the commander in chief of our armed forces to salute the military of our adversary... We must talk with them, for the sake of avoiding a disastrous war. But they have not earned the salute of a president."

But even as partisan critics hauled out stronger epithets like "traitor" and "treasonous" to describe Trump's actions, White House Press Secretary Sarah Sanders defended the salute as "a common courtesy":

Similarly, Rep. Darrell Issa (R-California) told CNN, "Returning a salute is not the same as saluting someone. You always return a salute given to you." And Trump himself dismissed the significance of the salute during an impromptu interview on the Fox News Channel's Fox & Friends, saying, "I met a general. He saluted me and I saluted him back."

As in the case of Obama's bowing to foreign royalty, there appears to be no basis in law or protocol for claiming that Trump's actions were illegal or a breach of presidential etiquette. U.S. military protocol holds that it is "customary to salute officers of friendly foreign nations when recognized as such." While saluting officers of unfriendly foreign nations isn't explicitly forbidden, we can assume it is frowned upon — although in any case these protocols don't apply to the commander-in-chief, who, despite exercising ultimate authority over the U.S. military, is by law a civilian officer with no military rank or standing.