Donald Trump retweeted a purported photograph of black supporters of his campaign, but the depicted people weren't Trump fans. 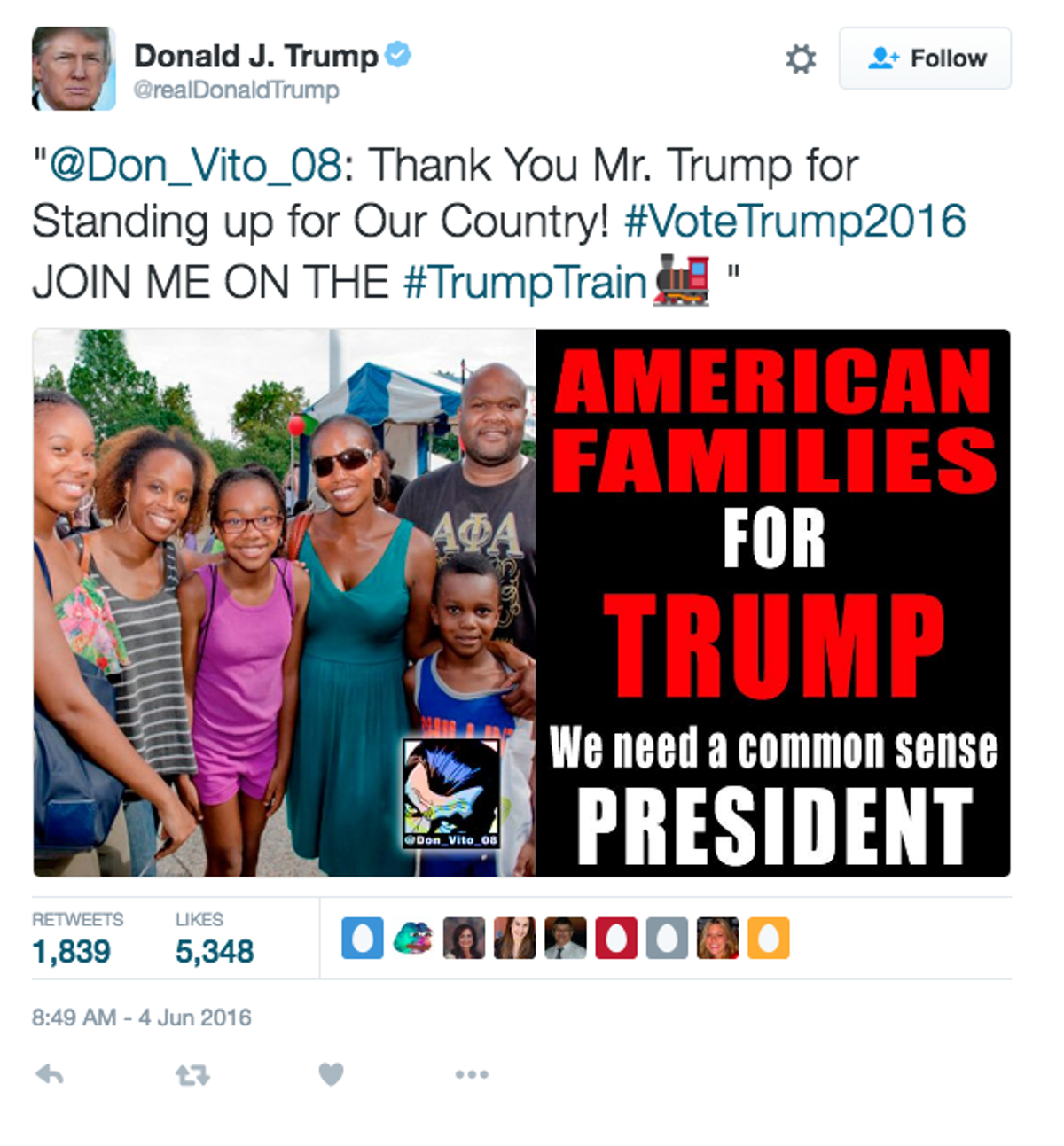 Claim:
Donald Trump retweeted a purported photograph of black supporters of his campaign, even though the depicted people aren't Trump fans.
Rating:

On 4 June 2016, Republican presidential candidate Donald Trump retweeted a tweet that included a photograph purportedly showing some black supporters of his campaign:

"@Don_Vito_08: Thank You Mr. Trump for Standing up for Our Country! #VoteTrump2016 JOIN ME ON THE #TrumpTrainhttps://t.co/zgopGvSEen"

One day earlier, Trump had been mocked in the media for referring to a lone black political rally attendee as "my African-American over here." Trump didn't directly state that the retweet was made in response to the controversy over his rally comment, but many social media users inferred that it was.

The original tweet that Trump retweeted was subsequently deleted, but Trump's tweet remained undeleted in his Twitter timeline as of 6 June 2016. Screen captures of the original retweet depicted a photograph that suggested the individuals pictured therein were Trump supporters:

Not long after Trump's retweet appeared online, other users questioned the assertion that the black people in the photograph were indeed supporters of his campaign. In under half an hour, fellow Twitterers pointed out that the image in the retweet had originated with a news article unrelated to Trump or the presidential election:

BuzzFeed reported that the image was among the first results returned in a Google search for "black family," and that the photograph was captured at the Midwest Black Family Reunion of August 2015. They identified the people pictured in the photograph as the Perry family (and friends), and quoted Eddie Perry's comments on the Trump controversy:

[A] friend texted [Eddie] a screenshot of Trump’s tweet. “When I saw it, I immediately knew it was political propaganda,” he said.

The other people in the picture are friends of the family, Perry said ... Eddie Perry said the picture of his family that Trump shared was “misleading” and “taken out of context.”

“I’m not saying there aren’t black families who endorse Trump,” he said, “however, this black family didn’t endorse anyone.”