Did Trump Retweet a Cartoon of a Train Hitting a CNN Reporter?

President Trump retweeted, then quickly deleted, a cartoon of a train hitting a CNN reporter, leaving some to wonder if the posting was real. 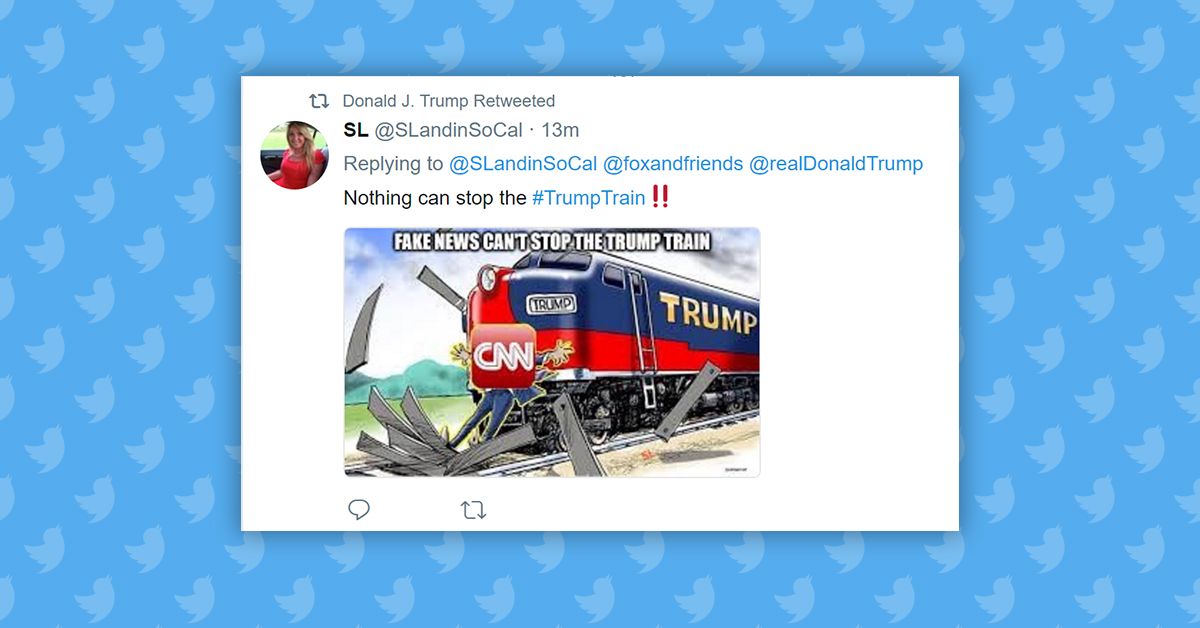 On 15 August 2017, President Trump retweeted a cartoon depiction of a train running over a CNN reporter. He then quickly deleted the post, leaving some people skeptical that it had really happened.

In addition to various credible news reports documenting the retweet, it was archived on Archive.is and the Internet Archive Wayback Machine. Here's a screenshot of the tweet as it appeared on Trump's timeline: Trump's retweet came just three days after Heather Heyer was killed when a white supremacist plowed a car into a group of protesters at a rally in Charlottesville, Virginia. A day before the retweet, Trump had once again accused CNN of being "fake news" (which it is not).

Although Trump certainly retweeted this image, the original poster, Twitter user @SLandinSoCal, quibbled with the media's reporting, arguing that the train wasn't actually "running over" the reporter:

MSM depicted my meme as showing the TrumpTrain "running over" a reporter.#FakeNews‼️ The reporter is trying to stop it- feet popping ties. pic.twitter.com/iiSPCzzWQI

The original comic was created by Cartoonist Gary Varvel and featured a Democrat Donkey attempting to stop the Trump Train. It was originally published by The Indy Star where it was shared with the following description: Democrats are having a hard time stopping the momentum of the incoming Donald J. Trump's administration.

Trump did not explain why he posted or subsequently deleted this image, but Politico reported that it wasn't the only social media gaffe Trump made on the morning of 15 August 2017. The President also retweeted (and quickly deleted) a message calling him a fascist: