Does Trump's Residency Change Mean He Committed Voter Fraud in 2018 or 2020?

In most states, the law provides for a broad interpretation of "residency" when it comes to elections. 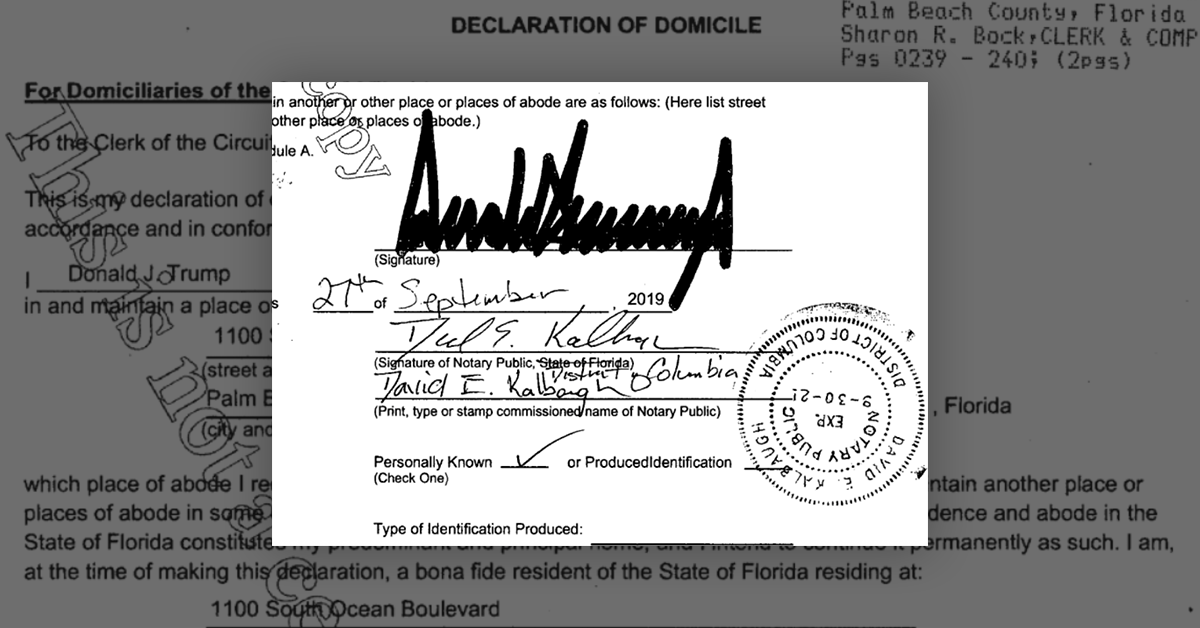 Claim:
Because U.S. President Donald Trump changed his legal residence to Mar-a-Lago in 2018, he committed voter fraud in either the 2018 midterm election, the 2020 presidential election, or both.
Rating:

On Sep. 27, 2018, U.S. President Donald Trump signed papers officially declaring Mar-a-Lago — a private club in Palm Beach, Florida, that he owns — to be his "domicile," or official legal residence.

"A couple of weeks'' ahead of the Nov. 6, 2018 election, according to former White House spokesperson Hogan Gidley, Trump voted absentee as a New Yorker, using the Trump Tower address that had been his primary residence since 1983 as his registered address. In the 2020 election, Trump voted early and in person as a resident of Palm Beach using his Mar-A-Lago address, despite the fact that Mar-a-Lago is a business and that a 1993 contract Trump signed stipulated that the property could not be considered a residence.

Both claims lack merit. Trump's voting behavior in both 2018 and 2020 was legal under both state and federal election law.

Despite changing his official residence prior to the 2018 midterm election, Trump met all of New York State's residency requirements to be a voter there. New York election law explicitly allows a person with multiple residences to pick one for voting purposes. Further, New York state law explicitly indicates that a voter's registration address does not have to be that person's declared "domicile." The New York Board of Elections allows for a broad interpretation of New York residency, and factors determining residency can include, in part, "business pursuits,  and "sites of personal and real property owned by the applicant." For these reasons, and because he did not vote in any other jurisdiction in 2018, Trump did not commit voter fraud, despite changing his domicile from New York to Florida prior to voting.

Also, despite the fact that Trump is in a legal fight with his Florida neighbors and local government over his residency there, Trump broke no Florida election law by voting from that address. It is true that Trump in the early 1990s he signed a contract that re-zoned Mar-a-Lago as a business and stipulated that the property could not be used as a single family home. However, though Trump may be violating local zoning laws, Florida, like New York, allows for broad interpretation of residency. The Florida elections handbook explicitly states (emphasis ours) that "a business address is not typically a satisfactory legal residential address but if the person resides there despite the zoning ordinance, the address could become the person’s legal residential address." Trump regularly resides there and has indicated he plans to continue to do so in spite of any zoning ordinance issue. For that reason, and because he did not vote in any other jurisdiction in 2020, Trump did not commit voter fraud when he voted using his Mar-a-Lago address in 2020.

Because both claims lack merit, we rank the claim that Trump's residency change resulted in violations of election law as "False."