No, Donald Trump didn't say he would rename "New Mexico" in his first act as President. 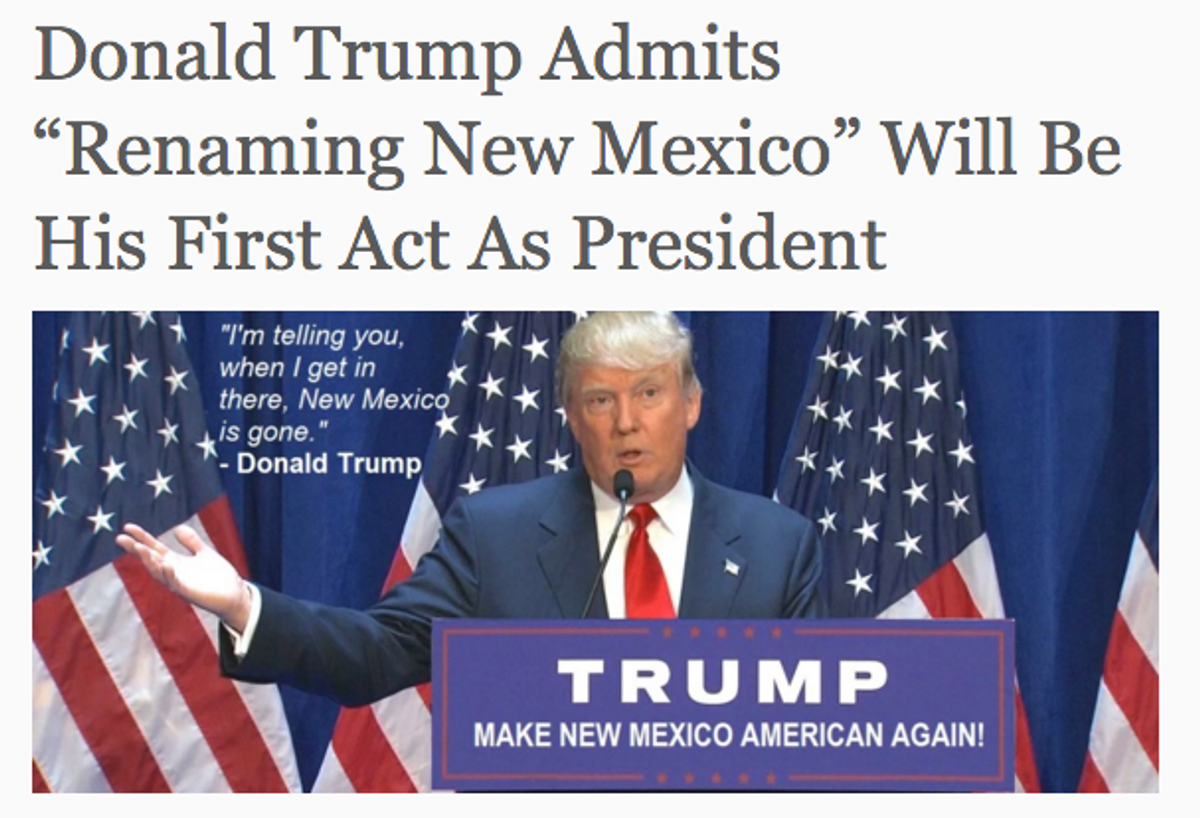 On 22 February 2016, the web site FM News published an article reporting that should Donald Trump become President of the United States, his first priority would be renaming New Mexico:

The Republican frontrunner Donald Trump, has confessed to a room full of university students in Georgia, that his “very first act” as President will be renaming New Mexico. The revelation came during a Q&A at Valdosta State University, where Trump was campaigning.

Eyewitnesses say that around the midpoint of the forum, a first year psychology student began a question directed at Trump, by identifying herself as New Mexican. The U.S. presidential candidate immediately rolled his eyes and interrupted the young woman. “Oh we’re definitely changing that,” he said. “No please, continue. But when I get in there, New Mexico is gone.”

When asked to elaborate by the moderator, Trump opened up, revealing what his “first act” as President of the United States “will” be. “I mean come on, New Mexico? Are they really serious? My first day in office, I’m changing that name so fast, it’ll blow their sombreros straight off.”

The 19 year old student looked stunned, and asked why Trump would want to rename her home state. “Listen sweetie, I’m here to make America great again, not Mexico. Alright?” the billionaire responded sarcastically. “They’ve got a real problem in that state with illegals, drugs and crime, and don’t even get me started on the rapists.”

The image at the top of the article depicted Trump announcing his bid to run for president in June 2015, and wasn't taken during an appearance at Valdosta State University in 2016. A rally for Trump was planned for that venue, but not until 29 February 2016.

The name FM News was generic enough to be mistaken for a legitimate news outlet by some readers, but the domain (failmuch.com) hinted at the web site's purpose. On an "About" page, FM News stated it was one of many fake news pages:

Fail Much News was founded in 2015 and is a satire, parody and spoof news site. All articles are fictitious and occasionally intended to be humourous. Please feel free to copy and paste this into your comments to prove this site is “bullshit”.