U.S. President Donald Trump touted the “antibody cocktail” as a COVID-19 “cure” that he intended to make available to the American public. 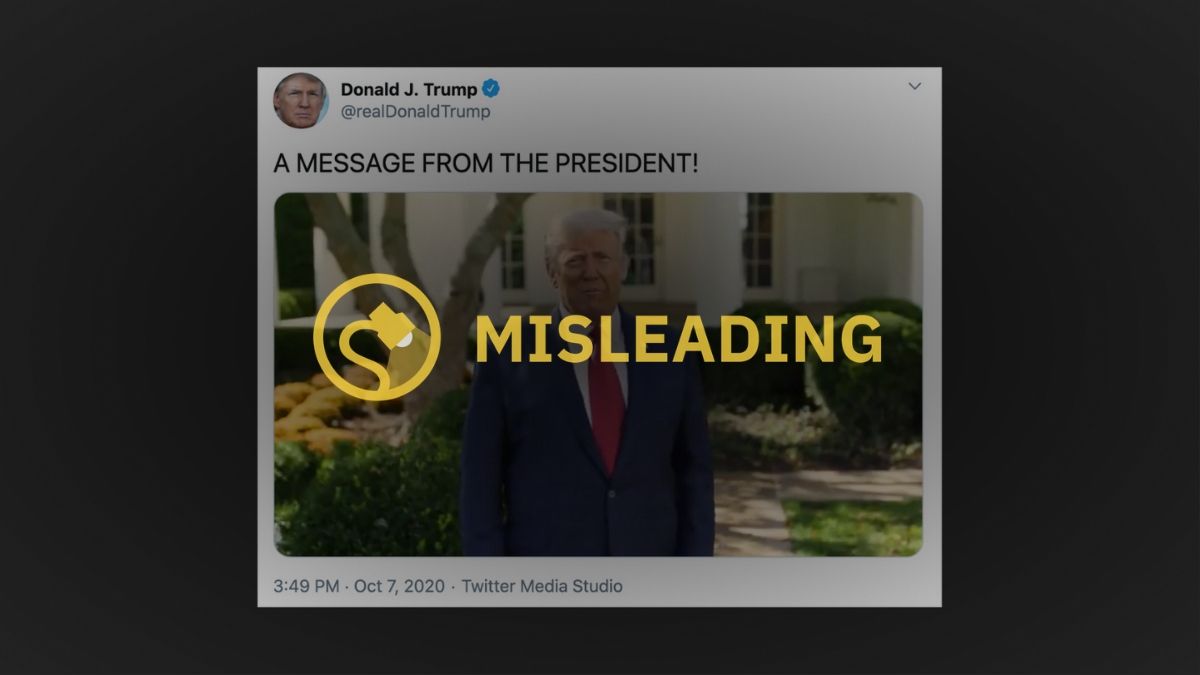 Claim:
The development of REGN-COV2, the experimental “anti-viral antibody cocktail” given to U.S. President Donald Trump to treat COVID-19, involved the use of human fetal tissues and embryonic stem cells.
Rating:

The manufacturer of REGN-COV2 has stated that it employs stem cells in its research, most commonly mouse embryonic stem cells and human blood stem cells. The "antibody cocktail" given to Trump is a combination of two human-made proteins and was developed using a decades-old cell line derived from embryonic kidney tissues obtained from an aborted human fetus in 1973.

However, no human embryonic stem cells or recently harvested fetal tissues were used in the development of REGN-COV2, according to the manufacturer.

As the world raced to find a treatment that would alleviate the global pressure of the coronavirus pandemic, U.S. President Donald Trump contracted the virus in early October 2020 and developed COVID-19, the respiratory disease caused by SARS-CoV-2. In the days following his diagnosis and public release from Walter Reed Hospital, where he received world-class treatment, Trump touted the powers of a “miracle drug” called Regeneron, which he promised to make available to the American people.

A video shared in tweet by the president on Oct. 7 claimed that Regeneron was a “cure.”

“I spent four days there [at Walter Reed] and I went in, I wasn’t feeling so hot. And within a very short period of time, they gave me Regeneron. It’s called Regeneron. And other things too but I think this was the key. But they gave me Regeneron, and it was like, unbelievable. I felt good immediately. I felt as good three days ago as I do now.

Shortly after the president praised what he deemed a “cure” for his COVID-19 infection, some social media users pushed the claim that the drug Trump was given was “developed using fetal tissue” — a practice in direct conflict with the administration’s pro-life platform. To clarify, Trump was treated with REGN-COV2, a “novel anti-viral antibody cocktail” created by Regeneron Pharmaceuticals, a New York-based company that has openly stated it uses stem cell and fetal tissues as part of its research and development on new pharmaceutical treatments. This knowledge, and open support from a pro-life president, incited social media pushback from users who argued that the company’s use of stem cells and fetal tissues for scientific research goes against pro-life platforms and policies.

REGN-COV2 is a combination of two human-made proteins, or monoclonal antibodies, known as REGN10933 and REGN10987. These two monoclonal antibodies were specifically designed to block the ability of SARs-CoV-2 to infect human cells. The biotechnology company further went on to describe the development of REGN-COV2 as follows:

To develop REGN-COV2, Regeneron scientists evaluated thousands of fully-human antibodies produced by the company's VelocImmune® mice, which have been genetically modified to have a human immune system, as well as antibodies identified from humans who have recovered from COVID-19. The two potent, virus-neutralizing antibodies that form REGN-COV2 bind non-competitively to the critical receptor binding domain of the virus's spike protein, which diminishes the ability of mutant viruses to escape treatment and protects against spike variants that have arisen in the human population.

While it is true that Regeneron has used stem cells for some of its research, no human stem cells or human embryonic stem cells were used in the development of REGN-COV2, according to Alexandria Bowie, a spokesperson for the company. An April 2020 statement issued by Regeneron confirmed that research using stem cells helps its scientists model complex diseases, test new drug candidates, and lead to scientific insights that may help spur the creation of new medicines — but the company contends that embryonic cells were not used in the production of REGN-CO2.

“In short: we did not use human stem cells or human embryonic stem cells in the development of REGN-COV2,” Bowie told Snopes in an email.

But it’s not quite that cut and dried.

In the research and development of pharmaceutical therapeutics, many companies turn to what is known as a cell line. These are cultures of human or animal cells that are derived from a living organism and cultured and propagated repeatedly, and, in some cases, used indefinitely. The development of REGN-COV2 utilized HEK293T — a cell line that is derived from human fetal embryonic kidney tissues — to create a “pseudovirus” that mimics a spike Protein found in SARS-CoV-2 in order to test the drug’s ability to neutralize — and ultimately treat — the novel coronavirus.

“HEK293s are considered ‘immortalized’ cells (not stem cells) and are a common and widespread tool in research labs. This cell line was originally derived by adenovirus transformation of human embryonic kidney cells in 1977,” explained Bowie, adding that HEK293 were further transformed at Stanford in the 1980s with SV40 large T antigen, a solution that is used by researchers to initiate and maintain DNA replication necessary for creating cell lines.

Fetal tissues were not directly used in the development of REGN-COV2, but cell lines from decades-old embryonic kidney tissues were. Fetal tissues are used to develop cell lines. Embryonic stem cells, on the other hand, are different than adult stem cells in that they are undifferentiated and regenerative cells, which means that they have not been assigned a key task in the human body. As such, researchers have uncovered ways to direct their use in creating human tissues that allow for a variety of uses, including testing new pharmaceuticals.

Opposition to the use of fetal tissue and embryonic stem cell research has been at the heart of the pro-life platform due to the way in which these cells are obtained and its association with using living fetuses either inside (in utero) or outside of the uterus (ex utero). Pro-life groups like March for Life have even gone so far as to pressure the Trump administration to halt “funding for research that requires aborted fetal organs and tissues.” In summer 2019, the president required any federally funded research using fetal tissue to undergo an ethics review, and has since stocked his cabinet with other similarly-minded officials.

REGN-COV2 is currently in late-stage clinical trials for various populations, including non-hospitalized and hospitalized patients as well as for the potential prevention in individuals who may have had close household exposure to COVID-19. According to a news release published on Sept. 29, the company announced that the antibody cocktail was shown to reduce the viral load and alleviate symptoms in non-hospitalized patients with COVID-19. REGN-COV2 also showed positive trends in reducing medical visits. However, it is important to note that the research included a relatively small sample size of just 275 patients.

“The greatest treatment benefit was in patients who had not mounted their own effective immune response, suggesting that REGN-COV2 could provide a therapeutic substitute for the naturally-occurring immune response. These patients were less likely to clear the virus on their own and were at greater risk for prolonged symptoms,” said Regeneron President and Chief Scientific Officer Dr. George D. Yancopoulos in a statement.

Regeneron told Snopes that it “can’t speculate on potential timing for an EUA.” We will update when such is available.

Naftulin, Julia.   "Antiabortion Groups Say They Stand Behind Trump’s Use of a Drug Tested on Cells Derived from an Aborted Fetus Because the President Was ‘Not Involved with that Abortion.’"     Business Insider.   9 Oct. 2020.