Were Omaha Trump Rally Attendees Stranded in the Cold?

Snarled traffic caused delays in getting buses to rallygoers, leaving some temporarily stranded. 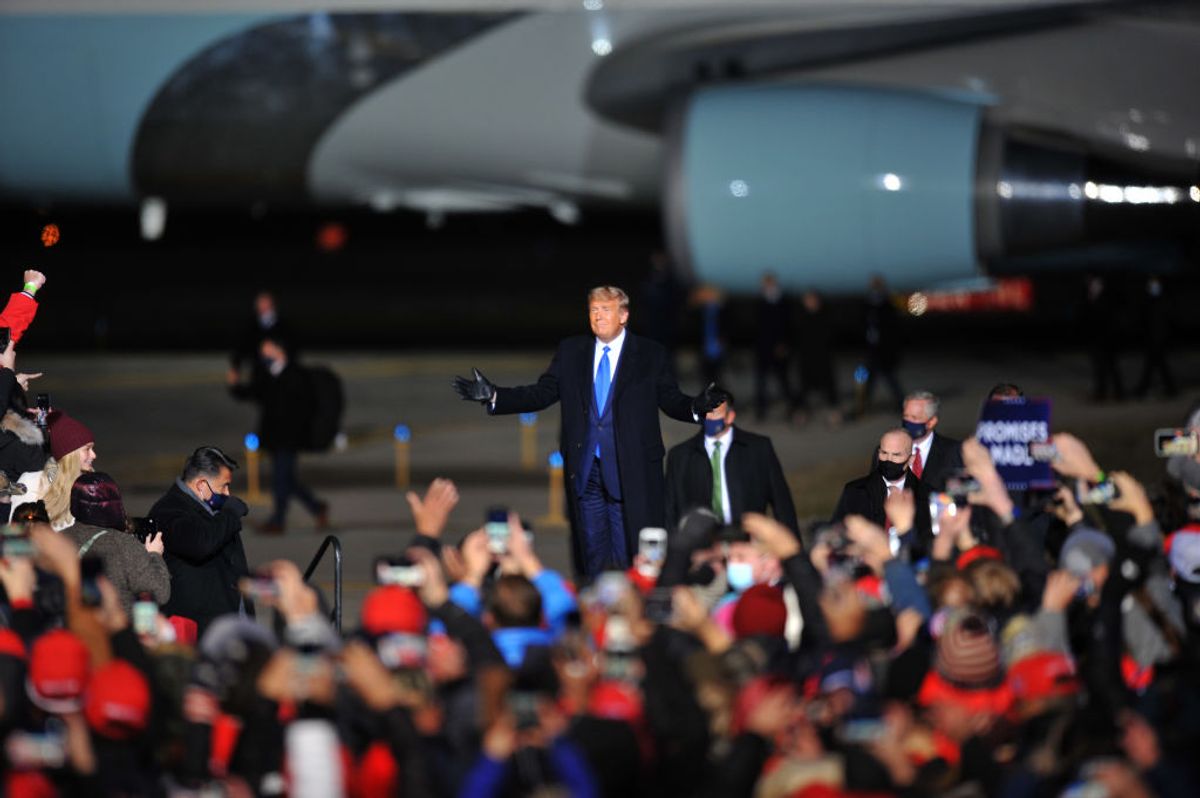 Claim:
Some attendees at U.S. President Donald Trump's October 2020 campaign rally in Nebraska were temporarily stranded in the cold after the event.
Rating:

A campaign rally for U.S. President Donald Trump in Omaha, Nebraska, drew thousands of attendees, and hundreds were stranded in freezing temperatures after the event waiting for transport back to their parked cars miles away, according to Omaha police and news reports.

Viral news stories and social media posts about the incident prompted readers to ask Snopes whether it's true that rally attendees were left stranded in the cold well after the president had departed, and whether some of them were then treated for cold exposure.

It is true. The Trump campaign blamed a larger-than-expected crowd and snarled traffic due to local road closures for the delays.

"Because of the sheer size of the crowd, we deployed 40 shuttle buses – double the normal allotment – but local road closures and resulting congestion caused delays," Trump campaign spokeswoman Samantha Zager said in an emailed statement. "At the guest departure location, we had tents, heaters, generators, hot cocoa, and handwarmers available for guests."

We sent Zager a follow-up question asking where the guest departure location was, and what its maximum capacity was. We will update if we receive a response.

Omaha Police spokesman Michael Pecha told Snopes in an email that the 40 buses began running rallygoers to the event site at 10 a.m. up until the start of the event at 8 p.m. An estimated 25,000 people attended the rally at Eppley Airfield, northeast of downtown Omaha.

Once Trump's speech ended at about 9 p.m., the crowd of 25,000 rally attendees, which had amassed over the course of 10 hours, "flooded to the waiting buses," Pecha said.

"Law enforcement made buses a priority on the event outbound. Additional buses were called in from Metro Area Transit to assist with the outbound to get people back to their cars," Pecha stated.

Omaha police made no mention of road closures. Instead, Pecha said that a large number of attendees decided to try and walk back to their cars — all of which were parked a minimum of 2.5 miles away from the rally location.

"The foot traffic on Lindberg Drive [a road leading to Eppley Airfield] slowed bus traffic and delayed bus trips considerably," Pecha stated. "There was an abundance of uniformed officers in marked cars and on foot attempting to direct traffic to clear the congestion."

The Omaha World-Herald reported that each charter bus carried 54 passengers and that the snarled traffic delayed empty buses from returning to the pickup point to load more passengers. At about 10 p.m., police called Omaha Metro Transit buses for help because "about 500 people were unable to walk from the rally site to their vehicles," a transit spokesperson told the newspaper.

Many people, Pecha said, had underestimated the distance between their cars and the rally site. Police assisted in giving the elderly and infirm rides to their cars.

Pecha said that according to preliminary reports from that night, 30 people were contacted by emergency personnel for medical reasons and seven were transported to hospitals "with a variety of medical conditions" through the duration of the rally and after. News reports indicated that temperature, with wind chill, dipped into the 20s.

Journalists who witnessed the events and emergency scanner traffic indicated that some of those assisted by emergency responders were suffering from the effects of cold exposure in the event's aftermath.

Pecha said the last rally attendee was loaded onto a bus at 11:50 p.m. — almost three hours after the event ended.

The chaos predictably drew criticism from Trump's political opponent, Democratic presidential nominee Joe Biden, who said that Trump "gets his photo op and then he gets out. He leaves everyone else to suffer the consequence of his failure to make a responsible plan."

Trump had already been facing criticism for holding packed campaign rallies in the midst of the ongoing COVID-19 pandemic. Nebraska, meanwhile, is experiencing a surge in coronavirus hospitalizations.