Did Trump Say Cops Should 'Rough People Up' During Arrests?

Comments the president made in 2017 resurfaced in May 2020 in the wake of the killing of George Floyd, a black man who died after a Minneapolis police officer kneeled on his neck. 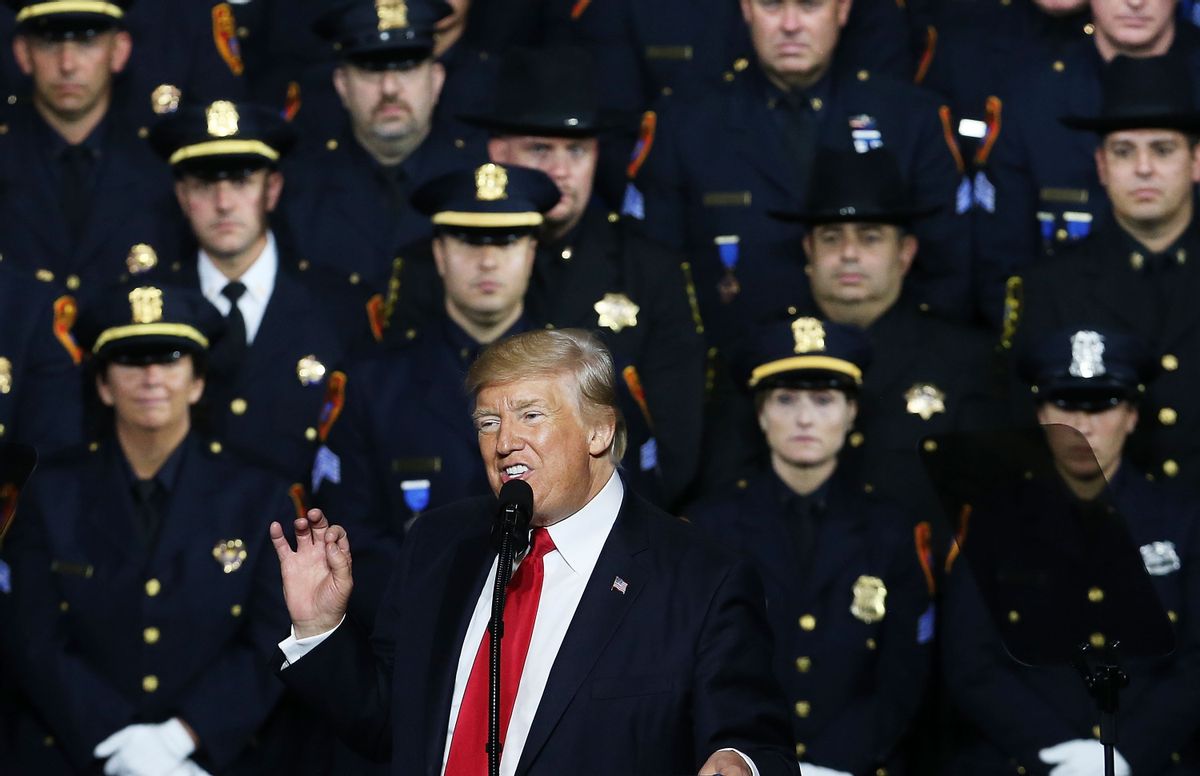 Claim:
In July 2017, U.S. President Donald Trump said police officers should "rough people up more" and not to worry about injuring suspects during arrests, effectively endorsing use of excessive force by cops.
Rating:

While addressing a crowd of law enforcement officers in July 2017, Trump did advise police not to be "too nice" with people in custody and encouraged officers to stop protecting peoples' heads when they're handcuffed and ducking to get into squad cars.

Trump did not explicitly say police should "rough people up" during arrests or to not worry about injuring suspects during arrests. But the president did use the word "rough" several times to describe what he envisions as an ideal law enforcement officer or detainment. Although his comments did not align with local and federal policies that aim to limit the use of excessive force by police and essentially encouraged cops to infringe on citizens' legal rights, the president did not directly give officers the green light to injure civilians.

In May 2020, as many Americans protested the killing of George Floyd — a black man who died in Minneapolis after a white police officer knelt on his neck while Floyd pleaded to breathe — Twitter users claimed U.S. President Donald Trump helped motivate the officer's use of excessive force, simultaneously suggesting that the commander-in-chief supported the events that led to Floyd’s death.

Among those who claimed the connection between Floyd’s death and Trump’s rhetoric was Frank Figliuzzi, former assistant FBI director for counterintelligence and NBC News analyst, who tweeted on May 26, 2020: "When assessing the Minneapolis police misconduct and current culture remember this from 2017: Trump tells cops they should rough people up more during arrests."

His tweet included a link to a Vox story with a headline echoing his claim, a story that highlighted remarks by Trump on July 28, 2017, in front of a crowd of U.S. Immigration and Customs Enforcement (ICE) agents, police officers, and sheriff’s deputies at a Long Island community college in Suffolk County. Other tweets shared a Washington Post story about the same 2017 Trump event with the headline: "Trump tells police not to worry about injuring suspects during arrests." For the purpose of this examination, we’ll focus on what appears to be the crux of the tweets' claims in May 2020: that Trump about three years earlier encouraged U.S. law enforcement officers to "rough people up more" and not to worry about injuring suspects during arrests — essentially endorsing the use of excessive force by cops no matter the circumstances — despite local and federal policies that aim to protect civilians' legal rights and curb police misconduct.

First, we reviewed the source of the claim: Trump's remarks at the July 2017 event. At some point in the years between the 2017 speech and this report, the White House removed a copy of the speech transcript from the public archives where official addresses by the president are published.

CSPAN footage of the July 2017 event, though, shows that the president spent most of his roughly 34-minute address emphasizing his administration’s appreciation for law enforcement, calls to tighten the country’s borders, and intolerance for U.S. gang violence, specifically among members of the Los Angeles-based Mara Salvatrucha, or MS-13, gang. Of ICE agents combating such crimes, Trump said: "They're rough. I don't want to be — say it because they’ll say that's not politically correct. You're not allowed to have rough people doing this kind of work."

The crowd responded to that comment and several others by the president with laughter and applause. Then, about 10 minutes later, Trump called on Congress to set aside more federal funding for ICE to dissolve the notorious gang and "root out the criminal cartels from our country," adding:

Now, we're getting them out anyway, but we'd like to get them out a lot faster. And when you see these towns and when you see these thugs being thrown into the back of a paddy wagon — you just see them thrown in, rough — I said, please don’t be too nice. (Laughter.) Like when you guys put somebody in the car and you're protecting their head, you know, the way you put their hand over? Like, don’t hit their head and they've just killed somebody — don't hit their head. I said, you can take the hand away, okay?

In other words, the president did advise law enforcement officers not to be "too nice" with people in custody, without going into specifics on what that means or defining what level of "nice" cops should be while doing their jobs. He also encouraged officers to stop doing one procedure that aims to prevent injuries to civilians: the practice of protecting peoples' heads when they're handcuffed and ducking to get into squad cars.

Yet it is important to point out a distinction between that comment and the claim: The president did not give officers the green light to injure people no matter the circumstances. Rather, he suggested that authorities should stop specific precautionary measures that could prevent civilians from suffering injuries. It's the difference between police intentionally shoving someone's head onto the roof of a squad car or instead guiding them into the vehicle in a way that could cause injury.

Additionally, Trump did not explicitly say police should "rough people up more" during arrests, even though he did use the word "rough" several times in the speech to suggest what he envisions as an ideal law enforcement officer or detainment.

After the remark, amid applause and cheers from the crowd, Trump turned around to address the first row of law enforcement officers behind him at the podium — some of whom were smiling.

The comments were controversial at the time, not just after Floyd’s death in 2020. Civil and human rights activists immediately condemned their interpretation of the president’s remarks and the nonchalant way in which he described a scenario that could result in suspect injuries in police custody. Vanita Gupta, president of the Leadership Conference on Civil and Human Rights, said in a statement:

The President of the United States, standing before an audience of law enforcement officials, actively encouraged police violence. His remarks undermine the positive efforts of local law enforcement agencies and communities around the country working to address police misconduct and build community-police trust.

That backlash in 2017 also included criticism from U.S. police leaders and organizations that represent them. The chief of the Houston Police Department, for example, tweeted: "To be clear, inappropriate attempt at gallows humor does not reflect values of respect & commitment to constitutional policing of the profession."

To conclude our examination, we looked at existing federal statutes and case law that aim to protect the civil rights of all Americans in police custody, no matter what crime police think they committed, and that aim to prevent cops from using "more force than is reasonably necessary to arrest or gain control of the victim," as the U.S. Department of Justice says on its website. If Trump had told police to "rough people up more" during arrests, like the claim asserts, without explaining under what circumstances he would like that type of excessive force used, he would have essentially been encouraging law-enforcement to break the federal law in cases where force wasn't "reasonably necessary."

In sum, while Trump did say in July 2017 that he would like to see "thugs being thrown into the back of a paddy wagon" and for officers not to "be too nice" with people in custody, and while he encouraged police to stop one procedure that aims to prevent injuries to civilians, we rate this claim as "Mixture." He did not explicitly tell police to "rough people up more" or to not worry about injuring suspects during arrests, though his comments could be interpreted as support for measures that could result in civilian injuries in police custody.