A viral string of tweets got some facts right about a failed business venture involving a Trump company, but it also left out some important context. 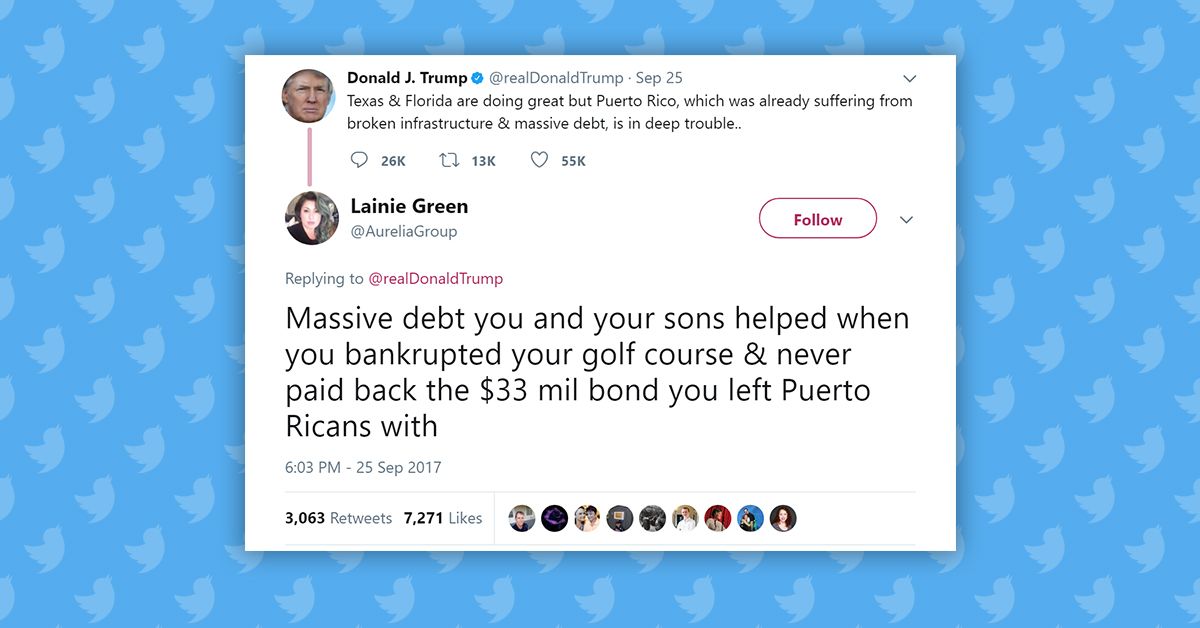 Claim:
Donald Trump "bankrupted" a golf course in Puerto Rico, leaving taxpayers there on the hook for $33 million worth of debt.
Rating:

A Trump company was unable to save a floundering Puerto Rico golf club and resort from bankruptcy after entering into a management and brand licensing agreement with its owners in 2008. As a result of the episode, $32.6 million in government investment was not recouped.

Puerto Rico had been hard hit by a recession, and the club had taken on substantial debt and was suffering annual losses for years before Trump's company intervened.

In the aftermath of a series of hurricanes in September 2017 — particularly Maria, which devastated the United States territory of Puerto Rico — President Donald Trump reflected on the infrastructural damage caused by those storms in a 25 September 2017 tweet:

Texas & Florida are doing great but Puerto Rico, which was already suffering from broken infrastructure & massive debt, is in deep trouble..

In response, public relations and marketing executive Lainie Green issued a series of tweets that went viral, accusing President Trump of having added to Puerto Rico's debt by bankrupting a golf course there and defaulting on $33 million worth of government-issued bonds:

So how much are you going to give back of that $600,000 paycheck you got for sticking Puerto Rico with a $33 million debt?

Green's account of the episode got some facts right, but it also left out some important context necessary for any assessment of Trump's responsibility for the bankruptcy of the golf course.

According to documents first detailed in a 2016 BuzzFeed investigation, in 2008 Trump International entered into an arrangement with the owners of Coco Beach Golf & Country Club, a foundering resort and golf course that had opened in 2004 on the northeast coast of Puerto Rico about 30 miles from San Juan. Under the agreement, the future president's company licensed the Trump name to the owners and took on a share of the resort's day-to-day management in exchange for a fee.

The owners of the resort, which was renamed Trump International Golf Club Puerto Rico after 2008, had already received significant financial assistance from the Puerto Rican government before Trump's intervention. In 2000 and 2004, Puerto Rico's Industrial, Tourist, Educational, Medical and Environmental Control Facilities Financing Authority (AFICA) issued the owners of the club a total of $25,497,854 in bonds to help build and launch the resort. In 2009, the Puerto Rican government also invested $50 million in the Hotel Gran Melia, which was part of the resort and provided a crucial stream of customers for the golf club, according to BuzzFeed.

By October 2011, Coco Beach had defaulted on $26 million in bonds and had to seek another round of financing. In 2015, the company filed for bankruptcy under its original name, Coco Beach Golf and Country Club, citing debts of more than $78 million but only $9 million in assets. Bankruptcy court records show that Puerto Rico's Tourism Development Fund made a claim of $32,606,821, essentially leaving Puerto Rican taxpayers on the hook for the better part of $33 million.

Does all this mean that Trump "bankrupted" the golf course, though? Not exactly.

The evidence shows that Coca Beach had consistently been operating at a loss and accumulating debts in the years before Trump International became involved with its management. And a significant portion of the financial assistance provided by the Puerto Rican government was given in 2000 and 2004, well before the future U.S. president's company arrived on the scene.

Puerto Rico had already been hard hit by a recession well before the Trump International contracted to assist with the club's management, and in the two years before Trump International's intervention (2006-07), Coco Beach operated at an average annual net loss of $5.3 million, according to BuzzFeed. Moreover, neither Donald Trump nor Trump International held an ownership stake in the property, took part in its development, or was involved with its financing; they only operated and managed the resort. Holding Trump to be solely or primarily responsible for the bankruptcy of a business they didn't own, that was already heavily in debt, and was losing several million dollars a year before Trump arrived on the scene would be something of an unfair standard.

However, one could argue that Trump International received a good deal of money from the Coco Beach deal yet failed to turn the club around, or even stanch its financial bleeding. According to the March 2011 bond offering (which was itself required to cover losses on the Puerto Rican government's 2000 and 2004 bond investments), Trump International had given certain assurances about the future viability of the resort:

The continued operations of the Partnership are dependant [sic] upon the ability of the Club to attract customers and control operating expenses. Trump International Co. (Club Manager) has developed a plan to achieve and maintain positive operating cash flows sufficient to allow the Partnership to continue as a going concern. In particular, the Club Manager [Trump International] has developed programs to attract members and use the Club, while containing operating costs.

Whatever that plan was, it did not succeed. The 2012 financials show that the club's average annual losses rose to $6.3 million during the period that Trump's company provided management services to the resort (2008-2012), $1 million more per year than the business had been losing before. Further, for this lack of success, Trump International garnered a total of $609,607 in management fees between 2008 and 2012. (This figure is likely the source of Lainie Green's reference to a "$600,000 paycheck" received by Donald Trump.)

Donald Trump did not set Coco Beach Golf and Country Club on course for ruin, but he wasn't able to save it from that fate. His role in the bankruptcy of the company, which ended up costing Puerto Rican taxpayers $32.6 million, was significant but limited. That $32.6 million loss constituted 0.03 percent of the territory's total $123 billion debt, which prompted the Puerto Rican government to file for bankruptcy relief in May 2017.