You can't return it if it was never gone. 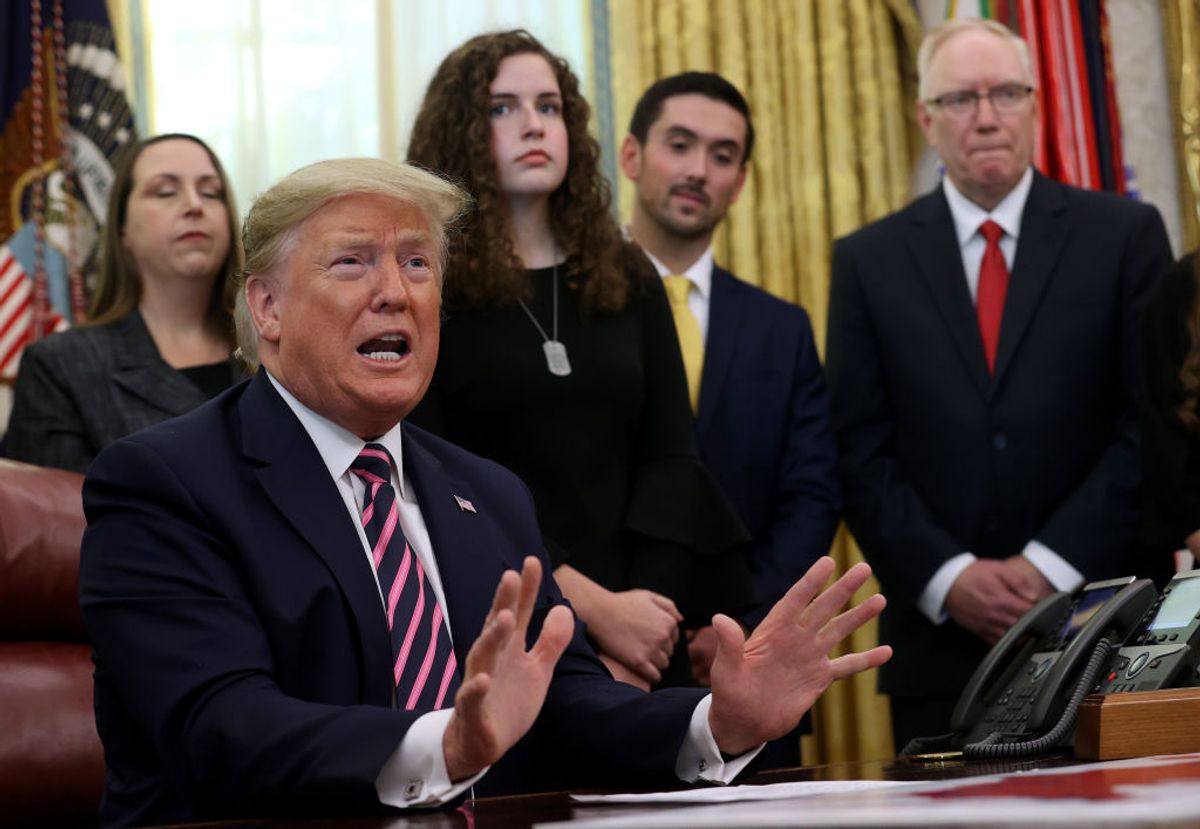 U.S. President Donald Trump on Jan. 16, 2020, stated at a gathering in the Oval Office that "we’re proudly announcing historic steps to protect the First Amendment right to pray in public schools." The move resulted in queries from Snopes readers asking whether Trump had "returned" or "reinstated" prayer in public schools.

Joined by Education Secretary Betsy DeVos, televangelist and adviser Paula White, and students who said they faced religious discrimination in school, Trump stated his guideline would counter "a growing totalitarian impulse on the far-left that seeks to punish, restrict, and even prohibit religious expression."

Seen as a nod to his voting base of evangelicals, Trump's rhetoric reflects the idea popular among conservative Christians that the 1962 U.S. Supreme Court ruling in Engel v. Vitale, which barred schools and employees acting in their official capacity from prescribing or requiring prayer, equated to banning prayer altogether in public schools.

But that is not the case. Students and student groups are free to pray at school, as well as participate in any number of religious activities, so long as those activities don't disrupt school functions or impede the liberties of others.

Trump's guideline, in fact, largely restated one created by President George W. Bush in 2003.  Because students were never barred from praying on their own in school, however, neither president "returned" prayer to public school.

Trump's guidance, per the Associated Press, buttresses the 2003 guidance by ordering that states "verify that school districts have no policies limiting constitutionally protected prayer, and to refer violators to the Education Department. That’s much like the 2003 guidance, but the new directive goes further by requiring states to provide ways for filing complaints against schools."

In a statement, Daniel Mach, director of the American Civil Liberties Union's Program on Freedom of Religion and Belief, said, "Despite the president’s hype, there’s very little that’s new in today’s ‘school prayer’ guidance. Importantly, both the Bush guidance and the copycat document released today [Jan. 16, 2020] affirm a core constitutional protection: School officials are prohibited from imposing their faith on students. The question, as always, is whether public-school officials will heed this warning. If they don’t, we’ll be there, as always, to correct them — and if necessary, we’ll see them in court."

Because you can't bring something back that never left, we rate the claim that Trump "returned" prayer to public schools as "False." Trump did not significantly update guidance from the one issued in 2003 and instead largely reiterated the preexisting rule; also, prayer was never banned in public schools.

Trump also announced a new rule that would make it easier for religious organizations that provide social services to receive federal contracts. As The Washington Post reported:

Civil rights groups said the new regulations will dismantle protections put in place by President Barack Obama to balance the rights of faith-based providers with those of LGBTQ individuals and other groups that have historically faced discrimination. Critics also accused the administration of using the flag of “religious freedom” to give more taxpayer dollars to Christian groups.

The White House. "Remarks by President Trump on the Announcement of Guidance on Constitutional Prayer in Public Schools."   16 January 2020.