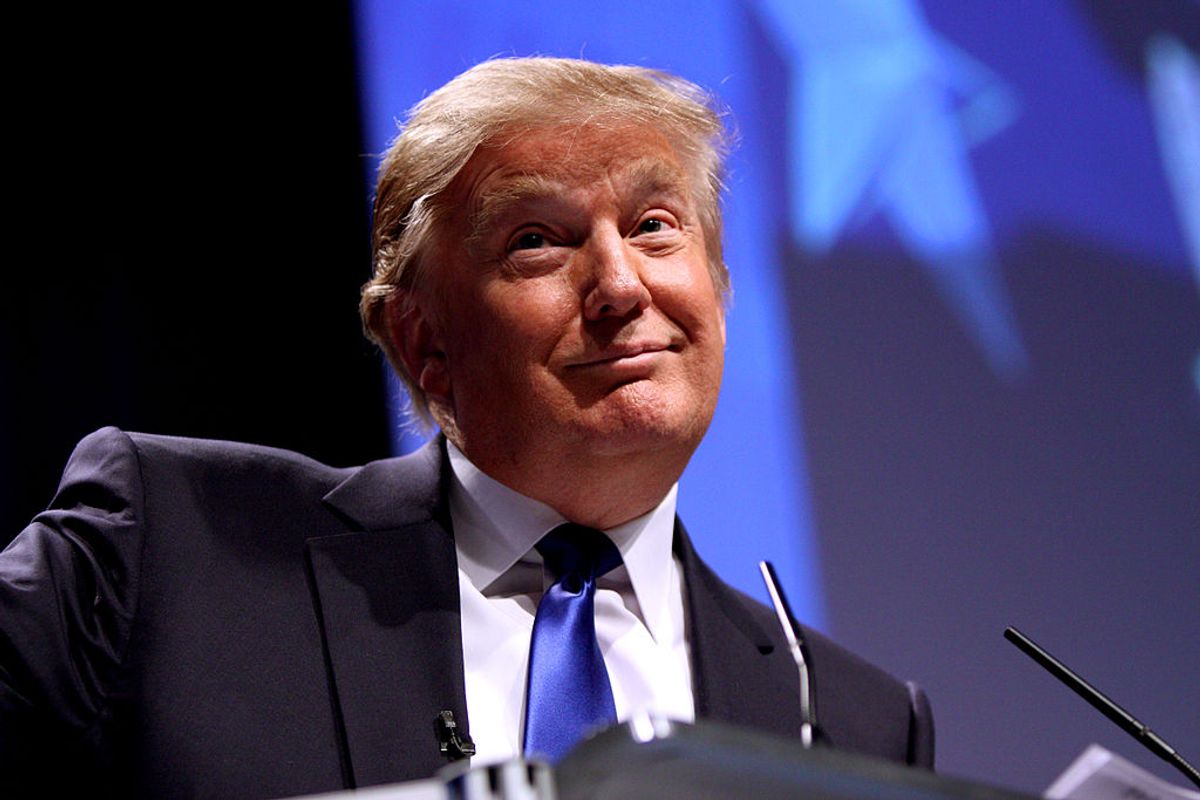 Donald Trump lamented the Supreme Court's Obergefell v. Hodges decision during a Fox News appearance and suggested that strategic Supreme Court appointments could overturn that ruling, and his running mate Mike Pence agreed that the legality of same-sex marriage is an issue that should have been left to the states.

Donald Trump did not say he planned to specifically and/or personally overturn the decision legalizing same-sex marriage.

On 31 January 2016, a number of social media users shared links to articles reporting that Republican presidential candidate Donald Trump had sworn to overturn the legality of same-sex marriage if elected President, with a New York magazine item of that date reporting:

In what is surely a last-minute bid for more support among conservative Christians in Iowa, Donald Trump has suggested that he would seek to overturn last summer's landmark ruling legalizing same-sex marriage in the U.S. Speaking with Chris Wallace on Fox News Sunday, Trump attacked the Supreme Court’s 5-4 decision, and confirmed he would "strongly consider" appointing new justices who would overturn the ruling, since he believes it should have been a states’-rights issue[.]

Donald Trump indeed appeared on Fox News Sunday with interviewer Chris Wallace on 31 January 2016 and briefly discussed the Supreme Court's landmark 5-4 Obergefell v. Hodges decision in 2015. A record of that discussion is available via a transcript provided by Fox:

WALLACE: But, Mr. Trump, let's take one issue.  You say now that the Supreme Court has ruled that same-sex marriage is the law of the land and that any politician who talks about wanting to amend the Constitution is just playing politics.  Are you saying it's time to move on?

TRUMP: No, I'm saying this.  It has been ruled up.  It has been there.  If I'm a, you know, if I'm elected, I would be very strong on putting certain judges on the bench that I think maybe could change things.

But they've got a long way to go.  I mean at some point, we have to get back down to business.  But there's no question about it.  I mean most — and most people feel this way.

They have ruled on it.  I wish that it was done by the state.  I don't like the way they ruled.  I disagree with the Supreme Court from the standpoint they should have given the state — it should be a states' rights issue.  And that's the way it should have been ruled on, Chris, not the way they did it.

This is a very surprising ruling.  And I — I can see changes coming down the line, frankly.  But I would have much preferred that they ruled at a state level and allowed the states to make those rulings themselves.

WALLACE: But — but just to button this up very quickly, sir, are you saying that if you become president, you might try to appoint justices to overrule the decision on same-sex marriage?

TRUMP: I would strongly consider that, yes.

Interviewer Chris Wallace initially questioned Trump about a statement made by the latter suggesting that he was disinterested in any sort of Republican party line opposing same-sex marriage because the issue had already been definitively decided by the Supreme Court. In response, Trump said the opposite: that he felt the matter of same-sex marriage should have been left to individual states to decide, and that he would "be very strong on putting certain judges on the bench that I think maybe could change things."

When Wallace questioned if Trump truly meant that he "might try to appoint justices to overrule the decision on same-sex marriage," the candidate responded by affirming that he "would strongly consider that."

Trump was clearly courting a political base with his answer about reversing the legality of same-sex marriage, but when asked if he planned to pursue such a course of action, Trump said only that he'd "consider it" (which is Trump's stock answer to a plethora of policy issues: a non-committal assurance that he will "look into" or "consider" a potential course of action).

The likelihood of a Trump administration taking whatever action it can to reverse marriage equality increased after the GOP nominee named Indiana Gov. Mike Pence, a social conservative with a long history of taking anti-LGBT stands, as his running mate. Pence's 2000 Congressional campaign web site listed the following position statements under the heading "Strengthening the American Family":

Congress should oppose any effort to put gay and lesbian relationships on an equal legal status with heterosexual marriage.

Congress should oppose any effort to recognize homosexuals as a "discreet and insular minority" entitled to the protection of anti-discrimination laws similar to those extended to women and ethnic minorities.

In June 2015, The Journal Gazette reported that Pence had made a statement echoing Donald Trump's position that same-sex marriage is properly a "state's rights issue":

Indiana Gov. Mike Pence issued a statement saying he is disappointed in the U.S. Supreme Court's ruling giving same-sex couples the right to marry in any state.

Pence said Friday he believes marriage is the union between one man and one woman and that he was disappointed the Supreme Court failed to recognize the historic role of the states in setting marriage policy. But he says his administration will uphold the law and abide by the court ruling.

In September 2016, Donald Trump vowed to sign the so-called "First Amendment Defense Act" (FADA), if passed by Congress, a bill that aims to prevent the federal government from enforcing marriage equality by taking punitive action against individuals, corporations, or organizations who discriminate against same-sex married couples. Critics say the bill would effectively legalize such discrimination.

Trump was elected President of the United States on 8 November 2016. Neither he nor Pence had significantly modified their stances on same-sex marriage between the primaries and the general election. While the president does not have the Constitutional power to overturn a Supreme Court decision, he does have the ability to appoint justices who would. Based on past statements of both the president- and vice president-elect, it seems likely that this will come to pass should any vacancies in the Supreme Court occur.