Are There Posters Calling Trump a 'Pendejo' Across Puerto Rico?

There is no proof that a viral image insulting the president has been posted "all over" the hurricane-damaged territory. 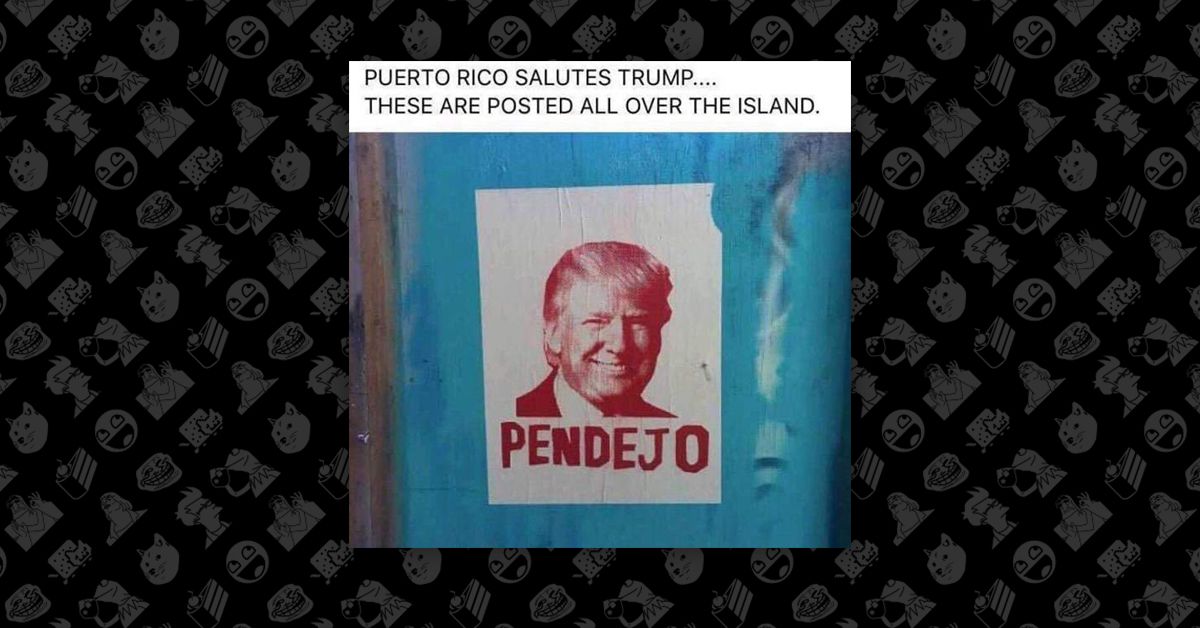 Claim:
A poster calling Trump a "pendejo" has been posted "all over" Puerto Rico.
Rating:

Resentment toward President Donald Trump's treatment of Latino communities resurfaced again when an image began circulating online of a poster purportedly "all over" Puerto Rico to coincide with the president's October 2017 visit there.

The image shows a white poster with Trump's face atop the word "PENDEJO" -- a Spanish-language slang term for an idiot. Some variations of the picture include the caption:

PUERTO RICO SALUTES TRUMP ...
THESE ARE POSTED ALL OVER THE ISLAND ...

The president received harsh criticism for his response to Hurricane Maria, which devastated the island in September 2017. Following his visit to Puerto Rico on 3 October 2017, during which he was seen throwing paper towels into a crowd of people, Carmen Yulín Cruz, mayor of the capital city of San Juan, said:

The terrible and abominable view of him throwing paper towels and throwing provisions of people, it does not embody the spirit of the American nation.

However, the "pendejo" photograph does not contain any information identifying it as having been taken in Puerto Rico. According to the Puerto Rican government, only 10 percent of Puerto Rican Electric Power Authority customers (PREPA) had electricity restored as of 6 October 2017, so it is unclear who could make and distribute a poster "all over" the territory. We are also skeptical that as Puerto Ricans face an uncertain future with a scarcity of food, water, electricity, and phone service, they have the resources and energy to launch an island-wide "pendejo" poster campaign.

If the image was taken on the island territory, and if there are indeed "pendejo" posters all over the island, it would not be surprising if they predate both the hurricane and Trump's visit. Snake Hawk Press, which is based out of San Antonio, Texas, has been selling the posters since at least September 2016 (and currently offers both a print and a t-shirt). The studio's owner, Cruz Ortiz, also created artwork for Democratic presidential nominee Hillary Clinton's campaign. T-shirt retailer Crazy Saguaro Tees also sells a shirt with the image.

Crazy Saguaro Tees told us that they did not create the image. We reached out to Snake Hawk Press seeking comment, but did not receive a response by press time.

Calling Trump a "pendejo" is not exactly a novel idea. Shortly after he announced his candidacy for the Republican presidential nomination in June 2015, a Guatemala-based company, Ilegal Mezcal, circulated posters in various U.S. cities with a picture of Trump's head alongside the message:

This photograph was taken by a Snopes staff member in Washington, DC, in September 2016:

We're putting them up as long as Trump continues to be an ass. So probably we'll be doing it for a while.

Trump in one word tonight:
#pendejo

Trump campaigned for the presidency on the promise that he would build a "wall" between the United States and Mexico. While announcing his candidacy on 16 June 2015 he said:

Lilley, Sandra and Herrera, Guadalupe. "'I Would Not Have Done That': Puerto Rico Officials React to Trump Visit." NBC News. 4 October 2017.