Did President Trump Say Pedophiles Will Get the Death Penalty?

In a 2012 tweet, Donald Trump called for a "fast trial, death penalty" for "perverts" who abduct children. 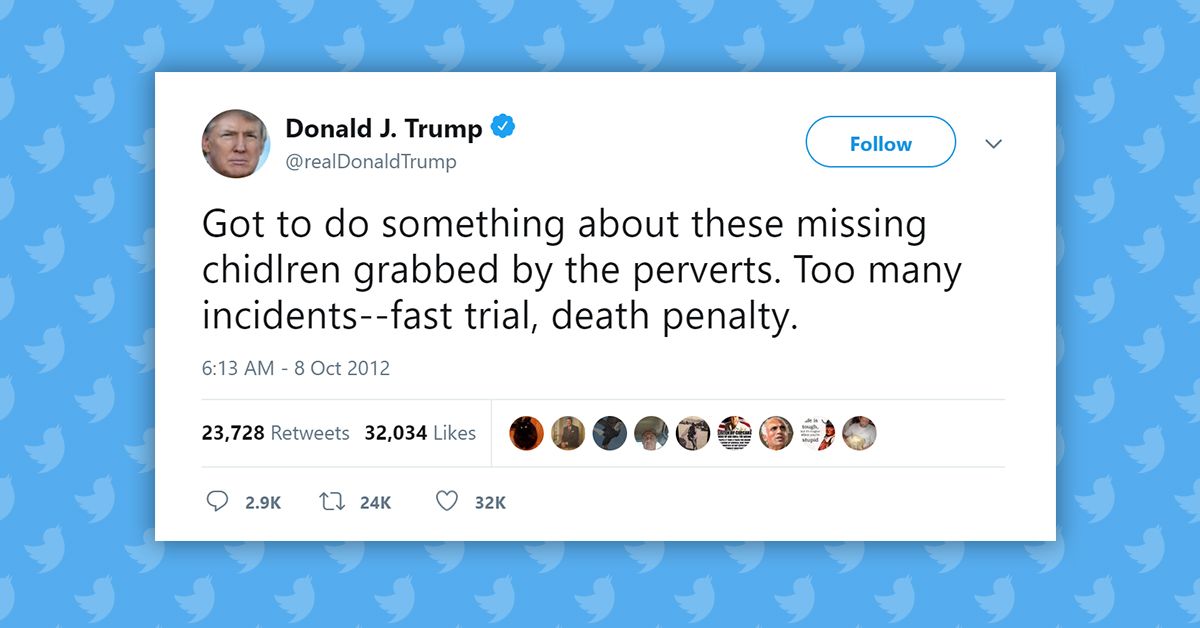 Claim:
President Trump has called for the death penalty for pedophiles.
Rating:

On 16 March 2017, the junk news web site social-consciousness.com published an article headlined "Donald Trump Says Pedophiles Will Get the Death Penalty" that opened as follows:

Donald Trump has vowed to tackle the child abduction crisis in the United States by giving pedophiles a fast trial resulting in the death penalty. In October of 2012, Donald Trump tweeted that there are “too many incidents” and something “must be done about these perverts.”

With the Pizzagate scandal going on right now and Elite pedophilia running rampant, could this be what Trump was referring to when he talked about “draining the swamp”, and how far up the social ladder will he be prepared to go when it comes to swiftly executing these offenders?

According to the National Center for Missing and Exploited Children, nearly 800,000 children are reported missing each year. That is more than 2,000 children abducted every single day. One every 40 seconds.

However, it seems that those days are coming to an end. Recently, hundreds of people have been arrested in nationwide “pizzagate” raids. A huge nationwide sting has seen over 500 people connected to child sex offenses arrested in the first of many raids.

Although the article was written to give readers the impression that President Trump had recently announced his intention to implement a policy of summary executions for pedophiles, it was based entirely on a single tweet posted by citizen Donald Trump more than four years before he came President of the United States:

Got to do something about these missing chidlren grabbed by the perverts. Too many incidents--fast trial, death penalty.

Trump didn't explain at the time what prompted his tweet, nor has he suggested executing "perverts" or "pedophiles" since then, according to an archive of his tweets. Moreover, his statement seemed to be aimed not at "pedophiles" in general, but specifically at those who abduct children for sexual exploitation.

Stories about shady rings of "elite" child predators are popular fodder for conspiracy theorists, and social-consciousness.com has reported that the false Pizzagate conspiracy theory is "going on right now," along with other fabricated clickbait stories bearing headlines such as "Brad Pitt Reveals: Elite Hollywood Pedophiles Control America" and "Vladimir Putin Reveals: The West Is Controlled by Satanic Pedophiles."