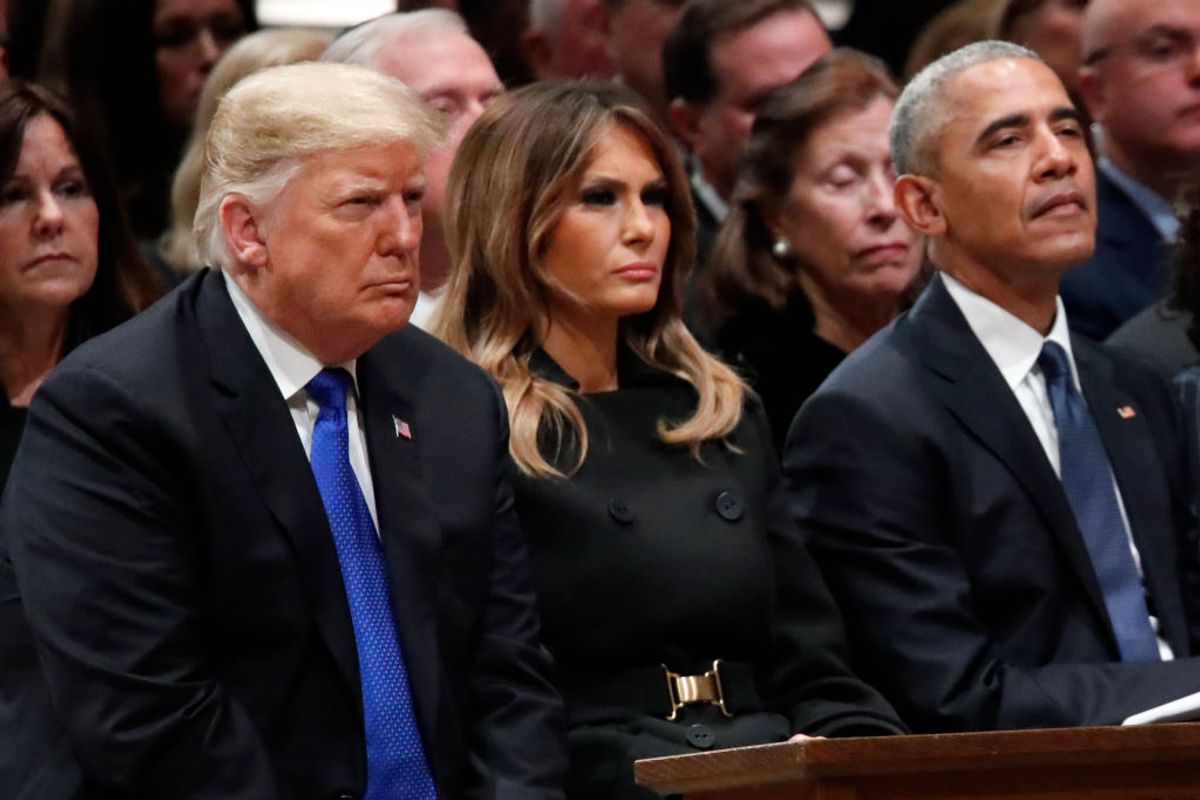 On Oct. 22, 2019, a link to an op-ed entitled "Trump's Obama envy is getting even worse" was shared to a number of anti-Trump Facebook groups, such as Anti Donald Trump, original DONALD TRUMP CLOWN UNIVERSITY, and DEFEAT TRUMP 2020!, along with an alleged excerpt from the article in which the president claimed that former President Barack Obama had written the emoluments clause of the U.S.Constitution:

Trump Accuses Obama Of Writing The US Constitution “Because He Knows The Constitution Is Very, Very Bad For Me”

Appearing on Fox and News, Trump accused Obama of writing the Constitution to make him look bad. “I know for certain that he wrote the emoluments clause, because he can’t stand to see me make so much illegal money,” Trump said.

“I’ve said all along, Obama is obsessed with me,” Trump said, adding, “He will do anything to make me look bad, but it never works and he can’t stand to see me winning.”

Busy day and so much winning. Time for golf. Trump did not claim that Obama wrote the emoluments clause of the Constitution during an appearance on Fox News, nor does this quote appear in the linked op-ed story published in The Washington Post.

Trump appeared on Fox News on Oct. 21, 2019, for an interview with Sean Hannity. While Trump mentioned Obama a number of times during that interview, he didn't accuse his predecessor of writing the Constitution, which was written more than 200 years ago.

Some readers may have been taken in by the fake quote because it was published a day after Trump described the emoluments clause as "phony."

President Donald Trump is still defending the White House’s decision to host next year’s G7 summit, a gathering of seven world leaders, at a Miami resort owned by Trump’s business — even though he abandoned the plan after it was widely criticized.

At a Cabinet meeting on Monday, he blamed the backlash against his attempt to profit from the G7 on “you people with this phony emoluments clause,” referring to a provision of the Constitution which prevents federal officials from being compensated by foreign governments.

While Trump may have called the emoluments clause "phony," he did not claim Obama wrote it. We therefore rate this claim "False."