Did Trump Refer to His Mouth as a Musical Instrument 'Hopefully' Attached to the Brain?

During a rally in Montana, President Trump went on a tangent about crowd size in which he compared his speeches to the performances of Sir Elton John. 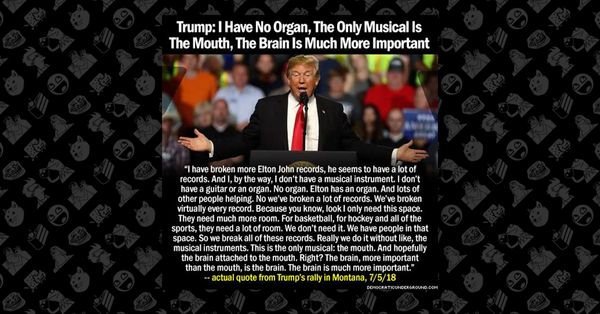 Claim:
In a 2018 rally, President Trump compared his mouth to Elton John’s organ, adding that the brain is “hopefully attached to the mouth.”
Rating:

During a 5 July 2018 rally in Montana, President Trump delivered a speech that complimented Russian President Vladimir Putin, attacked the press, and mocked the #metoo movement. As he is wont to do, the president spent a portion of the evening discussing the prodigious crowds his rallies inspire.

While attempting to begin a point about immigration policy, Trump veered off course to compliment his own rhetorical skills:

In a fairly nonsensical aside, Trump speculated about the reasons why he has (allegedly) broken so many crowd-size records held previously by musical artist Sir Elton John, adding that he has been able to do so without the help of an organ, guitar, or any other musical instrument:

Part of it, he continued to speculate, is that his rallies might allow more space for crowds compared to Elton John or to sporting events:

Because you know, look, I only need this space. They need much more room. For basketball, for hockey and all of the sports, they need a lot of room. We don’t need it. We have people in that space. So we break all of these records.

Then, bringing things full-circle, he insisted that the only musical instrument he required was his mouth, which he made special care to note was also part of a package that included the brain:

The exchange has been paraphrased or repeated in meme form, sometimes with the headline “Trump: I Have No Organ, The Only Musical Is The Mouth, The Brain Is Much More Important”: The text displayed above is a verbatim quote from Trump's speech at the rally, and as such we rank the claim true.