Did 'Live and Let Die' Play as Trump Toured Factory Without COVID-19 Mask?

According to the CDC, everyone should wear some sort of protection over their noses and mouths in public settings where it’s hard to keep distance between other people. 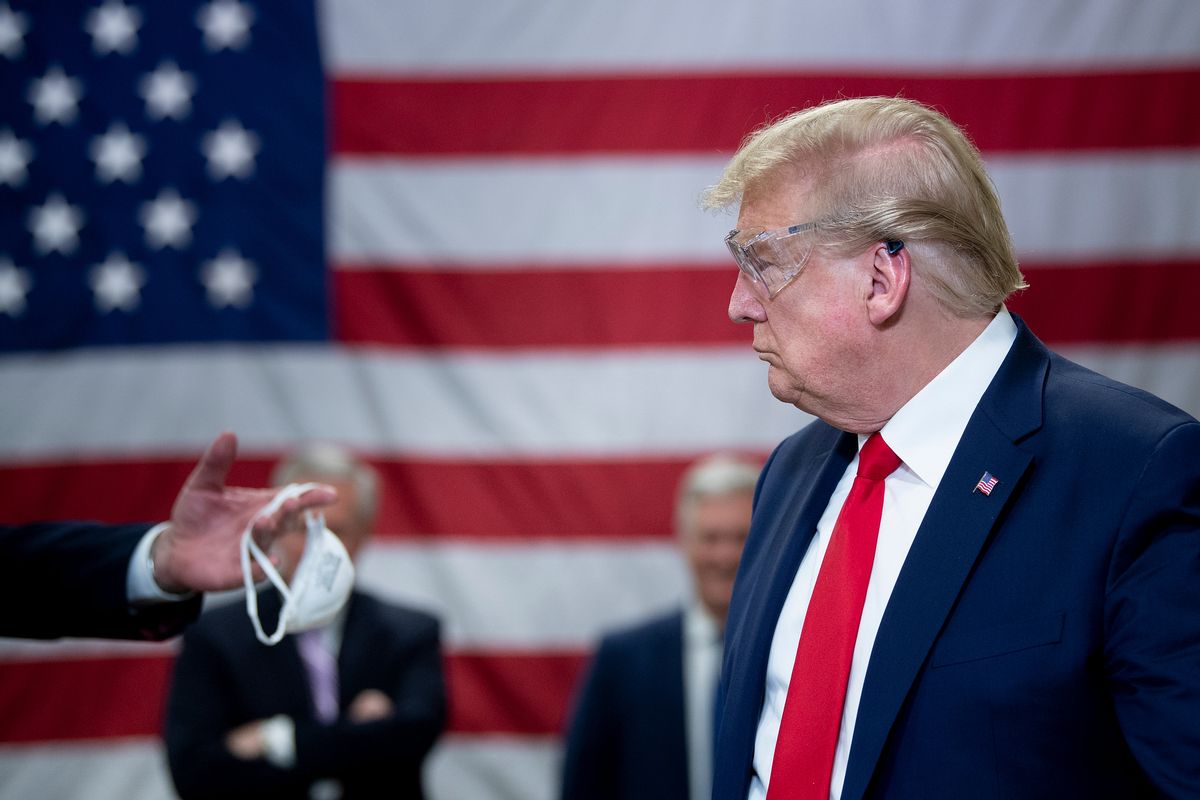 Claim:
During the COVID-19 coronavirus pandemic, U.S. President Donald Trump visited a manufacturing plant without wearing a face mask as Guns N' Roses' rendition of "Live and Let Die" played on loudspeakers during his visit.
Rating:

On May 5, 2020, as the reported number of Americans killed by the COVID-19 coronavirus disease reached a record of more than 65,700 people, videos surfaced online showing U.S. President Donald Trump touring a facility that produces face masks to prevent the spread of the virus — though he was not wearing a mask himself and the song "Live and Let Die" played simultaneously on loudspeakers.

News sources including Business Insider, Rolling Stone, and Los Angeles Times published headlines highlighting the footage from inside an Arizona Honeywell factory, where workers have ramped up production of N95 masks for the federal government during the pandemic. Twitter users — including late-night talk show host Jimmy Kimmel — chimed in on what appeared to be a scene of people, including the president, making light of the deadly crisis. Kimmel posted on Twitter: Political video editor for Washington Post Zach Purser Brown, who appeared to have witnessed the scene, also tweeted about it. Posting photos and videos from inside the Honeywell plant, he wrote:

President Trump is in a mask factory, not wearing a mask ... they are also somewhat inappropriately, blasting 'Live and let die' over the factory sound system... This really isn't the track you want to come on at this point.

Originally a 1973 James Bond theme song by British-American rock band Paul McCartney & Wings, the song "Live and Let Die" resurfaced in the American psyche in the early '90s thanks to a cover by rock band Guns N' Roses. That version received a Grammy Award nomination in 1993. But following the 9/11 terrorist attacks on the U.S., Clear Channel Communications — the country's largest chain of radio stations now known as iHeartMedia — placed the track on its list of "lyrically questionable" songs for stations to consider while creating playlists.

Aside from the Guns N' Roses song, Brown reported via Twitter that songs during Trump's Honeywell visit appeared to match the playlists of campaign rallies by Trump, who is seeking a second presidential term against presumptive Democratic nominee and former Vice President Joe Biden.

To aid our investigation into the claim, we researched the circumstances surrounding the apparent factory visit. According to the White House and an online log of the president's appearances, Trump arrived at the Honeywell plant midday, and he first participated in a roundtable discussion on campus with tribal and local leaders. After that, the president toured a N95 mask assembly line — where the viral incident took place — and then gave a speech to congratulate Honeywell workers on their efforts to boost production of N95 masks during the pandemic.

"Minutes ago we saw the brand new production lines where you're making high-quality N95 respirators, and they are made to perfection," he said, according to a video posted by the White House on May 5.

According to a video clip showing a portion of his assembly-line tour via Reuters, Trump and three men in suits wore protective eyeglasses but no facial gear to prevent the spread of COVID-19. Factory workers and Trump are heard talking about the masks as Guns N' Roses' rendition of "Live and Let Die" plays on a PA system, and the president is seen giving the thumbs up. One person in the background of the video clip appears to be wearing a mask and so does a worker behind the assembly line.

In public remarks since the U.S. COVID-19 outbreak in early 2020, Trump has emphasized that recommendations by public health officials to wear masks to limit the spread of infections are voluntary, and that he is "choosing not to do it." Yet before making the Honeywell plant visit on May 5, Trump told reporters at the White House he would wear a mask during the factory tour "if it's a masked facility," according to CNBC.

After the appearance, a White house official told CNBC that Honeywell had said Trump and other visitors did not need to wear masks during the visit.

According to recommendations by the Centers for Disease Control and Prevention (CDC), people should wear some sort of protection over their noses and mouths in public settings where it's hard to keep distance between others, or where high rates of COVID-19 are spreading from person to person. For most people, that means wearing a simple cloth facial covering and leaving the N95 respirators or surgical masks that are in short supply for health care workers and others on the front lines of combating the pandemic.

Trump's factory tour made headlines about one week after Vice President Mike Pence toured the Mayo Clinic in Rochester, Minnesota, without wearing a face mask — a decision he later told Fox News was wrong.

In sum, given the video footage of Trump's visit to the Phoenix Honeywell plant, recordings that include audio of Guns N' Roses' "Live and Let Die" playing during his tour, as well as reports by news media in which the White House commented on the fact that the president did not wear a mask, we rate this claim "True."

Here's Reuters' video of the incident:

Jankowicz, Mia.   "'Live and Let Die' blasted out as Trump toured a coronavirus mask factory without covering his face".    Business Insider.   5 May 2020.

Breuninger, Kevin and Dan Mangan.   "Trump says he will wear coronavirus mask at Honeywell factory if it is required".    CNBC.   5 May 2020.

The Centers for Disease Control and Prevention.   “Use of Cloth Face Coverings to Help Slow the Spread of COVID-19.”    9 April 2020.

The Centers for Disease Control and Prevention.   “Recommendation Regarding the Use of Cloth Face Coverings, Especially in Areas of Significant Community-Based Transmission.”     3 April 2020