Did Trump's DC Hotel Hike Prices on Date of His Fictional '2nd Inauguration'?

Some adherents to the QAnon conspiracy theories believe Trump will begin a second term on March 4, 2021. 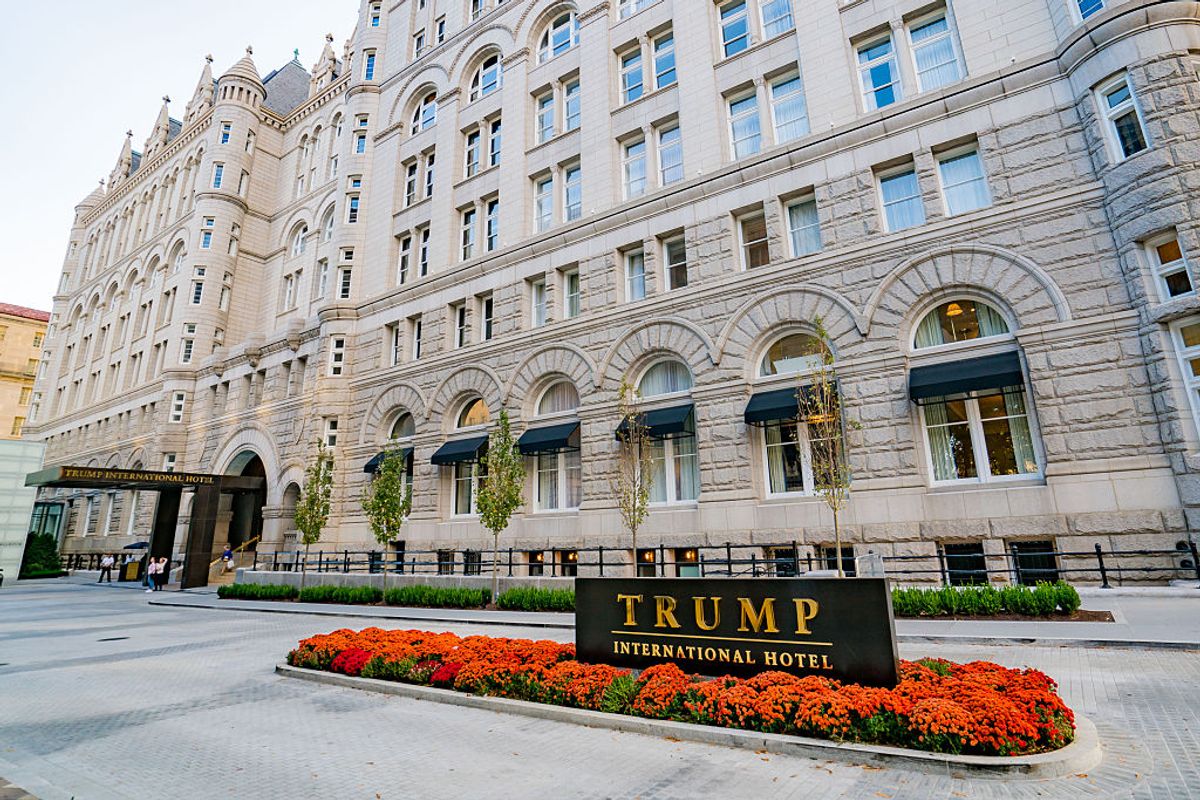 Claim:
Room rates at Donald Trump's Washington, D.C., hotel spiked dramatically for March 4, 2021 — the date on which some conspiracy theorists believe he will be inaugurated again.
Rating:

Prices for accommodation at Trump's Washington, D.C., hotel rose sharply for the dates of March 3 and March 4, 2021, and that sudden price hike was not common to other five-star hotels in the city, nor common to Trump's other hotels in Chicago and New York. March 4 is the date on which some pro-Trump conspiracy theorists believe he will be inaugurated for a second term.

It's not clear what the reason was for the drastic, two-day increase in room rates at Trump's Washington, D.C., hotel.

In February 2021, reports emerged that former U.S. President Donald Trump's Washington, D.C., hotel had drastically increased its room rates for March 4 — the date on which some conspiracy theorists believe he is to be inaugurated for the second time and begin his second term as president.

On Feb. 7, Business Insider published an article with the headline "Trump's DC hotel is hiking prices for March 4, the day QAnon followers think the former president will be sworn in." The article stated that:

QAnon's most dedicated followers still believe that former President Donald Trump will soon be sworn in. They insist that Trump will return to power and be inaugurated in Washington, DC, on March 4.

Coincidentally, the Trump International Hotel in Washington, DC, has hiked the prices of suites around that day. Some room rates at the hotel, just blocks from the White House, have almost tripled for March 3 and 4...

On Feb. 6, Forbes reported that:

At the Trump International Hotel in Washington DC, the least expensive room option is the deluxe king, ranging in size from 350 to 475 square feet. At this time of year, it normally runs anywhere from $476 to $596 per night.

Interestingly, on March 3 and 4, the same room is selling for $1,331 per night. That’s 180% above the base rate and more than double what you’d pay any other night in February or March, according to the hotel’s website.

Those reports contained a high degree of accuracy. Room rates at Trump's Washington, D.C., hotel were indeed remarkably high for March 3 and 4, and that sudden spike was not replicated at other five-star hotels in the nation's capital, nor at other Trump hotels. It was not possible to confirm the reason for the two-day price hike, and the ex-president's hotel company did not respond to our enquiries.

We recorded the price of the most basic accommodation available at Trump's hotel between Feb. 28 and March 7, 2021, for one person for one night, and compared it with comparable accommodation at three other five-star hotels in Washington, D.C.: Sofitel; the Four Seasons; and Conrad Washington. We used each hotel's own website, and recorded the data on Feb. 8, 2021. The rate of a slightly nicer room at Trump's hotel also spiked on March 3 and 4. Over the eight days in question, the median cost for a suite at the former president's hotel was $1,207. On March 3 and 4, it suddenly increased to $1,976 — which is 64% higher.

The March 3 and 4 price hike was also not common to all Trump's hotels — it was specific to his Washington, D.C., establishment. At Trump's New York City hotel, a night in a "guest room" was priced at $540 on March 3 and 4 — the exact same rate as the five days surrounding those dates. In Trump's Chicago hotel, the same room cost $325 per night between Feb. 28 and March 4, rising slightly to $370 on March 5 and 6.

So the sudden, drastic two-day increase in room rates at Trump's Washington D.C. hotel was real, significant, was not part of a wider trend among five-star hotels in the city, was not a regular Wednesday and Thursday event, and was not common to all Trump hotels. It therefore defies explanation, at least so far.

Snopes asked Trump hotels to explain the anomaly, and invited the company to respond to speculation that it was motivated by a desire to take advantage of a possible influx into Washington, D.C., of Trump supporters who hold to the baseless conspiracy theory that Trump will be inaugurated again on March 4. We did not receive a response. If we receive any relevant, additional information or context, we will update this fact check accordingly.