A woman posted an image of a petition that she says an anonymous individual gave her at the hotel bar, prompting a rumor that guests were receiving it upon check-in. 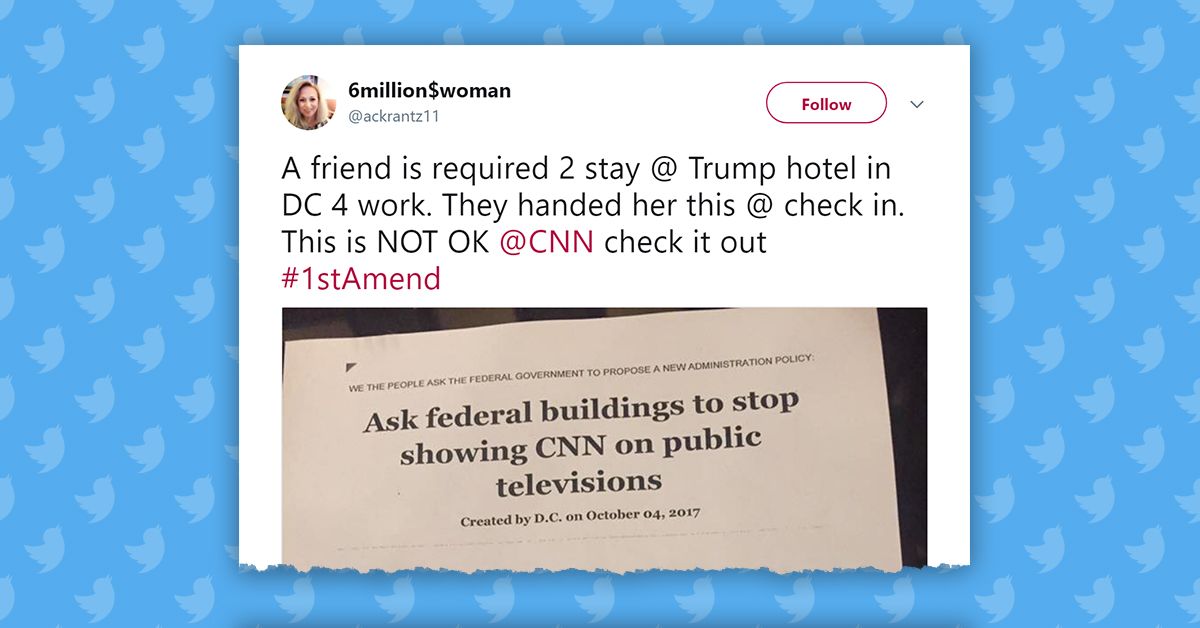 Claim:
The Trump International Hotel in Washington D.C. handed out flyers promoting an anti-CNN petition to guests at check-in.
Rating:

Donald Trump's well-documented hatred for CNN fed a rumor in October 2017 that, upon checking at his Washington, D.C. hotel, guests were being asked to sign a petition against showing the news network on TVs in federal buildings. This rumor appears to have originated from a single Facebook post that has either been deleted or made private. On 10 October 2017, Twitter user @ackrantz11 posted a screenshot purportedly showing the original post and claimed that a "friend" had received the flyer when she checked in to the Trump Hotel: We identified and interviewed the woman pictured in this Facebook post. She told us that she was never actually a guest at the Trump Hotel in Washington D.C. She did, however, use Facebook's "check in" feature when she stopped in for a few drinks at the lobby bar. While she was there, an anonymous person handed her the flyer. She said:

There's been a lot of misinformation about this. I did not stay at the hotel. I was there for drinks at the lobby bar. These flyers were being passed out. I have no idea who gave it to me. I don't know if it was a staff member or not. Other people were handed the flyer in the bar. At first, I didn't read it because I was talking to someone. I'm not a Trump supporter and after I read it I posted it on fb.

This has gotten blown out of proportion a little bit.

The original Facebook post did not claim that hotel staff had handed out the flyer or that every guest received it at check-in. Yet, as the image spread on social media, the claim was exaggerated.

No idea who this person is. My friend posted something similar. I think this person just copied it. I think they assumed when I "checked in" on fb I was checking in to the hotel. This person sure seems to answer a lot of questions about my stay though!

When we asked a spokesperson for the hotel whether guests were receiving the fliers at check-in, we were told:

We have no knowledge of this and it is not true.

This flyer does detail a real petition on WhiteHouse.gov (it has just over 50 signatures as of this writing). Anyone can create a WhiteHouse.gov petition.

Finally, if the petition was indeed being handed to every guest at the hotel (or even every customer at the lobby bar), it would likely have been posted multiple times. Yet we have only come across a single image of the document, indicating that this was likely an isolated incident.