Was Donald Trump Fined for 'Stealing' Money Intended for Veterans?

Social media posts and memes badly misrepresented the facts surrounding the November 2019 resolution of a high-profile lawsuit against the president. 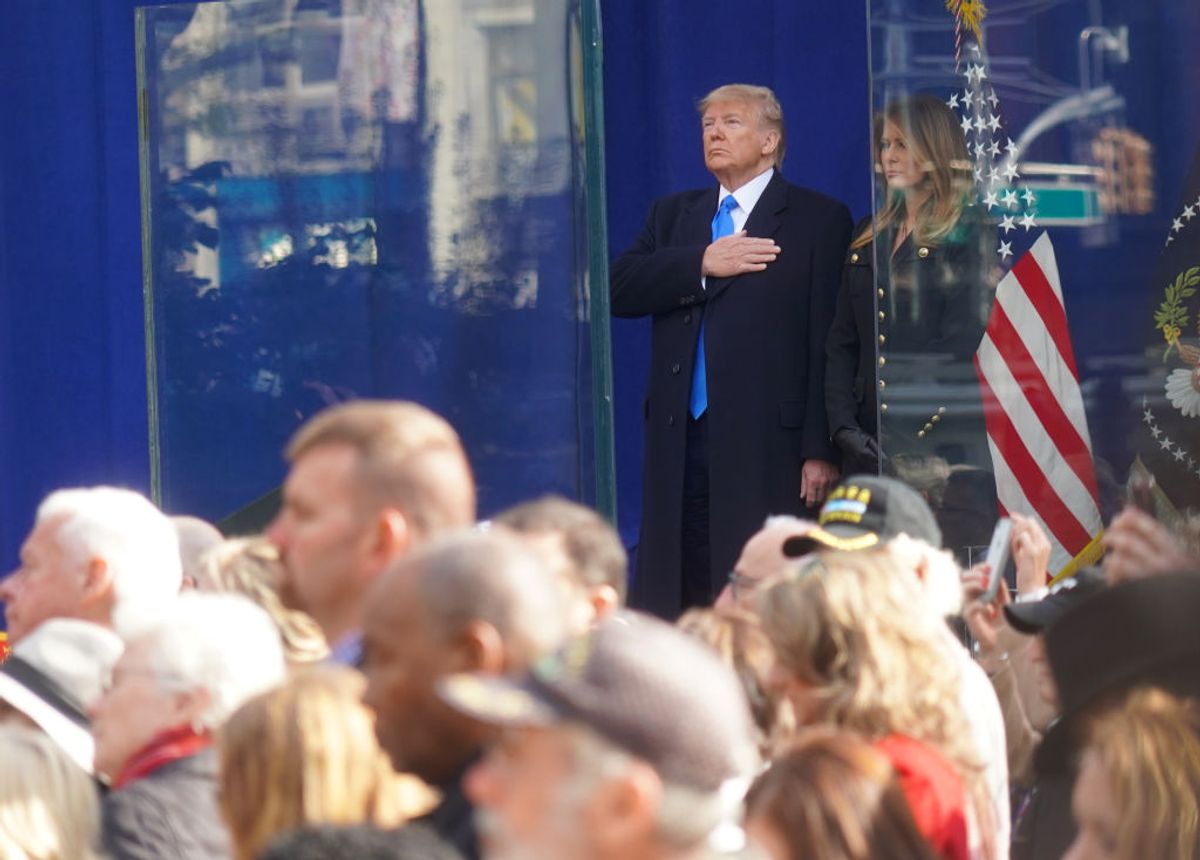 In November 2019, the New York Supreme Court ordered Trump to pay $2 million in damages for the waste incurred when his 2016 presidential campaign orchestrated and benefited from the distribution of funds to veterans groups, which had been donated by the public.

However, neither Trump, nor his children Ivanka and Eric, nor his foundation, were found to have "stolen" or kept any of the donations, and so none of them "admitted to" any such actions. The New York Supreme Court explicitly acknowledged that all the funds raised for veterans groups had ultimately reached veterans groups.

In November 2019, we received multiple inquiries about the accuracy of claims that U.S. President Donald Trump had been fined $2 million by a New York court because he was found to have "stolen" charitable donations intended for military veterans.

For example, former Democratic Virginia State Senate candidate Qasim Rashid tweeted on several occasions in November 2019 that Trump had "stolen" $2.8 million in charitable donations from veterans, and that he had admitted as much in court:

The President stole $2.8M in charity from Veterans & spent it on himself & admits to his crime in court documents.

As you speak of honor & service—Where is your accountability of a President who trampled on both?

One of Rashid's tweets was later reposted in the form of a meme by the Facebook page Act.tv. (The meme was later deleted): Another widely shared meme claimed, "It is a fact that draft dodger Trump stole charitable cash donations that were meant for our veterans":

These social media posts and memes grossly misrepresented the facts surrounding a November 2019 settlement agreement between the New York Attorney General, on one hand, and the Donald J. Trump Foundation, Trump himself, and his children Ivanka and Eric, on the other hand.

The claims were related to a lawsuit brought by the New York Attorney General's office in June 2018 against the Trump Foundation, the president, and Ivanka and Eric Trump, in their capacity as board directors of the charity. We've written about the case in detail in a previous fact check.

"For more than a decade, the Donald J. Trump Foundation has operated in persistent violation of state and federal law governing New York State charities. This pattern of illegal conduct by the Foundation and its board members includes improper and extensive political activity, repeated and willful self-dealing transactions, and failure to follow basic fiduciary obligations or to implement even elementary corporate formalities required by law.”

One of the examples of "improper political activity" cited in the lawsuit related to a January 2016 fundraiser that the Trump Foundation and Trump's presidential election campaign jointly operated.

In January 2016, days before the Iowa caucuses, Trump complained of unfair treatment by Fox News anchor Megyn Kelly and announced he would be boycotting the next Republican primary debate and instead host a fundraiser for veterans' charities in Iowa.

The event raised around $5.6 million, with roughly half going to the Trump Foundation, and half going directly to specific veterans charities. The Trump campaign directed the distribution of funds to recipient charities, and Trump himself repeatedly presented checks at campaign rallies and more broadly used the distribution of funds to boost his presidential campaign.

On the basis of those allegations, Underwood requested several outcomes, including asking the court to "dissolve the Foundation for its persistently illegal conduct, enjoin its board members from future service as a director of any not-for-profit authorized by New York law, to obtain restitution and penalties, and to direct the Foundation to cooperate with the Attorney General in the lawful distribution of its remaining assets to qualified charitable entities.”

The parties to the lawsuit spent around a year negotiating a settlement. In December 2018, for example, all sides agreed that the Foundation would be dissolved and its assets distributed to a list of mutually agreed charities.

In November 2019, the New York Supreme Court published the final settlement. As part of that settlement between the parties, Trump, his children and the Foundation stipulated to (agreed upon) a set of facts, among them the following section related to the Iowa veterans fundraiser:

The website for the Iowa Fundraiser, DonaldTrumpForVets.com, was developed by campaign personnel and, with the agreement of the Foundation, featured the name of the Foundation at the top of the home page and informed visitors that "the Donald J. Trump Foundation is a 501 (c)(3) nonprofit organization";

The campaign planned, organized and paid for the Iowa Fundraiser, with administrative assistance from the Foundation; and the campaign directed the timing, amounts and recipients of the Foundation's grants to charitable organizations supporting military veterans;

The Iowa Fundraiser raised approximately $5.6 million in donations for veterans groups, of which $2.823 million was contributed to the Foundation; the balance was contributed by donors directly to various veterans' groups. At Campaign events in Iowa on January 30, January 31, and February 1, 2016, Mr. Trump personally displayed presentation copies of Foundation checks to Iowa veterans' groups. On May 31, 2016, at a Campaign press conference, Mr. Trump announced the grants the Foundation made to veterans' groups with the proceeds of the Iowa Fundraiser and, on or about the same day, the Campaign posted on its website a chart identifying the grant recipients.

The New York Attorney General's office objected to the way in which the Trump Foundation had been used to advance the interests of the Trump campaign, and especially the way in which the campaign dictated how more than half of the funds were to be distributed, with Trump at times personally handing out checks at campaign rallies. The Attorney General's Office did not object on the grounds that Trump, his children, or his foundation, had stolen or kept the money.

The Attorney General has argued that I should award damages for waste of the entire $2,823,000 that was donated directly to the Foundation at the Fundraiser. In opposition, Mr. Trump notes that the Foundation ultimately disbursed all of the Funds to charitable organizations and that he has sought to resolve consensually this proceeding.

As stated above, I find that the $2,823,000 raised at the Fundraiser was used for Mr. Trump’s political campaign and disbursed by Mr. Trump’s campaign staff, rather than by the Foundation, in violation of [New York law]. However, taking into consideration that the Funds did ultimately reach their intended destinations, i.e., charitable organizations supporting veterans, I award damages on the breach of fiduciary duty/waste claim against Mr. Trump in the amount of $2,000,000, without interest, rather than the entire $2,823,000 sought by the Attorney General. [Emphasis added].

Trump was ordered to pay $2 million to a list of agreed-upon charities as damages for the waste incurred by the fact that his political campaign orchestrated and benefited from distributing around $2.8 million in donations to veterans groups. (That $2 million in damages was separate from the roughly $1.7 million the Trump Foundation had already agreed to distribute to various charities, as part of the resolution dissolving the Foundation.)

Neither Trump, nor his children, nor his charity, were found to have "stolen" or kept the funds, and so none "admitted" to such actions (as Rashid falsely claimed in his tweets). The New York Supreme Court explicitly acknowledged that all the funds raised from the January 2016 Iowa event did ultimately end up with veterans groups.

The irony in those claims was that it was, in fact, the manner in which the Trump Foundation and Trump campaign colluded in distributing the donations to veterans charities that landed the president in hot water, not his having "stolen" the donations.