During a televised town hall ahead of Election Day, Trump tried to sidestep his past, tentative embrace of the conspiracy theorist movement. 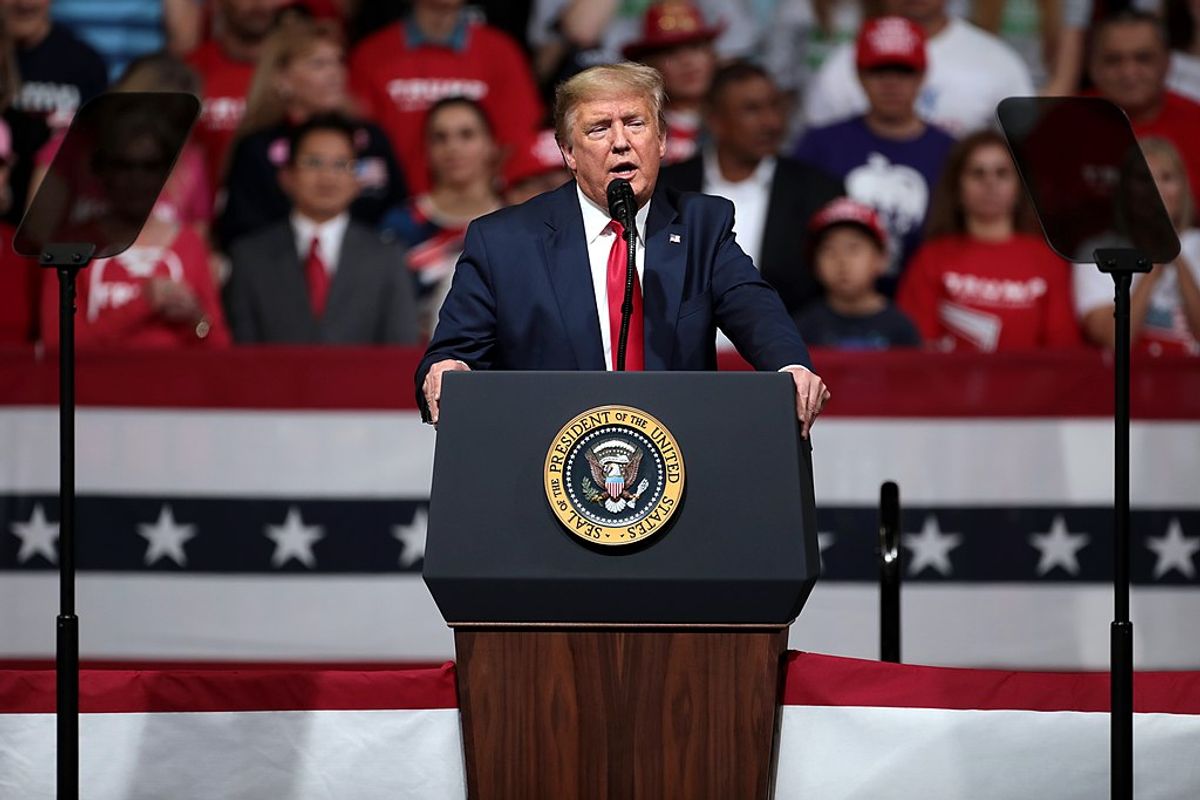 A few weeks after Trump failed to condemn the Proud Boys, a white supremacist group, during the first presidential debate in September, he doubled down on his refusal to denounce the QAnon movement and its wide-ranging array of conspiracy theories in a heated exchange with NBC News’ host Savannah Guthrie.

QAnon is a fringe but popular far-right movement that can be traced back to 2017, with believers spread across the internet claiming that Trump is waging a secret war against elite, cannibalistic, Satan-worshipping pedophiles in business, government, and media. The believers argue that this battle will lead to a day of reckoning when prominent figures like Hillary Clinton and others will be executed. Their ideology unites conspiracies surrounding the "deep state," UFOs, "false flag" events, and fake death plots.

Guthrie asked Trump if he would state that QAnon’s prevailing conspiracy theory about Democrat pedophile cabals was not true, and if he would “disavow” QAnon in its entirety. The following exchange occurred:

Guthrie: I just told you.

Trump: [...] you told me but what you tell me doesn’t necessarily make it fact, I hate to say that. I know nothing about it. I do know that they are very much against pedophilia, they fight it very hard [...]

Guthrie: They believe it is a Satanic cult run by the deep state.

Trump: He may be right.

Guthrie: Why not just say, it's crazy and not true?

Trump: Can I be honest? He may be right. I just don't know about QAnon.

Guthrie: You do know.

Trump: [...] let me just tell you. What I do hear about it, is they are very strongly against pedophilia. And I agree with that. I mean, I do agree with that --

Trump: ... and I agree with it very strongly.

Guthrie: But there's not a Satanic pedophile cult being run by-

Trump: I have no idea. I know nothing about them.

Guthrie: You don't know that? OK.

The exchange indicated that Trump wanted to avoid condemning the conspiracy theories outright. Later on during the town hall, Guthrie asked him about retweeting other conspiracy theories about Joe Biden, to which Trump responded: “that was a retweet. I'll put it out there. People can decide for themselves. I don't take a position.”

Video of the full exchange starting at 13:41, can be found here:

This is not the first time Trump has addressed QAnon.

In August, he said from the White House: “I don't know much about the movement other than I understand they like me very much, which I appreciate.” He suggested QAnon followers approved of how he handled unrest in Portland, Oregon, after anti-police brutality protests, and said he “heard these are people that love our country.”

Given the video evidence, and the widespread coverage, we rate this claim as “True.”

Newton, Creede.   "What is QAnon, the Conspiracy Theory Spreading Throughout the US."    Al Jazeera English.   8 October 2020.