Is This Meme About Trump and Epstein Accurate? 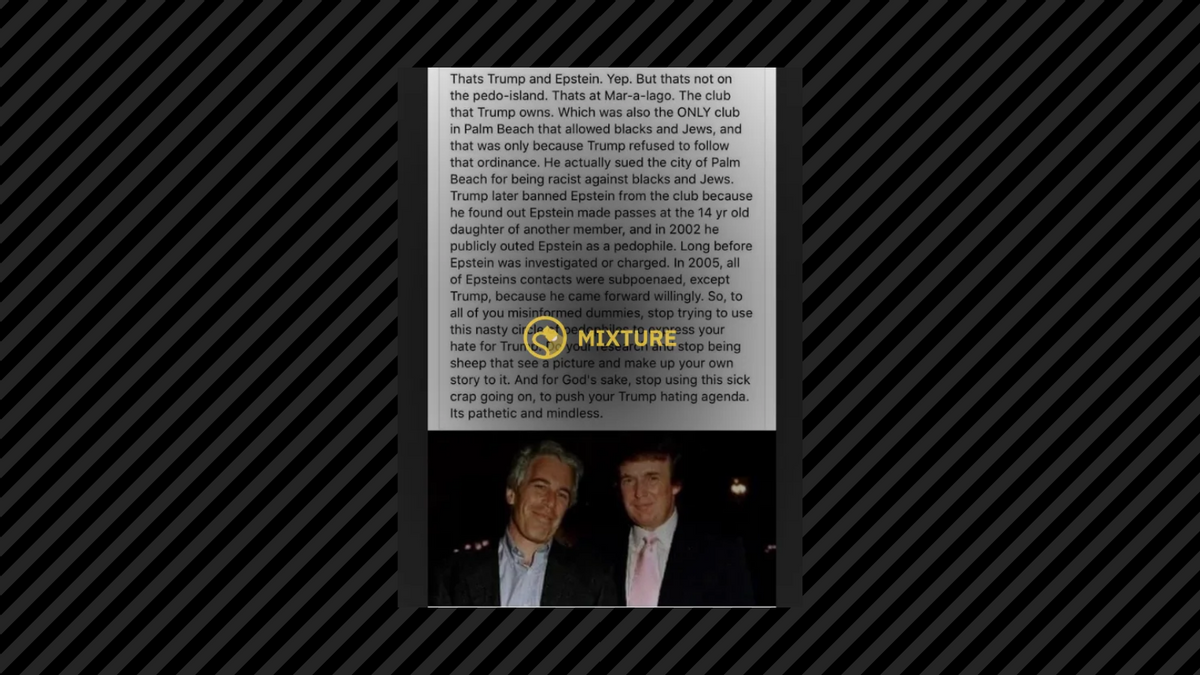 Trump raised an issue with the Palm Beach City Council about segregated private clubs, eventually barred Epstein from Mar-a-Lago, and voluntarily provided information to assist some of Epstein's victims build a case against him.

Trump did not "sue Palm Beach for being racist," nor did he "out Epstein as a pedophile" in 2002.

On July 6, 2019, financier Jeffrey Epstein -- who in 2008 had plead guilty to felony sex-related charges in Florida and was required to register as a sex offender as a result -- was again arrested on felony sex trafficking charges. Although Epstein committed suicide in his jail cell several weeks later, rumors and accusations continue to fly about which high-profile persons who were friendly with Epstein may have known about, or even participated in, illegal sexual activities with minors taking place at Epstein's so-called "Pedophile Island in the U.S. Virgin Islands (and elsewhere).

One prominent celebrity who often socialized with Epstein beginning in the latter part of the 1980s was Donald Trump, who by the time of Epstein's 2019 arrest had become President of the United States. Although Trump and Epstein apparently had long since ceased to remain on speaking terms by 2019, Trump's name continued to be connected with Epstein's illegal activities throughout the 2016 presidential campaign and beyond, due in large part to a lawsuit initially filed against Trump and Epstein in April 2016 by a woman who claimed that Trump had repeatedly raped her at several Upper East Side parties hosted by Epstein in 1994, when she was just 13 years old. (The first filing of the lawsuit was dismissed by the court; the second was voluntarily withdrawn by the plaintiff because, she claimed, her life had been threatened.)

In mid-2020, a meme circulated via social media sought to defend Trump against such accusations by offering positive information about him, including claims that Trump had booted Epstein from his Mar-a-Lago club for inappropriate behavior towards a teenager, had "outed Epstein as a pedophile" early on, and had voluntarily provided information to help Epstein's victims build a case against the financier: This meme offers a mixed bag of factual and inaccurate or misleading information, as detailed below:

The first part of the text, about Trump's defying a Palm Beach ordinance and refusing to exclude Black people and Jews from his club Mar-a-Lago, has a kernel of truth to it, but the wording used is a bit misleading. It wasn't the case, as the meme implies, that a local law required Trump to exclude "Blacks and Jews" from his club, but he refused to follow that law and "sued" to have it abolished. Rather (as we detailed in an earlier article), when Trump sought to convert Mar-a-Lago (which he had purchased in 1985) from a private estate to a club in the 1990s, he was disgruntled that the town council imposed a series of operational restrictions upon his plans that were more stringent than the restrictions placed on upon existing (segregated) clubs and vehemently criticized local officials over the matter. Trump was eventually successful in getting most of those restrictions overturned:

The town council, seeing Trump as an ostentatious outsider, handed him a list of restrictions as he sought to transform the property in the 1990s. Membership, traffic, party attendance, even photography — all would be strictly limited.

But Trump undercut his adversaries with a searing attack, claiming that local officials seemed to accept the established private clubs in town that had excluded Jews and blacks while imposing tough rules on his inclusive one.

Trump’s lawyer sent every member of the town council copies of two classic movies about discrimination: A Gentleman’s Agreement, about a journalist who pretends to be Jewish to expose anti-Semitism, and Guess Who’s Coming to Dinner, about a white couple’s reaction to their daughter bringing home a black fiance.

The move infuriated council members, who said it was a distraction from their concerns that Trump’s club would spoil a quiet street. But, in time, Trump got most of the restrictions lifted.

“He won in the court of public opinion,” said Jack McDonald, who was a council member at the time and who went on to be mayor and to join Mar-a-Lago.

Trump didn't publicly state what prompted his falling-out with Epstein, but the 2020 book "The Grifter's Club" attributed it (via a second-hand source) to Trump's kicking Epstein out of his Mar-a-Lago club after Epstein allegedly harassed another club member's teenage daughter:

Donald Trump severed ties with Jeffrey Epstein after the disgraced financier hit on the teenage daughter of a Mar-a-Lago member, threatening the Trump brand of glitz and glamour, according to a new book published about the president’s Palm Beach club.

[A] new book titled “The Grifter’s Club” says the late sex trafficker was indeed a member [of Mar-a-Lago] and that the two stopped talking — and Epstein was kicked off the rolls and banned from Mar-a-Lago — following the incident with a club member’s teen daughter.

Another club member explained that Trump “kicked Epstein out after Epstein harassed the daughter of a member. The way this person described it, such an act could irreparably harm the Trump brand, leaving Donald no choice but to remove Epstein,” said Sarah Blaskey, a Miami Herald investigative reporter who co-wrote the book with Miami Herald journalists Nicholas Nehamas and Jay Weaver and Caitlin Ostroff of the Wall Street Journal. “The Trump Organization did not respond to our requests for comment on this or other matters.”

A July 2019 New York Times article provided a slightly different story, however, quoting a former Trump campaign aide as saying that Trump had banned Epstein from his club because Epstein "had tried to recruit a woman who worked" there:

Sam Nunberg, a former campaign aide to Mr. Trump, said he raised concerns about the candidate’s involvement with Mr. Epstein before Mr. Trump officially began his presidential campaign. But Mr. Trump assured Mr. Nunberg that he had barred Mr. Epstein from entering his clubs after Mr. Epstein had tried to recruit a woman who worked at Mar-a-Lago.

“Trump said, ‘I kicked him out of the clubs when this stuff became public, and I made sure NBC knew,’” Mr. Nunberg recalled.

We found nothing suggesting that Trump had "outed Epstein as a pedophile" in 2002, however. Their friendship apparently didn't end until after that, and an October 2002 New York magazine profile of Epstein quoted Trump as still speaking quite positively of the financier at that time:

“I’ve known Jeff for fifteen years. Terrific guy,” Trump booms from a speakerphone. “He’s a lot of fun to be with. It is even said that he likes beautiful women as much as I do, and many of them are on the younger side. No doubt about it — Jeffrey enjoys his social life.”

The reference to Trump's being the only one of Epstein's contacts who was not subpoenaed in 2005 because he came forward voluntarily appears to be a garbled version of an occurrence from 2009, when Trump was in fact served with a subpoena but rendered it unnecessary by proactively coming forward to volunteer information:

Brad Edwards, an attorney who represented several of Epstein's victims, said that when he served Trump with a subpoena in a case against Epstein in 2009, Trump was "the only person who picked up the phone and said, 'Let’s just talk. I’ll give you as much time as you want. I'll tell you what you need to know.'" Edwards said Trump "was very helpful in the information that he gave and gave no indication whatsoever that he was involved in anything untoward whatsoever." Edwards continued, saying Trump offered "good information that checked out and that helped us."

The July 2020 arrest and indictment of long-time Epstein associate and girlfriend Ghislaine Maxwell on charges of enticement of minors and sex trafficking of children has kept Epstein's illicit sexual activities in the forefront of the news even beyond his death.