Will President Trump Display the Names of Campaign Donors During the State of the Union?

If you donate to President Donald Trump’s re-election, your name will appear during a campaign-run livestream of his State of the Union address. 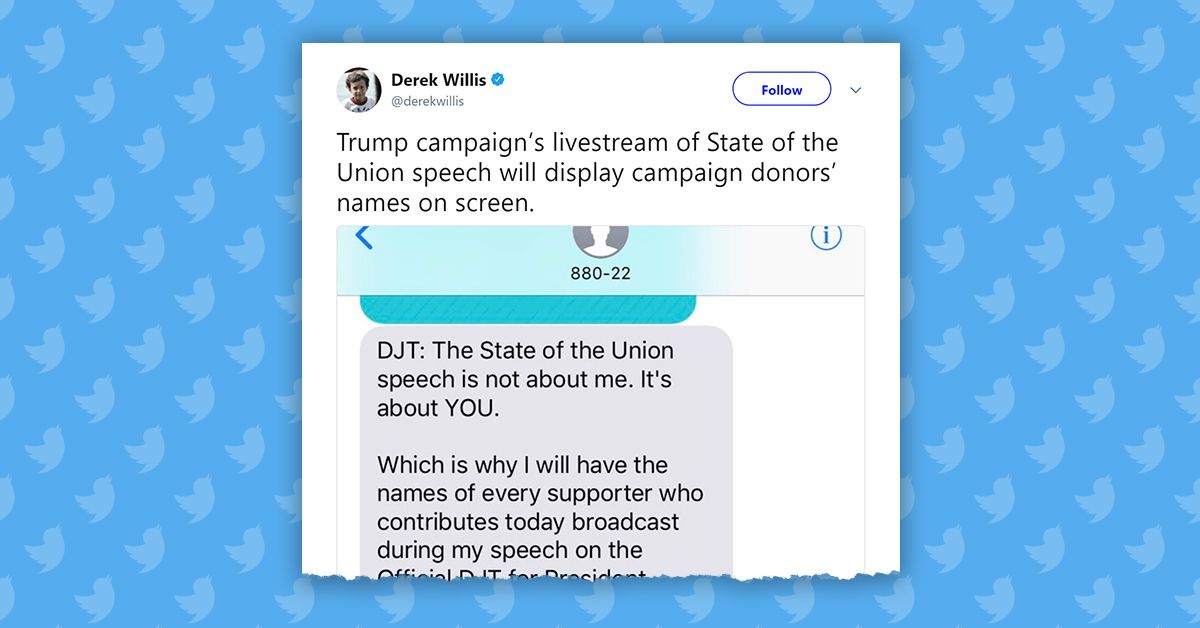 Claim:
President Trump offered that those who donated to his reelection could have their name displayed during a Trump campaign-run livestream of the State of the Union address
Rating:

In the afternoon hours of 29 January 2018, President Donald Trump sent a text message to his supporters telling them that if they donated to his re-election campaign that day, their names would appear on a livestreamed version of the State of the Union address hosted by his campaign website the following day:

DJT: The State of the Union speech is not about me. It’s about YOU. Which is why I will have the names of every supporter who contributes today broadcast during my speech on the Official DJT for President Livestream! Enough of the Fake News Media. It’s time for them to hear from the AMERICAN PEOPLE. Show how many Americans are dedicated to our movement! Contribute NOW and add your name to my Official List

The text message, which went viral on Twitter when ProPublica reporter Derek Willis tweeted a screenshot of the message, was legitimate. Clicking the link provided took the reader to a donation window on donaldjtrump.com, the official website of Trump's 2020 reelection campaign, for a “Your Name Displayed during the State of the Union” fundraiser.

An email reportedly sent by the Trump campaign a day ahead of the 2019 State of the Union address similarly offered to display the names of those individuals who donated $5 or more:

Trump is currently selling ad space in the #StateOfTheUnion address!

Yes, your name will appear “LIVE” during the State of the Union if you give him $5.

This is low point, even for this grifter trash. pic.twitter.com/qHyi3b8jg9

This was not the first time that Donald Trump had used the prospect of a fleeting glimpse of fame to raise money for his campaign. During the Republican National Convention in 2016, the Trump campaign offered a “Your Name on a Jumbotron” incentive, which allowed people who donate $50 or more to have their names displayed on the convention’s mega-displays.