Did Trump Criticize Obama for a Lack of Leadership During the 2013 Government Shutdown?

Who's most to blame for failing to "get everyone in a room" to "make a deal" when a government shutdown looms? 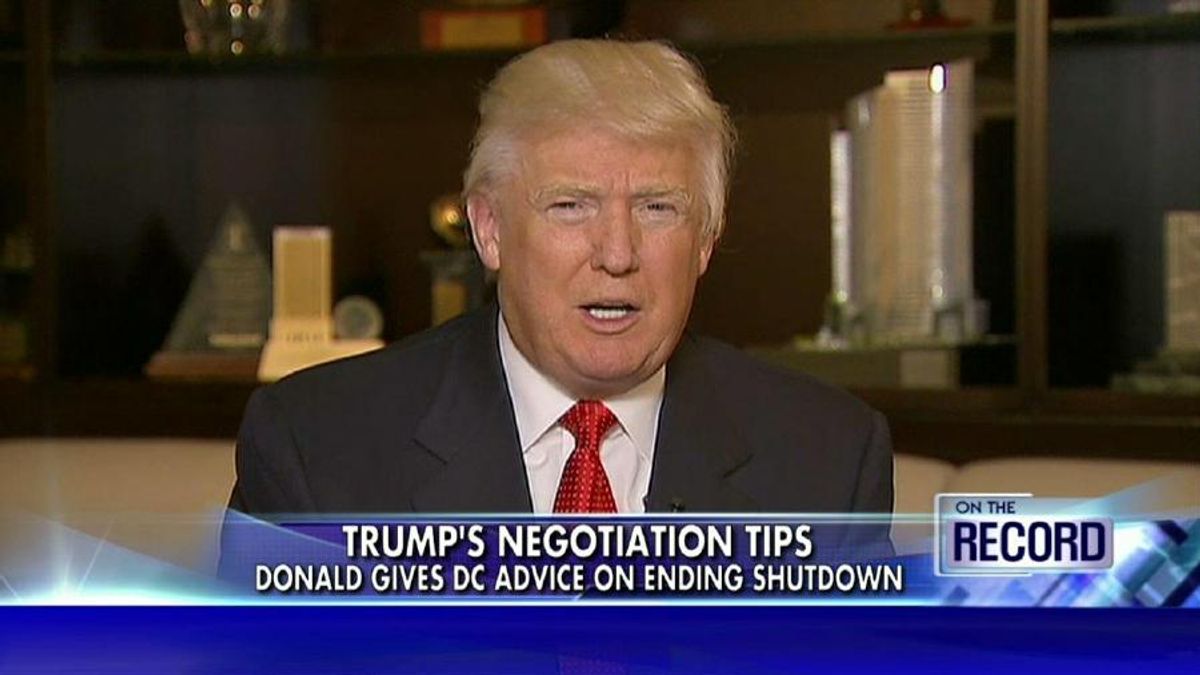 Claim:
Donald Trump criticized President Barack Obama during the 2013 government shutdown for failing to "lead," "get everyone in a room," and "make a deal."
Rating:

In October 2013, during the administration of President Barack Obama, the United States government underwent a budget impasse that led to a shutdown, resulting in most routine government operations being curtailed for the first seventeen days of the month. The shutdown occurred because neither legislation appropriating funds for fiscal year 2014 nor a continuing resolution for interim appropriations was approved in time, largely due to Republican attempts to tie government funding to resolutions delaying or defunding the Patient Protection and Affordable Care Act (commonly known as "Obamacare").

The U.S. government experienced another shutdown in January 2018, during the administration of President Donald Trump. Republicans blamed Democrats for creating the budget impasse by holding out on fixing the Deferred Action for Childhood Arrivals (DACA) program, while Democrats blamed Republicans for a failure to govern and President Trump for reneging on earlier agreements:

Ever since Trump announced in September that he would end the Obama-era Deferred Action for Childhood Arrivals program on March 5 unless Congress acted to extend it, Democrats in the House and Senate have been clamoring for a permanent legislative fix to protect the young immigrants known as Dreamers.

Prospects for a quick agreement brightened briefly in September after Trump appeared to sign off on a framework with Democratic leaders Nancy Pelosi and Charles Schumer; that plan would have traded the Dream Act for additional security at the border. But under pressure from immigration hard-liners, Trump backed away and added a whole new set of demands for a DACA deal, including funding for his border wall and significant changes to the legal immigration system.

Pelosi promised immigration activists that Democrats would not leave for the year without addressing DACA, but Senate Democrats agreed just before Christmas to punt the fight to January. With the funding deadline approaching and no immigration agreement in sight, Democrats in both the House and Senate decided to make a stand.

Democrats in turn blamed Republicans and Trump for a basic failure to govern, noting that this shutdown is the first in history to occur when a single party controls both chambers of Congress and the White House. And they blamed Trump for repeatedly backing out of agreements that would have resolved the dispute.

Donald Trump (then a private citizen) was highly critical of President Obama in over the 2013 government shutdown, and President Trump's critics gleefully turned the table on him in January 2018 by casting his own words back at him:

"A shutdown falls on the President's lack of leadership. He can't even control his party and get people together in a room. A shutdown means the President is weak."

We couldn't find an exact match for the words quoted above, which don't appear in any tweet posted by Donald Trump in 2013; they are more likely a paraphrase or summary of one or more comments Trump made during several television appearances in the latter part of 2013. For example, speaking by telephone to the hosts of Fox & Friends on 20 September 2013, Trump chided President Obama for failing to "get everybody in a room" and creating a "situation [that's] very embarrassing worldwide":

"Problems start from the top, and they have to get solved from the top, and the President's the leader, and he's got to get everybody in a room, and he's got to lead. And he doesn't do that, he doesn't like doing that, that's not his strength. And that's why you have this horrible situation going on in Washington. It's a very, very bad thing and it's very embarrassing worldwide."

And during an October 2013 interview with Fox News host Greta van Susteren, Trump again took President Obama to task for failing to be a "dealmaker":

#TBT to when Trump lectured President Obama about how to negotiate a deal to prevent a government shutdown, saying “the president has to lead.” “You have to get everybody in a room” to get a deal because it’s “good for the country.” pic.twitter.com/sdtcWRrWzz

And, of course, as Donald Trump noted in the immediate aftermath of the 2013 government shutdown:

Four and half years later, Donald Trump found himself on the receiving end of that sentiment, in spades:

Viebeck, Elise.   "Everything Trump Has Ever Tweeted About Government Shutdowns, in One Post."     The Washington Post.   25 August 2017.