Did Trump Say COVID-19 Deaths Wouldn't Hurt Anyone as Much as Himself?

During an ABC News interview, the president spoke about reopening the U.S. and what he'd say to those who lost loved ones to the coronavirus disease. 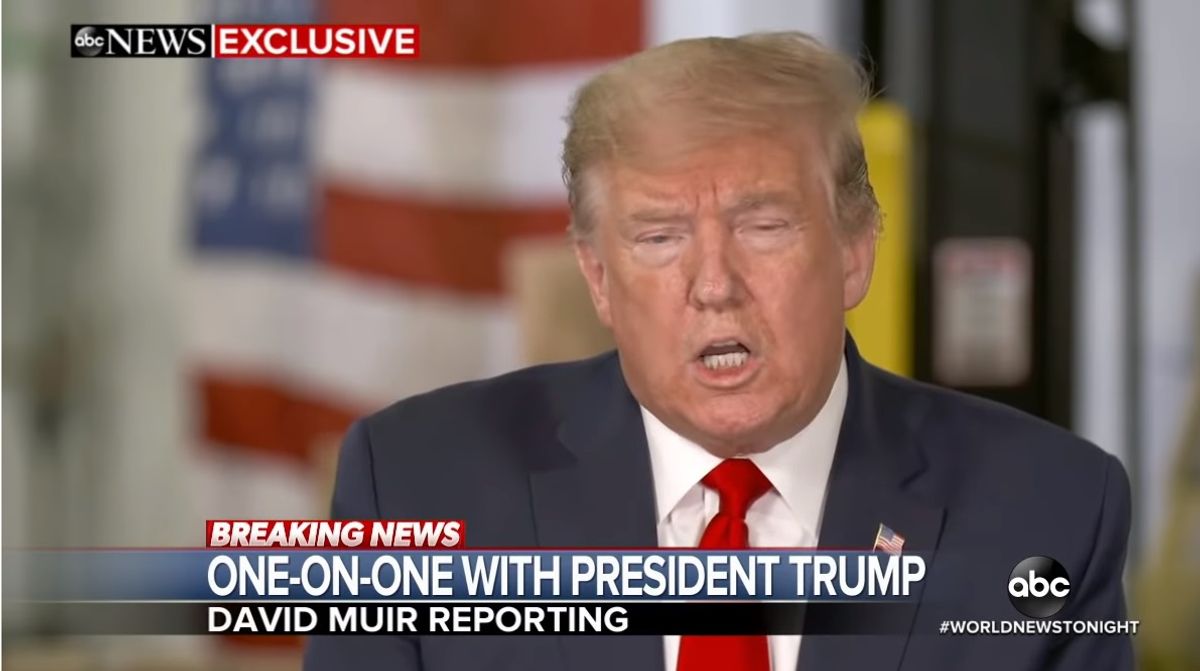 Claim:
When U.S. President Donald Trump was asked what he'd say to people who lost family members to COVID-19, he replied, "I would say this didn't hurt anyone as much as it hurt me."
Rating:

One of the primary issues that the U.S. federal and state governments were wrestling with during the COVID-19 coronavirus disease pandemic in May 2020 was the trade-off of keeping social distancing and business closure restrictions in place to protect lives, versus the trade-off of ongoing (and possibly permanent) economic harm to individuals, businesses, and the country as a whole.

On May 5, 2020, while U.S. President Donald Trump was in Phoenix, Arizona, to tour a medical face mask manufacturing facility there, he was interviewed by David Muir of ABC News about the subject of reopening the U.S.:

Shortly after the interview aired, a meme began to circulate on social media holding that when Trump had been asked during that interview what he'd say to people who lost family members to COVID-19, he replied, "I would say this didn't hurt anyone as much as it hurt me": Although this meme is vaguely reflective of something Trump said during that interview, it grossly misrepresents both what he literally said and what he meant.

According to the transcript of that interview, Trump was asked the following by Muir: "We've lost more people now [to COVID-19] than we lost in the Vietnam War. What do you want to say to those families tonight?" Trump responded in full as reproduced below:

I want to say: “I love you.” I want to say that we're doing everything we can. I also want to say that we're trying to project people over 60 years old. We're trying so hard and -- everything I've said today -- I'd like to preface it by saying, if you're 60 years old and especially if you're 60 or even less than that and you've had a heart condition or you've had diabetes or a problem of any kind -- it seeks out problems. This is a vicious -- it seeks out weakness, in terms of medical --

If somebody has any form of a heart problem or diabetes -- anything -- it seeks it out. It's a vicious, vicious virus. But I want to just say to the people that have lost family and have lost loved ones, and the people that have just suffered so badly, and just made it -- and just made it -- that we love you. We're with you. We're working with you. We're supplying vast amounts of money, like never before. We want that money to get to the people, and we want ‘em to get better.

And we want them -- you can never really come close to replacing, when you've lost some -- no matter how well we do next year, I think our economy is going to be raging. It's going to be so good. No matter how well, those people can never ever replace somebody they love. But we're going to have something that they're going to be very proud of. And to the people that have lost someone, there's nobody -- I don't sleep at night thinking about it. There's nobody that's taken it harder than me. But at the same time I have to get this enemy defeated. And that's what we're doing, David. That's what we're doing.

As indicated in the bolded passages above, Trump expressed sympathy for the families who had suffered and lost loved ones to COVID-19, said he "didn't sleep night at night thinking about it," and asserted that nobody had taken "it" (i.e., grappling with the effects of the pandemic) harder than himself. He perhaps undercut his message somewhat by mixing in the anguish of losing loved ones to disease ("those people can never ever replace somebody they love") with talk about recharging the economy ("I think our economy is going to be raging ... we're going to have something that they're going to be very proud of"), but he did not say anything that could reasonably be interpreted as meaning that coronavirus related deaths "didn't hurt anyone as much as it hurt me."