Will Trump’s Presidency End on the Day of a Comet, Meteor Shower, and Total Eclipse?

It is unlikely that U.S. viewers will be able to capture a glimpse of all three sky events. 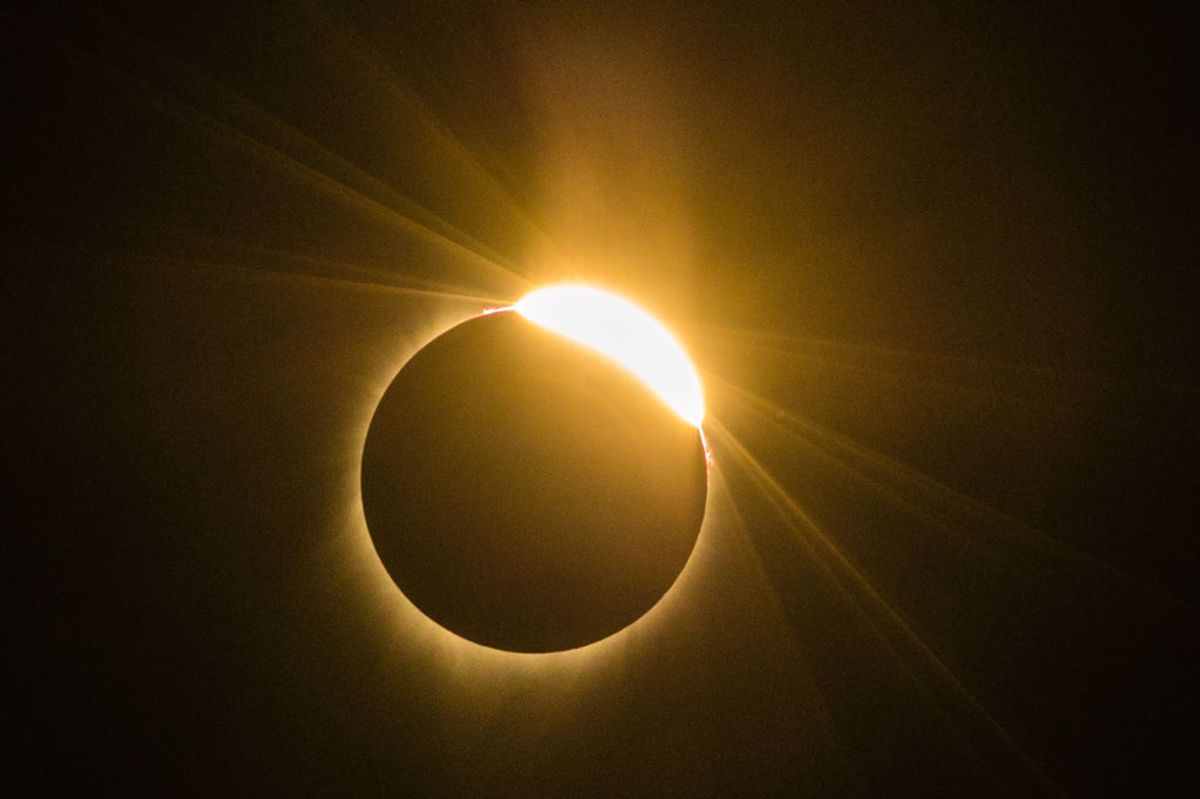 Claim:
The current term of U.S. President Donald Trump will end when the Electoral College votes on Dec. 14, 2020, a day marked in some parts of the world that coincided with a comet, meteor shower, and total eclipse of the sun.
Rating:

A comet, meteor shower, and total eclipse of the sun will occur in some parts of the world on Dec. 14, 2020, which coincides with the day that Joe Biden is expected to be confirmed as the U.S. president-elect by the Electoral College.

Dec. 14 does not officially mark the transition of power from U.S. President Donald Trump to President-elect Biden.

As electors in all 50 U.S. states and the District of Columbia vote to formally certify Joe Biden as the next president of the United States, a number of celestial events are expected to occur in skies around the world.

In particular, it was reported in Forbes that U.S. President Donald Trump’s first and only term was expected to end on the same day that a comet, a meteor shower and a total eclipse of the sun would occur. The idea took off on the internet when social media users on both sides of the political aisle made jabs at the serendipitous timing.

While there is some truth to this claim, there are important nuances worth noting. Namely, Trump’s presidency does not technically end on Dec. 14, 2020. And while these sky events are expected to coincide with the electoral college vote in parts of the world, it is unlikely that U.S. viewers will be able to capture a glimpse of all three.

The Transfer of Power From Trump to Biden

According to a report compiled by the National Archives and Records Administration (NARA) outlining the 2020 presidential election and its requirements under the U.S. Constitution and Code, Dec. 14 does not officially mark the transition of power from Trump to Biden.

Rather, Dec. 14 marks the day electors will hold meetings in their respective states to vote for the president and vice president, after which they will seal Certificates of Votes to the Office of the Federal Register and Congress. Following the electoral vote on Dec. 14, the governors of each state are required to certify the election results and send them to Congress, with a deadline of Dec. 23.

On Jan. 6, 2021, Congress will meet to count the electoral votes — a winner must have at least 270 — and officially announce the newly elected president and vice president of the United States.

The Forbes article referred to the Dec. 14 sky events as “rare,” which is only partly true. With an annual peak in mid-December, the Geminids meteor shower is considered one of the best and most reliable such displays, according to NASA. In 2020, the Geminids are active between Dec. 4 and 17 with an estimated 120 meteors seen each hour under perfect conditions. Because these showers are visible around the planet, skygazers can expect to see their bright, yellowish colors dashing through the sky beginning around 9 or 10 p.m. local time and lasting until dawn.

A second event mentioned in the article is the appearance of Comet C/2020 S3, also known as Erasmus, a comet discovered by astronomer Nicolas Erasmus in September 2020. Erasmus had a high elevation from mid-October to mid-November, which would have been the best time to view the comet. However, it lost elevation into mid-December, making it difficult to see, according to the space and astronomy news site Universe Today. The comet does reach its closest point to the sun on Dec. 14, a phenomenon known as perihelion, and is considered visible around the world until the early morning hours of Dec. 15. So, while there is a chance that sky-watchers might catch a glimpse of Erasmus, those chances are slim.

Finally, the last solar eclipse of 2020 does, in fact, occur on Dec. 14, but it is only visible in its entirety in select parts of Chile and Argentina in the afternoon. Partial phases can also be seen in parts of southern South America, southwestern Africa, and Antarctica — weather permitting.

A solar eclipse happens during the daytime and takes place when the moon passes directly between the sun and Earth, blocking the light of the sun. Solar eclipses are relatively uncommon, but they’re not rare. According to NASA, a solar eclipse occurs once every 18 months in a specific region and lasts for just a few minutes. The next total solar eclipse will occur on Dec. 4, 2021, but you’ll have to travel to Antarctica to view it.