Did a Billboard in Missouri Show President Trump Alongside a Gospel Quote?

Some Christians expressed concern that a billboard near St. Louis seemingly equated the 45th president with Jesus Christ himself. 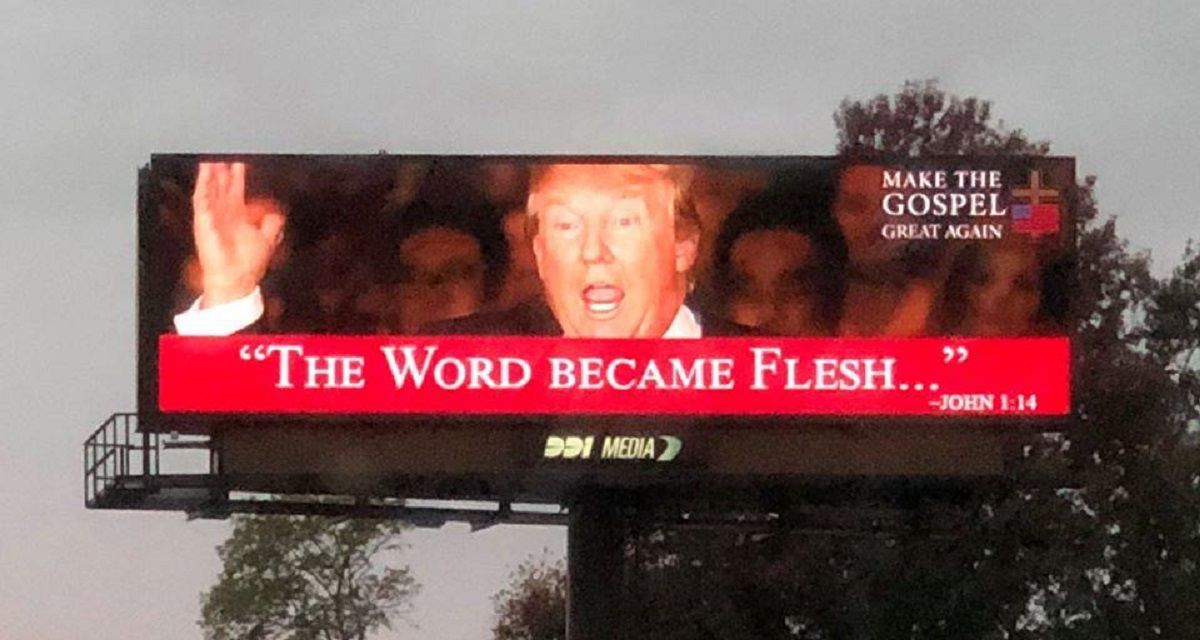 Claim:
A billboard along route I-170 near St. Louis, Missouri showed President Donald Trump alongside an excerpt from a well-known Gospel verse.
Rating:

In the final days before the November 2018 elections, social media users in Missouri began posting descriptions and photographs of a billboard that appeared to show President Donald Trump's face accompanied by an excerpt from a well-known Bible verse and a re-working of his 2016 presidential campaign slogan "Make America Great Again":

From a friend -- a billboard spotted outside of St Louis. I don't like using the word "heresy," but I think I'll make an exception in this case. pic.twitter.com/FqaPnBXGHT

The images prompted expressions of concern by some Christians that the billboard was associating or likening President Trump to Jesus Christ himself, the "Word made flesh" referenced in the Gospel quotation. In its proper context, Chapter 1, Verse 14 of the Gospel of John reads:

He came unto his own, and his own received him not.

But as many as received him, to them gave he power to become the sons of God, even to them that believe on his name:

And the Word was made flesh, and dwelt among us, (and we beheld his glory, the glory as of the only begotten of the Father,) full of grace and truth.

John bare witness of him, and cried, saying, This was he of whom I spake, He that cometh after me is preferred before me: for he was before me.

And of his fulness have all we received, and grace for grace. For the law was given by Moses, but grace and truth came by Jesus Christ.

The billboard is real, and the photographs of it shared on social media in early November are authentic. The existence of the billboard was verified by St. Louis television station KMOV, which published their own photograph of it, describing the location as being "on Interstate 170 near St. Charles Rock Road," which is around 15 miles north-west of downtown St. Louis, Missouri:

This corroborates the description in Martha Baker's 3 November Facebook post, which stated that the billboard was located "on I-170 (the Innerbelt in St. Louis) between the Rock Road and Page Blvd."

Three days before Baker's post, another social media user posted their description of the billboard, expressing their dismay at what they called its "idolatry":

This is not a drill. In #STL I just saw a billboard with Trump on it that says, “The word made flesh.” And “Make the gospel great again.” I cannot begin to express how livid I am at this level of idolatry.

The billboard is undoubtedly real, though it is not yet clear who paid for it and when it was erected. A spokesperson for DDI Media, the St. Louis company which owns the billboard itself, told us they could not share such information.

On 5 November, a Facebook page called "Make the Gospel Great Again" (which is no longer available on the social networking web site) claimed responsibility for the billboard:

...We met as a team last night to discuss how much hatred we’ve received for our efforts to encourage fellow believers in holding fast to the faith. We prayed that the facebook page would be a community for fellow Christians to be encouraged at what God is doing in the world and to find out how they could, like our president, be a part of being God’s presence in making America great. But the hateful comments and mean spiritedness from liberals and atheists drowned out the voices of Christians in this country. These reflect the level of unfair deranged media attacks on the President in general and his supporters.

Our billboard IS NOT equating Jesus with President Donald Trump. Salvation comes only from a personal relationship with Jesus Christ, not any man. But God does send his messengers to us, and just as King David liberated the faithful in his day, President Trump is doing this today through his protection of the unborn, defense of our land against foreign invaders and standing up for Israel...

The page described its mission statement as follows: "We believe God has given American Christians His earthly messenger - Donald J Trump. We follow his words in faith each day!"

As far back as 10 October, "Make the Gospel Great Again" posted an image which was almost identical to that ultimately displayed on the St. Louis billboard, and its profile photograph was the same logo which appeared on the billboard (a crucifix with an American flag):

We sent a list of questions to an email address associated with the "Make the Gospel Great Again" Facebook page, in order to clarify who was behind it, and verify whether there was a link between it and the St. Louis billboard, but we did not receive any response.