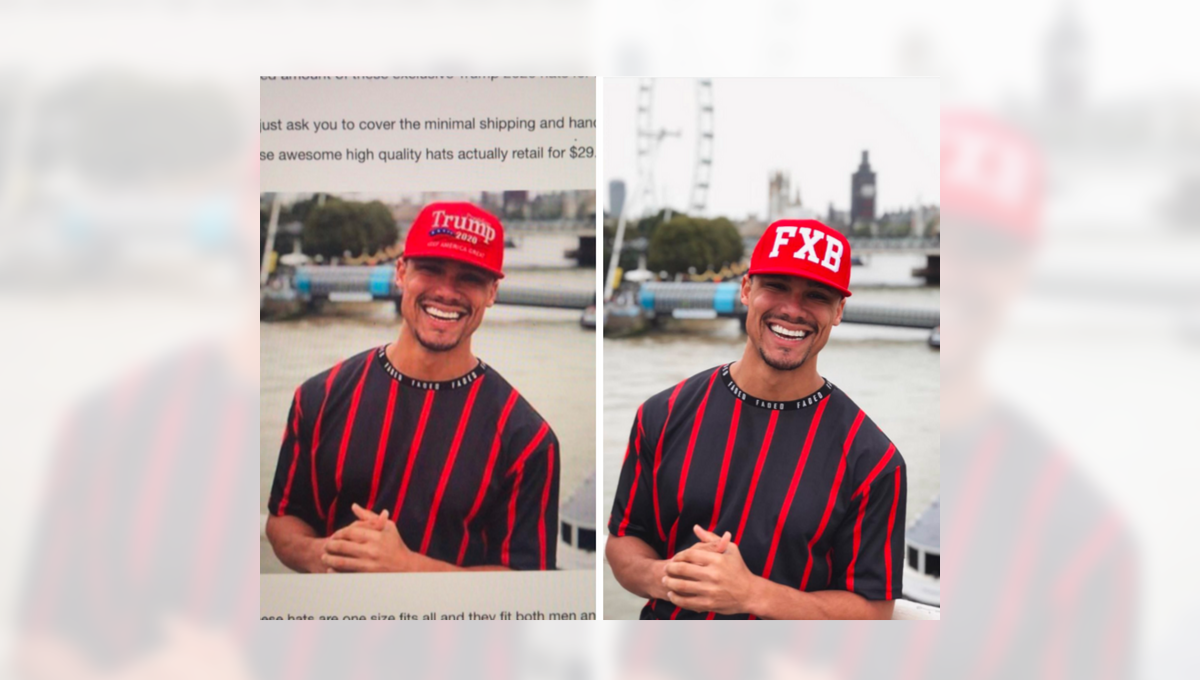 Claim:
The Trump campaign digitally altered a photograph of reality TV star Rykard Jenkins to make it appear as if he were wearing a "2020 Trump" hat.
Rating:

On Sept. 13, 2019, Rykard Jenkins, a former contestant on the reality TV show "Love Island," posted a tweet showing a photograph of him had been altered to show him wearing a hat promoting U.S. President Donald Trump's 2020 reelection:

Woke up this morning to know I’m the new face for the 2020 @realDonaldTrump campaign ?? ? pic.twitter.com/gl5SqPxKsj

While Jenkins' image was truly altered to promote a piece of Trump merchandise, this tweet, as well as subsequent news coverage, led some social media users to believe that the official Trump campaign was responsible for creating this doctored image:

The Trump campaign photoshopping a MAGA hat on a photo taken in London of a PoC British national and trying to pass it off as, "see, black people in America love Trump!" is simply *chef kiss*.

As far as we can tell, the Trump campaign had nothing to do with this fake photograph.

We could not find the doctored image of Jenkins on the official website for Trump 2020 merchandise or an any of its affiliated social media accounts.

The doctored image of Jenkins in a 2020 hat appears to have originated with an advertisement on the website Conservative News Daily. It's unclear who is behind this website because it offers no contact information, but no evidence exists to indicate this site is owned or operated by Trump's official 2020 presidential campaign. Furthermore, the pictured hat doesn't appear to be a piece of official Trump merchandise. In other words, it seems that a third party doctored a photograph of a reality TV star in order to promote an unofficial piece of Trump memorabilia.

A Trump campaign official told us: "We have nothing to do with the site and the hat is fake. We are preparing to take the usual legal action."

The original photograph of Jenkins, which featured an "FXB" hat, was posted to his Instagram account in September 2018:

Even though the sky’s are grey there ain’t no town like London Town ?? • • • Wearing London’s own @foxberryboys Snapback, absolutely love these caps, make sure you check them out. #wearefoxberryboys

At least one other doctored photograph appeared on the Conservative News Daily advertisement for this unofficial Trump 2020 hat: