Did a Trump Campaign Ad Use a Photo from Ukraine of Protesters Hitting Police?

The United States is not the only country that has seen violent clashes between police and protesters. 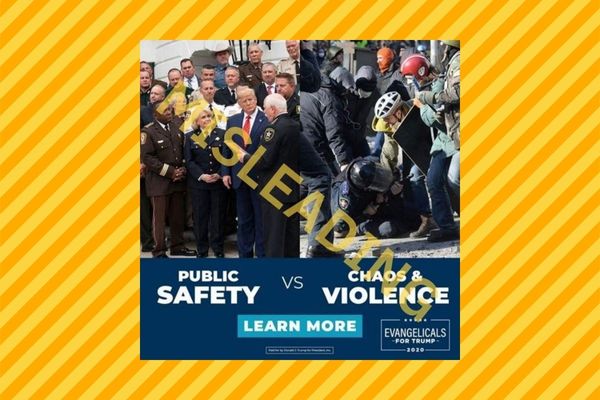 Claim:
A campaign advertisement on U.S. President Donald Trump's official Facebook account presented an old photograph from Ukraine as if it showed violence against police officers in the United States.
Rating: Shortly after this ad started running, media outlets such as the BBC noticed that the image on the right was not taken in 2020, and that it didn't show an incident from the United States. This image was actually taken in 2014, and shows a clash between police and protesters in Ukraine.

The advert shows one image of Mr Trump in a calm setting talking to police officers beside another of a security official being surrounded by protesters, saying: "Public safety vs chaos and violence".

However, the image is a photo from a pro-democracy protest in Ukraine in 2014.

This photograph was taken by photographer Mstyslav Chernov in February 2014 during a protest in Kyiv, Ukraine. The image is available via Wikipedia under a "Creative Commons" license. The terms for this photograph state that it is free to use — as long as the photographer is given proper credit. But the advertisement on Trump's Facebook page offered no mention of the photographer. Chernov confirmed to Business Insider that the Trump ad did indeed use his photograph from Ukraine in 2014. Chernov went on to say that the only way to combat this sort of deception is through "education and media literacy."

"Photography has always been used to manipulate public opinion. And with the rise of social media and the rise of populism, this is happening even more," he said.

"The only way to combat this is through education and media literacy. When people learn to independently distinguish truth from lies, then the number of manipulations will decrease."