Is This Photo of Trump, Bloomberg, Clinton, and Giuliani Real?

Some viewers had trouble picturing these politicians golfing together. 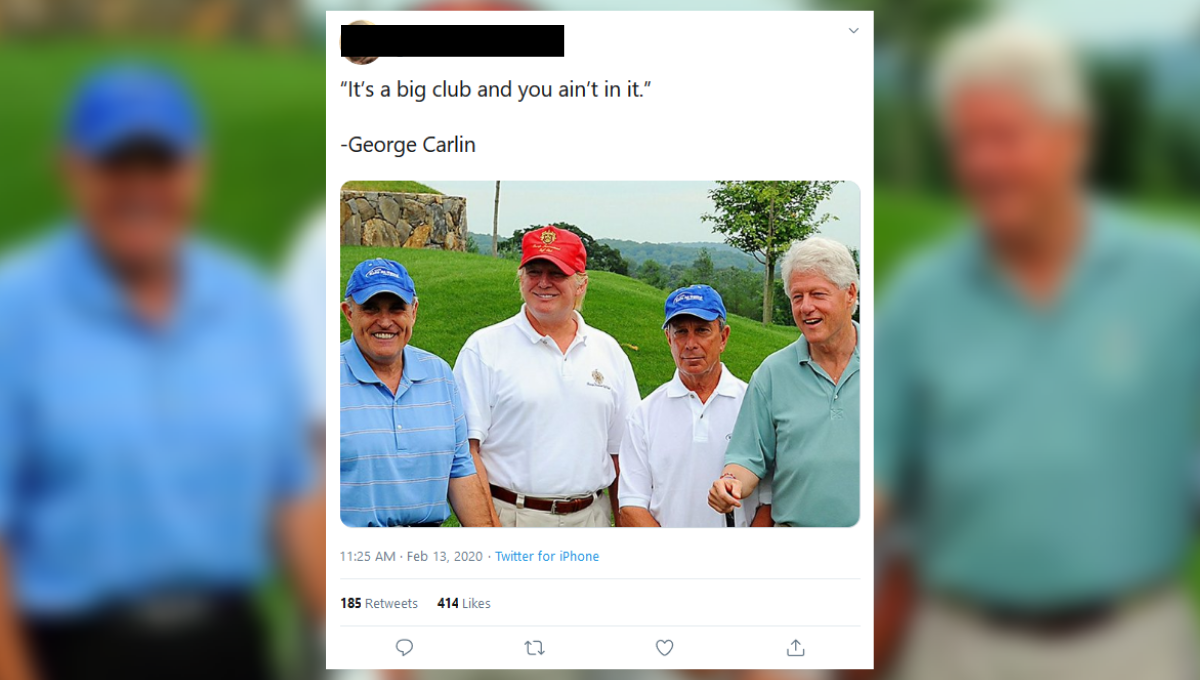 At the time of this writing, Donald Trump is President of the United States, former Mayor Michael Bloomberg is a 2020 Democratic presidential candidate, former Mayor and Trump attorney Rudy Giuliani is embroiled in a scandal that led to Trump's impeachment, and former President Bill Clinton is married to one of Trump's chief political foes, former Secretary of State Hillary Clinton. Knowing all that, it would seem odd to see these four men golfing together in 2020.

And yet, a photograph supposedly showing Trump, Bloomberg, Giuliani, and Bill Clinton on the golf course circulated widely on social media attached to a quote from comedian George Carlin: "It's a big club, and you ain't in it." This is a genuine (and cropped) photograph of Trump, Giuliani, Bloomberg, and Clinton on the golf course. It was taken in 2008 at the Trump National Golf Club in Briarcliff Manor, New York, during the Joe Torre Safe at Home Foundation Golf Classic. The uncropped photograph, which was taken by Sabo Robert and is available via Getty Images, also pictured comedian Billy Crystal and former baseball manager Joe Torre.

Trump and Bloomberg also golfed together at this event in 2007. Some viewers had trouble picturing Trump, a future Republican president, golfing with high-profile Democrats like Clinton and Bloomberg. Others viewed this image in the context of Carlin's quote and interpreted the photograph as proof that the lines between the leading U.S. political parties aren't as distinct as they appear to be.

While there are certainly differences between Republicans and Democrats, we'll note that Trump, Giuliani, and Bloomberg have all switched parties at least once in their careers. This isn't entirely uncommon, however, especially when one's political career spans decades.

The viral photograph truly shows Trump, Bloomberg, Clinton and Giuliani golfing together at an event in 2008. Whether or not the photograph shows the "big club" that you "ain't in" is up to the viewer to decide. Here's a segment of the Carlin routine from which the quote originated: