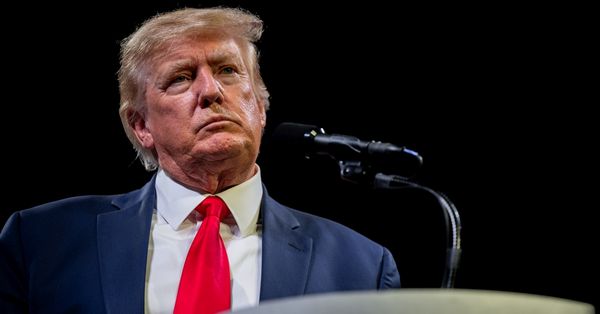 Claim:
On June 14, 2022, Donald Trump marked his birthday with a statement in which he attacked Liz Cheney, made a lewd remark about his wife Melania, and asked for donations.
Rating:

In June 2022, internet users, especially those opposed to former Pres. Donald Trump, enthusiastically shared what appeared to be a statement in which he marked the occasion of his 76th birthday by attacking Republican Congresswoman Liz Cheney, making a lewd remark about his wife, Melania, and soliciting donations from his supporters.

In reality, the statement was fabricated by a left-wing political action committee which routinely produces what it describes as political satire. We are issuing a rating of "Misattributed."

On Twitter, @StandForBetter posted the statement on June 14, Trump's birthday, along with the caption:

Happy #FlagDay everyone! Looks like Donald J. Trump is looking for people to send money. Instead, maybe we can say Happy Birthday President Trump by sending an arrest warrant instead. The 100 GOP that support his big lie can bail him out of this spoof. From #UKR The bogus statement was re-shared elsewhere on social media, without the name of its original source. This is important because Stand For Better is a left-wing political action committee that regularly publishes what its creators describe as "political films and satire supporting Dems."

Without that contextual information, social media users were more likely to share the statement as authentic.

The "birthday" statement never appeared on any of those platforms on or around June 14, and we could therefore conclude it was not authentic, even if we weren't aware of the overtly political and "satirical" motivations of Stand for Better.

“Did Trump Call Pence ‘a Dog That Belongs on the Street’?” Snopes.Com, https://www.snopes.com/fact-check/trump-pence-dog-pet/. Accessed 16 June 2022.