Did Trump Brag About Crowd Sizes While Past Presidents Consoled Massacre Victims? 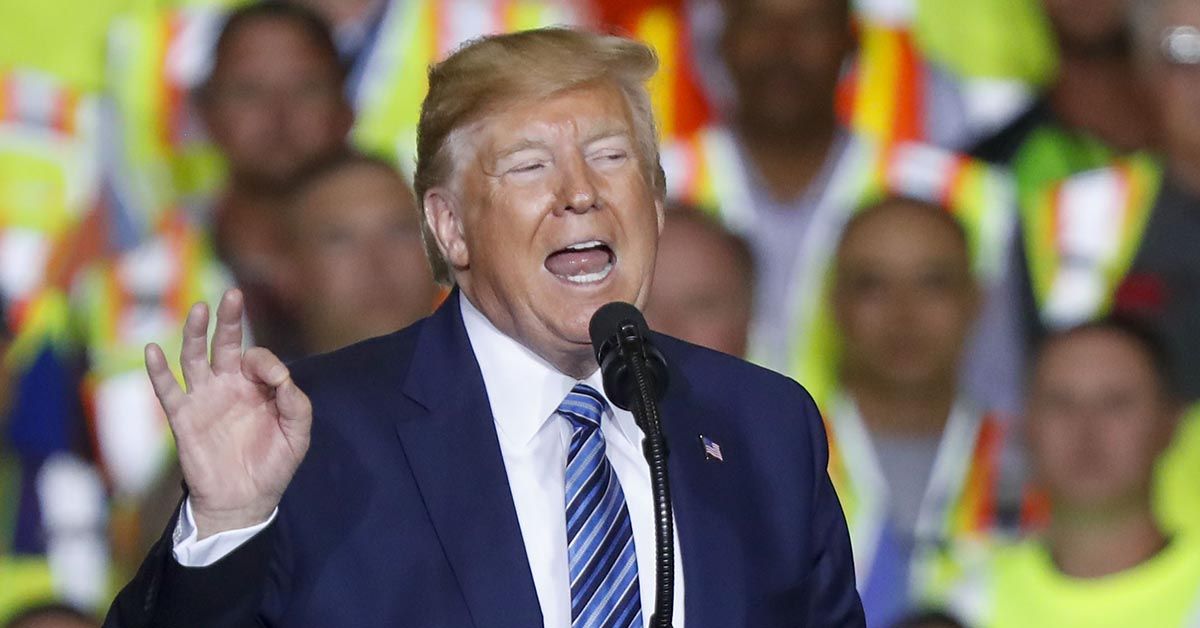 Claim:
In the aftermath of two mass shootings, President Donald Trump attacked a political opponent and bragged about crowd sizes during remarks about the incidents, whereas past presidents offered words of comfort and solidarity.
Rating:

The quotations in an Occupy Democrats meme were authentic and presented with a high degree of accuracy.

The remarks attributed to former Presidents Obama, Bush and Clinton came from prepared speeches, while those attributed to Trump were cherry-picked from an off-the-cuff moment and failed to reflect the full extent of his remarks on two shooting massacres in August 2019, which included a speech that did contain sentiments of comfort and solidarity for victims.

In the aftermath of a spate of mass shootings in August 2019, attention turned to U.S. President Donald Trump's tone in discussing the killings, and the wider issue of gun violence in the United States, as well as his comportment in visiting two of the cities affected, El Paso, Texas, and Dayton, Ohio.

Trump was criticized for smiling and offering a thumbs-up gesture while visiting an infant whose parents had been shot to death in a massacre in El Paso, and allegations that the president was using the tragedies as an opportunity to gain political capital extended to unfounded rumors that his administration had hired "fake" medical staff to pose with him at a hospital in Dayton.

On Aug. 9, the left-leaning Facebook page Occupy Democrats posted a meme that purported to highlight a stark difference in tone and decorum between Trump — who supposedly used a visit to El Paso to brag about crowd sizes and snipe at Democratic presidential candidate and former Congressman Beto O'Rourke — and his predecessors in the Oval Office — who purportedly offered words of comfort and solidarity in the aftermath of previous mass shootings.

We received multiple inquires from readers about the accuracy of the meme, which read as follows:

"Littleton, I can only say tonight that the prayers of the American people are with you." — Bill Clinton, after Columbine.

"This is a day of mourning for the Virginia Tech community — and it is a day of sadness for our entire nation." — George H.W. [sic] Bush.

"Here in Newtown, I come to offer the love and prayers of a nation. You are not alone." — Barack Obama.

"Crazy Beto only had like 400 people in a parking lot, they said his crowd was wonderful." — Deplorable Trump, in El Paso.

The caption of the meme read: "SERIOUSLY, what is WRONG with Trump?!?! He REALLY said this to the El Paso victims."

The Occupy Democrats meme was a largely accurate recounting of four post-shooting statements made by the four most recent occupants of the White House. (Strictly speaking, Trump was addressing medical staff who had treated victims of the El Paso shooting, rather than the victims themselves, and the second quotation was, apparently in error, attributed to George H.W. Bush, rather than George W. Bush.)

Despite the authenticity of the quotations, the meme presented an incomplete and rather misleading picture of Trump's overall comportment in visiting El Paso after the August 2019 massacre there. While the president did indulge in side-sniping about a political opponent who had been fiercely critical of him (something his predecessors markedly did not do in similar circumstances), Trump did also offer words of solidarity and comfort to the victims of the August 2019 massacres, their families, and the wider communities affected by the shootings.

The first quotation in the meme was taken from remarks Bill Clinton delivered in a White House press conference on April 20, 1999, the day of the Columbine High School massacre in Littleton, Colorado. His speech can be read in full here, and viewed in full in the video below.

In the most relevant section, Clinton said:

The second quotation in the meme came from a speech that George W. Bush gave on April 17, 2007, during a convocation at Virginia Tech in Blacksburg, Virginia, the day after a student shot to death 32 people on that campus. The full text of his speech is available here, and it can be watched in full below.

In the section quoted by Occupy Democrats, Bush said:

"Laura and I have come to Blacksburg today with hearts full of sorrow. This is a day of mourning for the Virginia Tech community, and it is a day of sadness for our entire nation. We've come to express our sympathy. In this time of anguish, I hope you know that people all over this country are thinking about you and asking God to provide comfort for all who have been affected."

The third quotation in the meme was taken from a speech Barack Obama gave during an interfaith vigil at Newtown High School on Dec. 16, 2012 — two days after a shooting massacre at nearby Sandy Hook Elementary School in Connecticut.

The speech can be read in full here, and watched in full in the video below. During the relevant section, Obama said:

"Here in Newtown, I come to offer the love and prayers of a nation. I am very mindful that mere words cannot match the depths of your sorrow, nor can they heal your wounded hearts. I can only hope it helps for you to know that you're not alone in your grief. That our world, too, has been torn apart. That all across this land of ours, we have wept with you, and we've pulled our children tight. And you must know that whatever measure of comfort we can provide, we will provide. Whatever portion of sadness that we can share with you, to ease this heavy load, we will gladly bear it. Newtown, you are not alone."

The fourth and final quotation in the meme consisted of remarks Trump made while talking to hospital staff during a visit to University Medical Center in El Paso on Aug. 7, 2019, four days after a mass shooting at a Walmart store in that city.

Police in El Paso have linked the suspected shooter, Patrick Crusius, to a white nationalist manifesto posted online shortly before the massacre began. The author of the manifesto decried what he characterized as a "Hispanic invasion of Texas" and espoused the discredited "white genocide" theory.

Although the manifesto's author, thought by El Paso police to be the suspected Walmart shooter, stipulated that his anti-immigrant sentiment predated the elevation of Trump to the presidency, some observers have pointed out areas of overlap between how the president talks about immigration and immigrants, and how the manifesto addressed them.

Others, including Democratic politicians and long-standing critics of the president, went further in connecting Trump to the manifesto and the El Paso shooting. U.S. Rep. Joaquin Castro (D-Texas) said the manifesto was so similar to Trump's rhetoric that it "could have been written by the people that write Trump's speeches." O'Rourke described the massacre as "an act of terror inspired by [Trump's] racism."

Conventional news media were not permitted to accompany the president and first lady Melania Trump on their visits with shooting victims, families and medical staff in Dayton and El Paso on Aug. 7, but amateur footage emerged later that showed Trump addressing medical professionals at University Medical Center in El Paso.

In the short clip, the president commended the work done by hospital staff in caring for the victims of the shooting, saying "the job you've done is incredible," and "it's an honor to be with you." Without any obvious reason or prompt, Trump then shifted to talking about a rally he had held in El Paso in February 2019 (although he mentioned "three months ago," Trump's most recent rally in the city was in February, six months earlier):

"I was here three months ago and we made a speech and we had a — what was the name of the arena? — that place was packed ... That was some crowd, and we had twice the number outside. And then you had this crazy Beto — Beto had like 400 people in a parking lot, they said, 'His crowd was wonderful!' ..."

This is viewer video of President @realDonaldTrump and @FLOTUS at @umcelpaso meeting with victims and medical staff. Send us any photos/videos of president Trump's visit to #ElPaso and we may show it on TV. Upload here: https://t.co/UHa4MdGOH4 pic.twitter.com/DD5otJtYEg

Trump was referring in those remarks to a counter-protest held in response to his Feb. 11 rally at the El Paso County Coliseum. The counter-protest was led by O'Rourke and was estimated to have had between 7,000 and 15,000 attendees — considerably more than the "400 people in a parking lot" claimed by Trump.

During his rally, Trump thanked the El Paso fire department for allowing 10,000 of his supporters to enter the arena, despite the venue's having a capacity of 6,500. In response, a spokesperson for the fire department corrected the president, insisting that no special permission had been given, and the number of attendees inside the arena was no greater than its capacity. At other times, Trump claimed that as many as 35,000 supporters had come to the rally, taking into account those outside the arena.

For an unknown reason, Trump decided to re-open that six-month-old dispute and grievance over crowd sizes and news coverage, while meeting and praising hospital staff who had treated and cared for the victims of a mass shooting. That struck some observers as grossly inappropriate, and we found no record of former Presidents Obama, Clinton or Bush having engaged in similar behavior while meeting the victims of past shootings or the medical professionals who had treated them.

However, Trump's "crazy Beto" aside was not the extent of his remarks on the massacres in Dayton and El Paso, and the Occupy Democrats meme misled readers by cherry-picking that unscripted moment and comparing it with remarks made by previous presidents from behind a podium, during prepared speeches.

In a White House address on Aug. 5, Trump offered sentiments of solidarity and comfort to the victims of the Dayton and El Paso shootings and their families:

"The First Lady and I join all Americans in praying and grieving for the victims, their families, and the survivors. We will stand by their side forever. We will never forget. These barbaric slaughters are an assault upon our communities, an attack upon our nation, and a crime against all of humanity. We are outraged and sickened by this monstrous evil — the cruelty, the hatred, the malice, the bloodshed, the terror. Our hearts are shattered for every family whose parents, children, husbands and wives were ripped from their arms and their lives. America weeps for the fallen.

"We are a loving nation, and our children are entitled to grow up in a just, peaceful and loving society. Together, we lock arms to shoulder the grief. We ask God in heaven to ease the anguish of those who suffer, and we vow to act with urgent resolve."

The salient difference between Trump and his three most recent predecessors was not that they gave "presidential" speeches after mass shootings, because Trump, too, gave a relatively dignified speech from the White House. The key difference, in the context of the Occupy Democrats meme, was in Trump's comportment and behavior when he stepped away from the podium. We therefore rate the truth of this meme as "Mixture."