Did President Trump Tell Belgium to 'Withdraw from the Climate Agreement'? 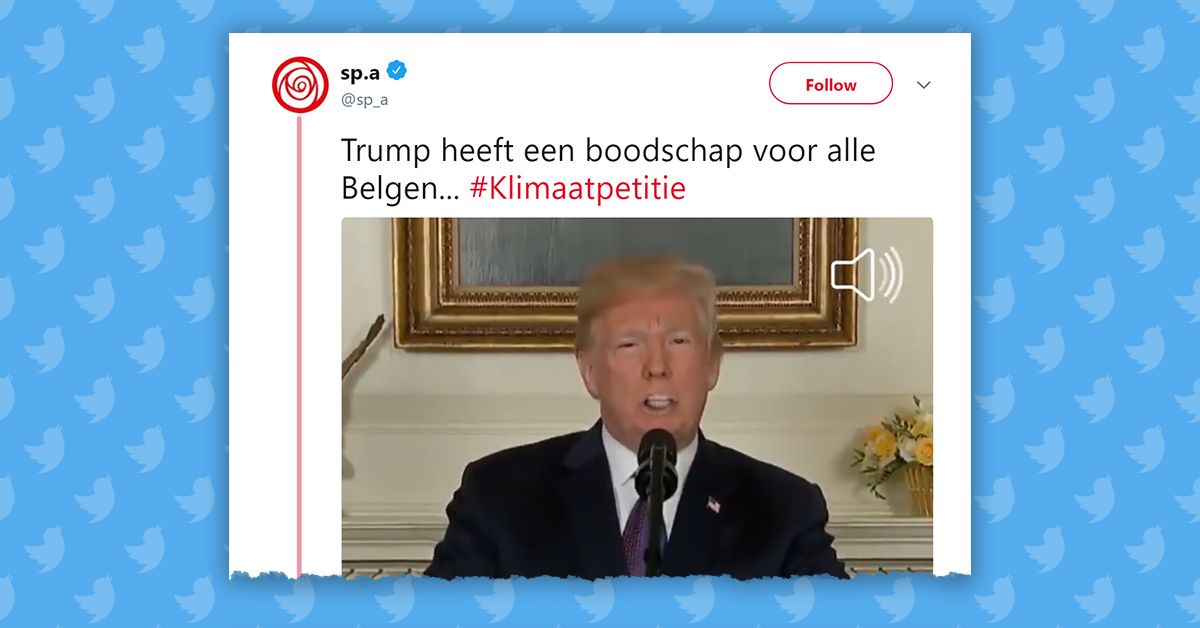 In May 2018 the Belgian group Socialistische Partij Anders (sp.a for short, or "Socialist Party Differently" in English) released a video seemingly "enlisting" U.S. President Donald Trump to speak to its compatriots regarding climate change.

The video, posted on Twitter, showed the U.S. president standing at a lectern and appeared to begin with his saying, "This is a huge deal":

It was apparent right away, however, that neither the voice nor the lip movements in the video belonged to Trump -- they were added to the president's head in a technique that fans of late-night TV talk show host Conan O'Brien have seen employed by him (and other similar shows) in the past:

The putative message from President Trump in the video exhorted Belgians as follows:

As you know, I had the balls to withdraw from the Paris Climate Agreement, and so should you. Because what you guys are doing right now in Belgium is actually worse. You agreed, but you are not taking any measures, only bla bla bla bing bang boom. You even pollute more than before the agreement. Shame! Total shame! At least I am a fair person. People love me because I am a fair person. I'm the fairest person on Earth. So Belgium, don't be a hypocrite: withdraw from the Climate Agreement.

However, the last line of the video ("We all know that climate change is fake, just like this video") was not subtitled for Belgian viewers. Instead, they were directed to visit the party's website and sign a petition calling on the Belgian parliament to "invest fully in public transport, part-cars and electric mobility," as well as "healthy, sustainable and locally produced meals." The petition also called for the closing of the Doel nuclear power station as part of a transition to "renewable, climate-friendly" energy use.

Sarah Vandecruys, a spokesperson for sp.a, confirmed that the party used "deep fake" technology to put the video together: "We have commissioned a professional studio to create this video, and we have checked with them that this is legally sound," she said.

Use of "lip-synching" technology caused concern after a group of researchers at the University of Washington posted footage in July 2017 that mixed material from various speeches by former President Barack Obama by converting audio into "basic mouth shapes," making it difficult to determine whether the remarks were authentically voiced by him.

On 8 April 2017, the Belgian government ratified the Paris Climate Change Agreement, in which the 195 signatory countries agreed to work toward reducing greenhouse gas emissions. Less than two months later, President Trump announced that the U.S. would pull out of the agreement.