A meme summarized Nazi beliefs about Jewish people but drew a less accurate link to President Trump's comments about immigrants. 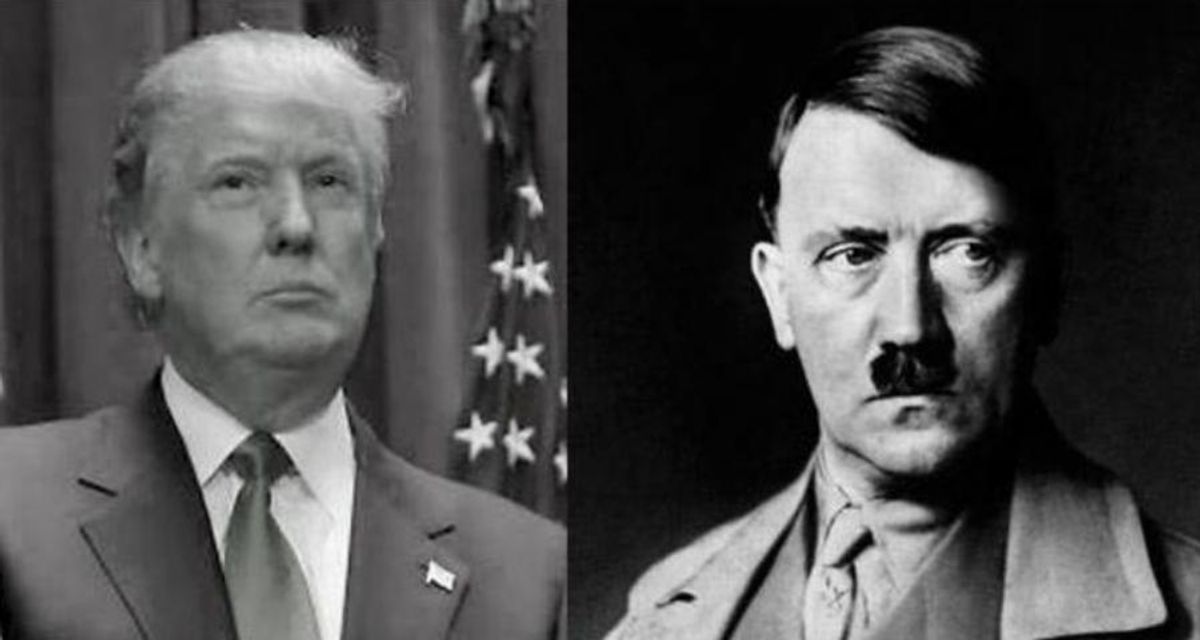 Neither of the quotes offered in a popular meme featuring Hitler and Trump was a literal one, and Trump's quote more specifically described MS-13 gang members as "animals."

On 16 May 2018, U.S. President Donald Trump provoked controversy in the course of a public round-table discussion about immigration, crime, and sanctuary cities when he reportedly said (in reference to immigrants), "You wouldn't believe how bad these people are. These aren't people, these are animals":

We have people coming into the country, or trying to come in — we're stopping a lot of them — but we're taking people out of the country, you wouldn't believe how bad these people are. These aren't people, these are animals. And we're taking them out of the country at a level and at a rate that's never happened before. And because of the weak laws, they come in fast, we get them, we release them, we get them again, we bring them out — it's crazy. The dumbest laws — as I said before — the dumbest laws on immigration in the world.

President Trump during California #SanctuaryCities Roundtable: "These aren't people. These are animals."

President Trump's comments were immediately criticized by multiple sources who likened his remarks to those of Adolf Hitler. For example, USA Today reported that Trump was using "rhetoric with a dark past" to describe "undocumented immigrants," noting that "Trump's not the first to use such rhetoric: Adolf Hitler justified the Holocaust by saying Jews weren't people but rats ..." The quotation attributed to President Trump was both inaccurate and left out the full context behind his remarks, which referred to undocumented and deported migrants convicted of crimes.

What was not evident from much of the news coverage of the event was that the president made his comments immediately after Fresno County Sheriff Margaret Mims conveyed her frustrations at what she presented as a historical lack of intelligence-sharing capabilities between the federal Immigration and Customs Enforcement (ICE) and local law enforcement agencies, with an emphasis on identifying and locating undocumented immigrants who have been convicted of crimes or are suspected of having committed crimes.

According to a White House transcript, Mims referred to "bad guys" and specifically named the violent criminal gang MS-13 immediately before President Trump's "animals" remarks (although MS-13 started in the United States and has many American citizens among its ranks):

Mims: Now ICE is the only law enforcement agency that cannot use our databases to find the bad guys. They cannot come in and talk to people in our jail, unless they reach a certain threshold. They can’t do all kinds of things that other law enforcement agencies can do. And it’s really put us in a very bad position.

Trump: And we’re suing on that, and we’re working hard, and I think it will all come together, because people want it to come together. It’s so ridiculous. The concept that we’re even talking about is ridiculous. We’ll take care of it, Margaret. We’ll win.

Mims: Thank you. There could be an MS-13 member I know about — if they don’t reach a certain threshold, I cannot tell ICE about it.

Trump: We have people coming into the country ...

The roundtable discussion can be viewed in its entirety below:

The day after his initial "animals" remarks, President Trump clarified that "I'm referring, and you know I'm referring, to the MS-13 gangs that are coming in":

The Trump administration has consistently presented the threat posed by MS-13 as immigration-related, although the MS-13 gang has its origins in the United States, and many MS-13 members are American citizens rather than undocumented migrants. Specifically (as we have previously written), the gang originated in 1979 in the Pico-Union neighborhood of Los Angeles.

In March 2016, ICE arrested 1,133 suspected gang members, 79 percent of whom were American citizens.

As well, under instructions from the Trump administration, ICE has executed a series of sweeps of suspected gang members in the past two years. In May 2017, the immigration enforcement agency arrested 1,378 suspected gang members, mainly in the Houston, Atlanta, New York, and Newark areas. Of those arrested, 933 (about 68 percent) were United States citizens.

When it came to Adolf Hitler, the meme was on much firmer ground.

As long as there have been men on the earth, the struggle between man and the subhuman will be the historic rule; the Jewish-led struggle against the mankind, as far back as we can look, is part of the natural course of life on our planet. One can be convinced with full certainty that this struggle for life and death is just as much a law of nature as is the struggle of an infection to corrupt a healthy body.

In other words, Nazis believed not only that Jews were not fully human, but that they were at the forefront of a global anti-human conspiracy.

As documented by Calvin College, Nazi propaganda was rife with imagery that compared Jewish people (not to mention various other "undesirables," such as Romani people, homosexuals, and those with disabilities) to various animals: rats and "vermin" spreading infection, parasitic insects feeding on "host" nations, and worms which caused rot. In Mein Kampf, Hitler described Jewish people as blood-sucking "spiders," "vermin," and "a parasite in the body of other peoples."

In response to our queries, Waitman Wade Beorn, a history professor at the University of Virginia, a consultant historian with the National Holocaust Memorial Museum, and an expert in the Holocaust, pointed to some other examples. Most strikingly, Nazi propagandist Joseph Goebbels, upon visiting quarantined Jews in the Łodz ghetto in 1939, wrote in his diary: "These are not humans, but animals" -- a statement used in a subsequent version of this meme: The exact quote in the Vocal Progressives meme appears not to be attributable to Hitler, but it is nevertheless a fair reflection of his stated views and a blunt summary of the Nazi concept of the "untermenschen."

White House.   "Remarks by President Trump at a California Sanctuary State Roundtable."     16 May 2018.