Donald Trump and two of his children are witnesses, not defendants, in a tax evasion lawsuit. 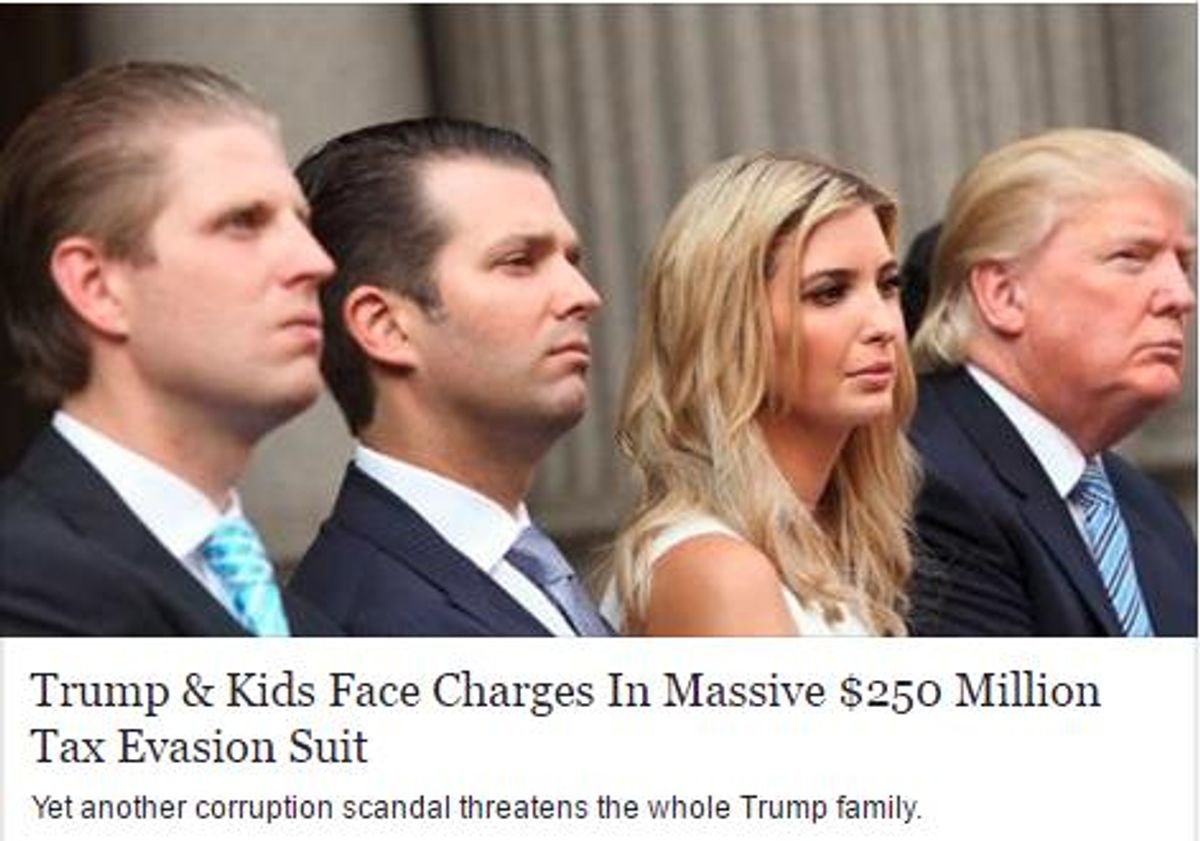 Donald Trump and two of his children have been named as witnesses in a tax evasion lawsuit brought against developers accused of not reporting $250 million in income.

Neither Donald Trump nor his children are defendants in a criminal or civil case involving the non-payment of $250 million in taxes.

On 18 July 2016, the Occupy Democrats web site published an article headlined "Trump & Kids Face Charges in Massive $250 Million Tax Evasion Suit," a misleading title given that the story's opening paragraphs clearly stated that Trump and his children were merely witnesses who haven't been "charged" with anything:

Presumptive Republican nominee Donald Trump and two of his children, Donald Jr. and Ivanka, have been named as material witnesses in the investigation of a tax evasion scheme concerning $250 million of unreported income. The case centers around Felix Sater, a man who secretly pleaded guilty to a massive stock swindle in 1998, which defrauded investors and funneled the money into his own pockets and into the coffers of Mafia families. There is a significant chance that Trump and his children will be charged with tax evasion.

Speculation aside, neither Donald Trump nor his children have been slapped with tax evasion charges, nor does the case involve $250 million in unpaid taxes. Rather, Trump and his children were named as witnesses in a tax fraud lawsuit against Felix Sater and others, defendants who are accused by lawyers Richard Lerner and Frederick M. Oberlander of evading taxes on as much as $250 million in income (leaving them owing about $7 million in New York state income taxes and about $35 million in federal income taxes).

Donald Trump's connection to the lawsuit is that it stems from four Trump-licensed real-estate developments, one of which was the Trump Soho New York, a luxury high rise in lower Manhattan. Donald Trump reportedly received tens of millions of dollars in fees and partnership interests from that development project, as did his son Donald Junior and his daughter Ivanka, making them all material witnesses in a tax evasion case filed not by the New York State attorney general, but by private citizens:

The four developments were all handled as partnerships. Partnerships are not taxed and are rarely audited because the profits are supposed to be reported as going to the partners personally. The lawsuit says the profits simply were not reported when Sater and others took their partnership profits and other income from the deals.

The state tax fraud lawsuit is known as a qui tam case in which citizens file as private attorneys general on behalf of the government. In effect Lerner and Oberlander are acting as prosecutors in the alleged tax fraud.

Sater controlled an investment firm named Bayrock, with offices in Trump Tower, and sought to develop branded Trump Tower luxury buildings in Moscow and other cities. Court papers show his salary in 2006 was $7 million, but [they] allege that was a pittance compared to his real income.

According to the Associated Press, Felix Sater once served as a senior adviser to Trump's real estate business, despite having a criminal background:

Donald Trump tapped a man to be a senior business adviser to his real-estate empire even after the man’s past involvement in a major mafia-linked stock fraud scheme had become publicly known.

Portions of Trump’s relationship with Felix Sater, a convicted felon and government informant, have been previously known. Trump worked with the company where Sater was an executive, Bayrock Group LLC, after it rented office space from the Trump Organization as early as 2003. Sater’s criminal history was effectively unknown to the public at the time, because a judge kept the relevant court records secret and Sater altered his name. When Sater’s criminal past and mafia links came to light in 2007, Trump distanced himself from Sater.

But less than three years later, Trump renewed his ties with Sater. Sater presented business cards describing himself as a senior adviser to Donald Trump, and he had an office on the same floor as Trump’s own office in New York’s Trump Tower.

[Sater] pleaded guilty in 1998 to one count of racketeering for his role in a $40 million stock fraud scheme involving the prominent Genovese and Bonanno crime families, according to court records. Prosecutors called the operation a pump-and-dump scheme, in which insiders manipulate the price of obscure stocks and then sell them to hapless investors at inflated prices. Five years earlier, a New York State court had sentenced Sater to more than a year in prison for stabbing a man in the face with a broken margarita glass.

Sater never had an employment agreement or formal contract with the Trump Organization and did not close any deals for Trump, Garten said.

For his part, Trump has maintained he has little knowledge or memory of Sater's working for his organization:

Trump has testified about Sater in a Florida lawsuit accusing the two of them of fraud in a failed high-rise project. Trump testified that he had a glancing knowledge of Sater and would not recognize him if he were sitting in the room.

Trump said during an interview that he recalled only bare details of Sater.

“Felix Sater, boy, I have to even think about it,” Trump said, referring questions about Sater to his staff. “I’m not that familiar with him.”

Although Occupy Democrats justified their misleading headline by stating that a "material witness is a secondary suspect to a crime," the tax evasion case referenced here is a civil lawsuit and not a criminal proceeding:

The government investigates the allegations, often with the assistance of the whistleblower's attorney, and decides whether it will join, or "intervene," in the case. The government intervenes in only a small percentage of qui tam lawsuits. Although whistleblowers have the option under the False Claims Act to pursue qui tam cases on their own, the chances of success are much higher when the government joins.

Eric Schneiderman, the New York State attorney general, learned of the case after it was filed in state court in August 2015 and has declined to intervene.