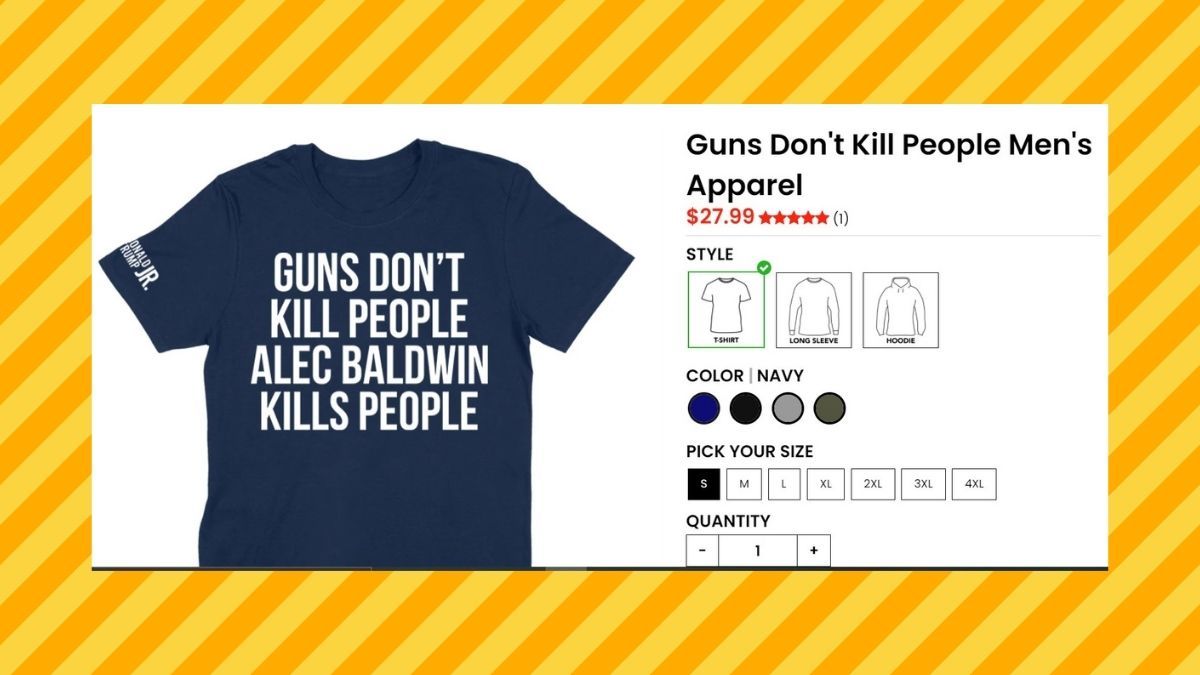 On Oct. 21, 2021, Halyna Hutchins, director of photography on the set of the movie "Rust," was accidentally killed when actor Alec Baldwin fired a prop gun. In the wake of this tragedy, Donald Trump Jr. started to promote and sell shirts that read: "Guns don't kill people, Alec Baldwin kills people." This is a genuine product that was available for purchase on Don Jr.'s website, shopdonjr.com.

The former U.S. president's son has also promoted these items on Instagram. In one Instagram story, Trump Jr. wrote, "Get Yours Today [at] shopdonjr.com."

In another post, he shared a doctored image that supposedly showed Baldwin wearing one of these shirts: The death of Hutchins is currently under investigation. As of this writing, nobody has been arrested. While it's possible that Baldwin will be held responsible in some fashion for Hutchins' death (in addition to being an actor, he was also producing the film), a search warrant noted that Baldwin was told the gun didn't have live rounds when he was handed the prop weapon.

Alec Baldwin didn't know the prop gun he fired was loaded with live ammunition and neither did the assistant director who handed it to him before the fatal shooting of a cinematographer on a New Mexico film set Thursday, a search warrant document said.

The assistant director yelled, "Cold gun," before the shooting that killed Halyna Hutchins, 42, and wounded director Joel Souza, 48, on the set of "Rust" at Bonanza Creek Ranch, according to an affidavit filed in a Santa Fe court.

The term "cold gun" is intended to indicate that the weapon did not have any live rounds, according to the document obtained by NBC affiliate KOB of Albuquerque and other news outlets.

Baldwin, who portrayed former President Donald Trump on "Saturday Night Live" and appeared in campaigns to oppose the influence of the National Rifle Association, was also the subject of disinformation in the days after the incident as social media users shared fake newspaper clippings falsely claiming that he was ranting about Trump or acting erratically in the moments before the shooting.